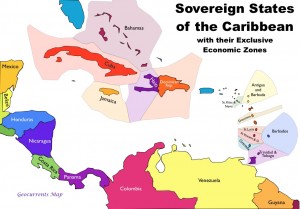 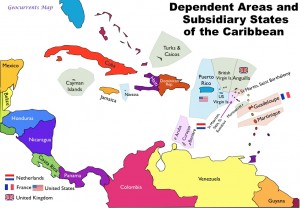 Despite the press of news elsewhere, Geocurrents has focused for the past two weeks on the Caribbean, highlighting the region’s geopolitical complexity. As in the Pacific, the welter of small islands in the Caribbean has encouraged the development of distinctive political arrangements. These two largely maritime regions are the main holdouts of Western colonialism. The post-WWII decolonization movement began a bit later here than in Asia or Africa, but by the 1970s it seemed that independence was in the works for most of the remaining dependent territories. Yet at the turn of the millennium, the independence movements had largely died out, with most local residents deciding that the disadvantages of sovereignty outweighed its advantages. Opting to remain under the ultimate authority of a distant metropole, however, has raised difficult questions about the nature of the resulting political subordination, as we have seen in regard to the Dutch zone.

This consideration of Caribbean geopolitics concludes with a series of maps designed to illustrate the region’s geopolitical complexity. The first image above shows the independent states of the region, along with their maritime exclusive economic zones; the second depicts the islands and archipelagos that remain tied to Western powers (Britain, France, the Netherlands, and the United States), whether as integral areas, dependent territories, or constituent countries. The remaining maps portray supranational organizations. Banding together in multi-state groupings is encouraged by the small sizes of most Caribbean islands. Yesterday’s post included a map of CARICOM, generally regarded as the most important Caribbean block. The third map posted today shows the Association of Caribbean States, a somewhat ineffectual organization dominated by mainland states that has excluded non-sovereign islands from membership. 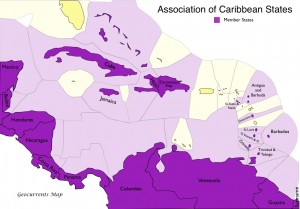 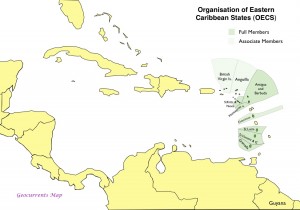 The penultimate map shows the much smaller but more tightly integrated Organization of Eastern Caribbean States (OECS). The OECS has a supreme court as well as its own currency, the East Caribbean dollar, used by all member states except the British Virgin Islands (which employs the US dollar). Much of the work of the group focuses on tourism, widely seen as the key to economic development. (As a recent report puts it, “The OECS Secretariat says, given the economic significance of tourism, the success of the OECS Economic Union will be enabled by the effective coordination of tourism policies in the region.”) The OECS includes only current and former British dependencies, but that may be open to negotiation. Saba and Sint Maarten expressed interested in joining before they became Dutch municipalities, and in 2008, Venezuela applied for membership. Although the OECS reported at the time that it was considering the Venezuelan request, a positive response seems unlikely.

The final map departs from geopolitics per se to take up the geography of sports. Culturally as well as politically, the multi-national West Indian Cricket Team is of some significance. Note that while focused on current and former British dependencies, it also includes the U.S. Virgin Islands and the Dutch special municipality of Sint Maarten. 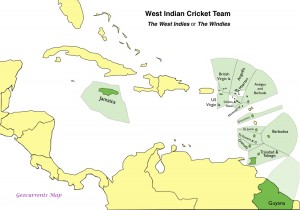