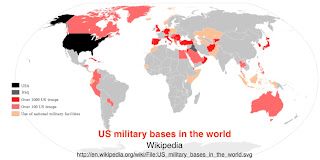 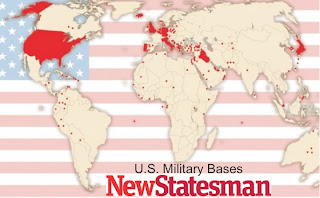 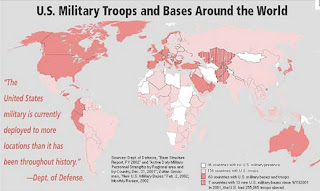 While I was lecturing the other week on the controversies surrounding U.S. military bases on the Japanese island of Okinawa, one of my students expressed astonishment at the existence of such facilities, wondering why they would be considered necessary. Although I am used to students questioning the wisdom maintaining foreign military bases, I had thought that the U.S. military presence in such countries as Japan, South Korea, and Germany was common knowledge. Evidently it is not. And even if most students do know about foreign bases, few realize how extensive the network actually is.

The maintenance of U.S. foreign military bases is a contentious topic. Some think that such a global projection of power is necessary for defense, monitoring, and even humanitarian assistance; others counter that it is increasingly unaffordable and counterproductive. For many writers on the left, the existence of foreign bases is proof that the United States is as much an empire as a republic. Their opponents note that foreign bases generally operate on the basis of invitation; when a country demands that U.S. forces leave, as Uzbekistan did in 2005, they do.*

Regardless of such debates, merely enumerating and mapping U.S. foreign military bases is a tricky exercise. Different sources put forward wildly divergent maps. One problem is the slippage between “military presence” and “military bases.” Cartographers critical of America’s global reach are sometimes inclined to map any military connection between the United States and another country as if it constituted a base of operations. But even if one relies on the official governmental list, problems persist. As a 2009 article in Foreign Policy Focus explains, “Officially the Pentagon counts 865 base sites, but this notoriously unreliable number omits all our bases in Iraq (likely over 100) and Afghanistan (80 and counting), among many other well-known and secretive bases.”

Of the several maps of U.S. foreign bases readily available on the internet, the one produced by Wikipedia is the least flawed. It is, however, three years out-of-date. Ecuador is thus shaded, as its Manta Airbase was employed by the U.S. military for drug interdiction. In 2008, however, the Ecuadoran Constituent Assembly outlawed foreign bases, and by July 2009 the U.S. military had vacated the country. The title of the Wikipedia map, moreover, is misleading; it refers to “U.S. Bases,” but the map shows non-base “presence” as well. The map could also be criticized for minimizing the global sweep of U.S. forces, but then again it could be faulted in the opposite direction. It ignores bases in dependent territories, such as the major facility on Diego Garcia in the British Indian Ocean Territory, but it notes vastly less significant sites, such as the one in Turkmenistan, which is largely limited to the “landing and refueling of transport planes at Ashgabat airport…”

However it is mapped, the U.S. military presence is clearly of global scope. Cartographic exaggeration hardly seems necessary for those opposed to foreign postings, but embellishment is often irresistible. The 2009 New Statesman map posted above, for example, includes shuttered bases in such countries as Uzbekistan and Ecuador, as well as numerous non-base sites in such countries as Chad, Niger, and even China. (Bizarrely, the same map shows Afghanistan without a single base.)

The New Statesman map is a model of cartographic rectitude compared to the 2002 effort produced by a group called “United for Peace” and entitled “US Military Troops and Bases around the World” (also posted above). The map appears on numerous websites, as a Google search of “US foreign military bases map” immediately reveals. Yet it grotesquely exaggerates American military reach, portraying such countries as Russia, China, Syria, and Burma as having hosted troops at the turn of the century. Hyperbole is by no means the only problem with the map. Note that the Chinese island of Hainan is mapped as a separate country (and given a base), as is Kashmir. The map’s key indicates a total of 272 countries, whereas the actual number of sovereign states is below 200.

U.S. military bases can have a significant impact on host countries. Such impacts can persist long after such bases have been closed, as the next Geocurrents post will explore.

* Guantanamo Bay in Cuba is the obvious exception here.