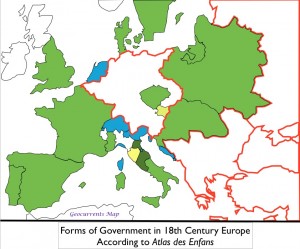 As we have seen, maps from the 18th century typically subdivide Europe in a different manner from historical maps produced today, focusing much less on sovereignty. Cartographers typically divided the region into a dozen or so “countries,” some of which were independent kingdoms and others dependent lands, and one of which was a supranational organization (the Holy Roman Empire). In atlas after atlas, the same divisions employed by Robert de Vaugondy that we examined last week reappear. Minor discrepancies are encountered; some cartographers separated Norway from Denmark and Ireland from Britain, and a few differentiated the southern Low Countries (modern Belgium, essentially) from Germany. By the end of the century, most mapmakers were portraying Prussia as a separate “country,” but only the Prussian lands in the east, not those within the Empire.

Enlightenment-era cartographers seldom explained their criteria for partitioning Europe. In a 1783 introductory text (Atlas des Infans*), however, the system of division is laid out in some detail. Europe, the anonymous mapmaker proclaims, is divided into sixteen pays, (countries), described as the principal states of the region: Portugal, Spain, France, Germany (Roman Empire), Switzerland, Italy, the Low Countries, Great Britain, Denmark, Norway, Sweden, Muscovy, Poland, Hungary, Turkey, and Prussia. He further notes that the Italy is “composed of many sovereign states”; as he earlier deemed Italy itself a “principal state,” the mapmaker obviously did not view the state per se as wrapped up with sovereignty.

Despite the criteria that he used for mapping, the author of the Atlas des Infans was concerned with sovereignty, and elsewhere in the text he outlined the sovereign entities of Europe. His main concern here, however, was not to detail all of the many states that might have been regarded as independent, as he ignored hereditary polities with a status below that of a Grand Duchy. His aim was rather to distinguish the varieties of sovereign authority then existing, as all independent states were not regarded as having equal standing. As a result, he carefully distinguished republics from non-republican polities, and then divided the latter category into five distinct forms based on the titles of their sovereigns. Europe, he informed his readers, had one ecclesiastical sovereign (the Pope, ruling the Papal States), three emperors (those of Russia, Germany, and Turkey), eleven kings, one archduke (ruling Austria), and one grand duke (ruling Tuscany).

Most of the kingdoms listed in the Atlas des Infans were also reckoned as countries (pays), but not all. The eleven “kings” of Europe were described as reigning over the kingdoms of France, Spain, England, Portugal, Poland, Denmark, Sweden, Prussia, Bohemia & Hungary, the Two Sicilies, and Sardinia. Although the emphasis was on the personal nature of the monarchies, no mention was made of the fact that the king of “Bohemia and Hungary”—oddly combined here—was also the Archduke of Austria and the Emperor of Holy Roman Empire; as was typical of the time, the jointly ruled collection of states that we refer to as the Hapsburg or Austrian Empire remained invisible. Note also that the “country” (or “principal state”) of Italy was partitioned among two kingdoms, one grand duchy and one ecclesiastical state (as can be seen in the map that I have created based on the political taxonomy laid out in the Atlas des Infans**). Later in the text, the author notes that northern Italy included nine sovereign states and central Italy three more. Most of these states, however, were excluded from the general discussion of Europe, apparently too insignificant to merit discussion.

When it came to republics, the Atlas des Infans was far more comprehensive, including even exiguous San Marino, a sovereign state that still styles itself the “most serene republic.” Of the republics listed, two others were essentially mere city-states, Ragusa (Dubrovnic) and Geneva, and two others city-states that controlled sizable hinterlands, Venice and Genoa. Of the republics listed, only the Swiss Federation and the United Provinces (the Netherlands) also counted as countries or principal states. The extra level of attention given to republics may simply reflect their rarity, but it might also convey concern about this radical departure from the norm of monarchy. 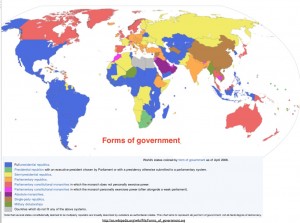 Modern-day world political maps rarely specify forms of government. What matters today is whether a given state is sovereign, as all sovereign states are regarded as forming equivalent individuals in the global community of nations. Specifying forms of government, moreover, is a surprisingly difficult exercise. The Wikipedia article on the subject does as well as might be expected, but the map that accompanies it, posted here, is of little use. I have on occasion use this map in an classroom exercise, removing the legend and asking students what it could possibly depict—and no one yet has guessed correctly. The problem, as is admitted in the key, is distinguishing the proclaimed form of government from the actual system of governance; that such democracies such as Costa Rica, South Korea, and Chile are classified alongside such non-democratic states such as Belarus, Uzbekistan, and Zimbabwe as “full presidential republics” is more than a little misleading. Iran too falls into the same cartographic category, although in the article that accompanies the map it is also more appropriately classified as a theocracy, along side only the Vatican City. Other discrepancies are also found between map and text. In the article, for example, Qatar is classified as an absolute monarchy, and Egypt as a “military junta state.” In an amusing and euphemistic understatement, the author deems Somalia as a “transitional state,” one in which “the system of government …, is in transition or turmoil and [is] classified with the current direction of change.”

An accurate mapping of the form of government still forces one to bypass sovereignty, as different subdivisions of composite states sometimes have different governmental forms. On the Wikipedia map, non-sovereign Hong Kong and Macao are depicted separately from China, as their governmental systems are completely diffferent. Note also dependencies are mapped separately from the states that hold their sovereignty. Almost all are put in the grey “other” category, yet Greenland is classified, like Denmark, a constitutional monarchy.

The underlying problem with classifying countries by their forms of government is one of pretense, as governments often pretend to be something that they are not. But as regular readers of GeoCurrents have seen, such charades run rampant through most of our schemes of geopolitical classification. As Stanford political scientist Stephen Krasner puts it, sovereignty is “organized hypocrisy.” Perhaps such a situation is to be expected; in the realm of diplomacy, elaborate facades are necessary. When it comes to educational and academic endeavors, however, it is our duty to strip away pretense and try to reveal what lies beneath. As such, it does us little good to pretend that Somalia is a “state in transition,” rather than the collapsed state barely hanging onto life through international support that it actually is.

* *Unfortunately, the map is slightly anachronistic, as I used a base map depicting European states in 1700s, whereas the Atlas des Infans depicts the situation in the mid- or even late 1700s.