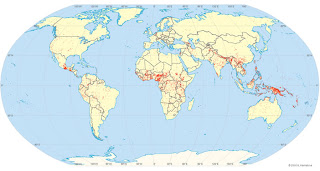 The Ethnologue (http://www.ethnologue.com/) is one of the best sites on the web for information about languages and linguistic geography. In the Ethnologue map shown above, a red dot is placed at the geographical center of each of the 6,906 languages listed in the organization’s database. One of the more interesting patterns visible in the map is the cluster of languages in the Nuba Mountains of central Sudan, one of the world’s most linguistically diverse locations. The region is noted in Sudan for its religious diversity as well. Many Nuba people follow traditional animist faiths, but others have converted to either Islam or Christianity 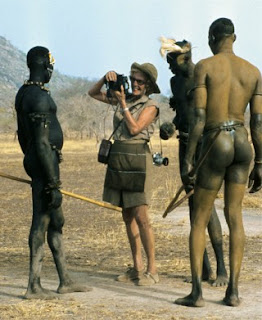 Unfortunately, very little information about the Nuba region reaches the world media. The area has virtually no roads, and access is further limited by the pervasive lack of security. What is known about the Nuba Mountains is not encouraging. During Sudan’s north-south civil war, many Nuba groups sided with the southern rebels; as a result, the region suffered bombing runs and other harsh reprisals by the central government. In the peace accord that ended (temporarily?) the war, no provisions were made for Nuba independence, much less autonomy. As a result, some experts think that the Nuba Mountains could become “the next Darfur.”

In the 1970s, the Nuba people came briefly to the attention of the wider world through Leni Riefenstahl’s bestselling work of photojournalism, The Last of the Nuba (original German title, Die Nuba). Riefenstahl, best known as Hitler’s cinematographer, was fascinated by the beauty of naked Nuba bodies at public ceremonies. According to Susan Sontag, The Last of the Nubawas “certainly the most ravishing book of photographs published anywhere in recent years” (from the Wikipedia article on The Last of the Nuba).