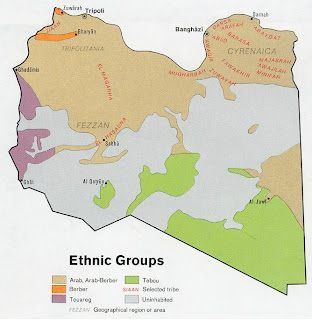 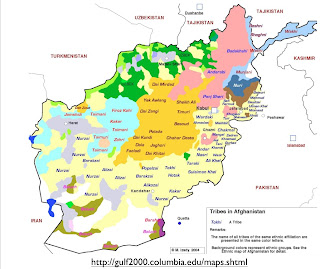 Unlike the Tunisian and Egyptian uprisings, that of Libya has a strong tribal component. When key tribal leaders rejected his regime, Muammar Gaddafi’spower began to evaporate from large segments of the country.

The phenomenon of tribalism in oil-rich Libya has caused some confusion in the media. A recent article in the Christian Science Monitor began by noting that Libya is “considered one of the most tribal nations in the Arab world,” yet went on to assert that “Qaddafi’s greatest and most lasting accomplishment may prove to be stripping [the tribes] of their political power as modernization also diluted their importance.” Only the “current chaos,” the article contends, has allowed tribes to “reassert their importance.” Most reports, by contrast, maintain that Gaddafi sought to manipulate rather than eliminate the country’s tribal structure, bolstering his own power by dividing military command, for example, along clan lines. Yet the consequences of such tribalized power structures for the country’s national government can be perplexing. A recent article attributed to the New York Times portrays them in stark terms: “Under Gaddafi’s four decades of rule, Libya has become a singular quasi-nation, where the official rhetoric disdains the idea of a nation-state, [and] tribal bonds remain primary even within the ranks of the military…” Yet the original Times article, as posted on its website, pulls back from such a blunt assessment, blandly contending only that “under Colonel Qaddafi’s idiosyncratic rule, tribal bonds remain primary even within the ranks of the military.”

Such confusion derives largely from the expectations generated by socio-political theory. Political modernization is supposed to dismantle traditional social features like tribal power structures, replacing them with the systematic administration of the bureaucratic state. Tribes thrive where state power is weak or non-existent, allowing a measure of security in an anarchic environment. By this logic, Libya, with its vast oil wealth, has undertaken a path of state-led modernization that should have undermined the country’s tribes. And to regard Libya as anything less than a nation-state would risk throwing our entire geopolitical world model into question, as all countries are habitually regarded as nation-states, political entities in which primary allegiance is given to the nation as a whole rather than to subsidiary aggregations such as tribes, ethnic groups, or regional communities. Tribal affiliation, by such thinking, is a vanishing feature of a by-gone world.

But despite countless assertions of Libya’s nation-statehood, its political structures have never matched the model. Far from attempting to replicate the forms of the European nation-state, Gadaffi has sought to build a different kind of government, as reflected in his country’s official name: the “Great Socialist People’s Libyan Arab Jamahiriya.” “Jamahiriya,” a term Gadaffi coined himself, is usually translated along the lines of “state of the masses” or “direct democracy.” According to official propaganda, the Libyan political model seeks to transcend not so much the national side of the nation-state model but rather the state itself. Jamahiriya, we are told, is based on “[the] rejection of the notion that the people need the structure of the state in order to regulate their lives. … [T]here is no need for a superfluous state structure which, however well monitored by the people, may threaten the revolutionary achievement of direct democracy….” Such a form of government, Gaddafi has insisted, is fitting for the entire world. As a result, Libya’s official ideology has been deemed the “Third Universal Theory.”

“Direct democracy” in Libya, as elsewhere, has promised much more than it has delivered. In practice, it has entailed autocratic rule, nepotism, and massive levels of corruption, much to the fury of the Libyan people. But by disparaging the normal structures of national government, the Libyan experiment has also left a vacuum of political organization—one that has been partially filled by the tribal groups. It is in this backhanded way that Jamahiriya has reinforced the tribal element in Libyan politics.

Because tribal groups in the greater Middle East have generally been regarded as anachronistic remnants destined to die out, they have rarely been mapped, and almost never in any detail. The 1974 CIA map of ethnic groups of Libya posted above in unusual in that it does show “selected tribes,” but its selective nature reduces its utility. Most of the country’s tribes are not depicted, including the largest, Warfalla, with an estimated one million members. As the continuing importance of tribal politics in the greater Middle East has been demonstrated not just by the upheaval in Libya but much more powerfully by experiences of the U.S. military in Iraq and Afghanistan, cartographic attention to this aspect of political organization is clearly in order. Thanks to M. Izady and Columbia University’s Gulf 2000 Project, comprehensive mapping of tribal groups in Afghanistan has now been carried out. Further efforts, one can hope, will be forthcoming.

* Many thanks to Shine Zaw-Aung for pointing out the discrepancies between the article on the New York Times website and the same article as reprinted in other newspapers.