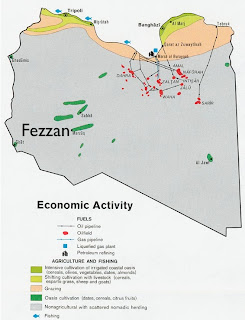 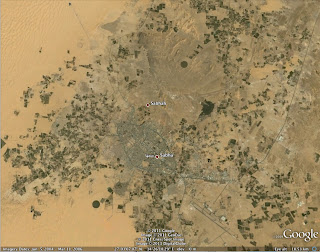 Compared to the Sahara, the deserts of North America hardly deserve the name. Whereas Las Vegas, the quintessential desert city in the U.S., receives about four and half inches (115 mm) of rain a year, and Death Valley, the continent’s driest spot, gets a little less than two inches (50 mm), roughly half of the Sahara receives less than eight-tenths of an inch (20 mm) annually. Over vast expanses of Saharan land, no vegetation can be found. The Sahara is also huge; roughly the size of the United States, it dwarfs all the deserts of North America put together.

But despite its extreme aridity, the Sahara contains pockets of relatively dense human habitation. Libya’s Fezzan region, located in the heart of the desert, has long supported sizable towns and extensive areas of irrigated agriculture, and is today home to almost half a million inhabitants. Most reside in oases where subsurface water allows the cultivation of dates and other crops. The oases of Fezzan tend to sprawl, with palm groves interspersed with uncultivated tracts stretching over many miles of terrain, punctuated with villages and small cities (see the Google Earth image above). On the economic map of Libya posted above, the Fezzan oases are deceptively large, as much of the land mapped in green is actually barren.

The extent of cultivated land in the Libyan Sahara has, however, vastly increased over the past several decades. The population of the region has also surged during the same period. While Fezzan held 60,000 inhabitants in 1954, by 2006 its population reached 442,000. Since the 1980s, it has grown at a much more rapid clip than the rest of the country. In 1984, Fezzan was home to 5.9 percent of Libya’s total population, whereas in 2006 it held 7.8 percent of the total. Relatively little of this expansion is linked to the oil industry, which is focused outside of Fezzan to the northeast. Recent growth here is associated instead with massive new irrigation facilities and with road-building and other infrastructural projects undertaken by the Libyan government. Some of this activity has been aimed at linking Libya more closely to sub-Saharan Africa, one of the cornerstones of Gaddafi’s ambitious foreign policy agenda.

As of March 1, 2011, Fezzan remained firmly under the control of the Gaddafi regime, with no indication of rebel activity in any of its cities or towns. The region’s loyalty to Gadaffi is linked to its relative isolation, as well as to the development funds that have been lavished upon it. But parts of Fezzan have also been singled out as bulwarks of the regime. Gaddafi attended secondary school in Sabha, the metropolis of the region (population 130,000). Many members of his own tribe, the Qaddadfa, subsequently relocated to the city, even though the tribe is based on the north coast. Sabha also supports a Libyan air base, which was linked to the country’s discontinued nuclear program, and has been used for rocket testing. The city is noted for its numerous migrants from sub-Saharan Africa, whose presence has been encouraged by Gaddafi and whose future in the country may be jeopardized by a regime change. Bands of Chadian and Nigerian mercenaries hired by the old regime are also reported to be present in the area. Although Gaddafi’s power in northern Libya has largely been reduced to Tripoli and its environs, it remains entrenched in the southwest. It will be interesting to see what happens in Fezzan if and when Gaddafi falls in north.

Regardless of the fate of the Gaddafi regime, it is unlikely that the new agricultural developments in the Libya desert will prove sustainable, as the next Geocurrents posting will explore.