“If the people of the NE want their independence from Thailand, I say go ahead. Go back to Laos, where your ancestors came from, and enjoy the life there.”

“Pappa, you may want to do some more research about history of Thailand before you tell the people in Isaan to go back to Laos. The Siamese themselves are descendants of the Lao people that became mixed with the native Khmer and Mon of Southern Thailand.” 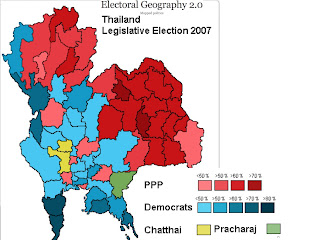 The massive protests currently threatening the government of Thailand are generally described in the U.S. press in terms of class dynamics. The red-shirt demonstrators, followers of the deposed Prime Minister Thaksin Shinawatra, are said to represent Thailand’s peasantry. Poor and politically marginalized farmers had benefitted from the economic and social security initiatives of the populist billionaire PM, and continue to rally fiercely to his cause. The yellow-shirt counter-protestors, in contrast, are portrayed as well-off members of the urban establishment, keen to maintain order and wary of any popular surge.

While such analysis captures much of what is significant in the current struggle, it misses a crucial geographical component. Most red-shirts hail from northern and especially northeastern Thailand. As a recent Bangkok Post article put it, “when Thais from other regions talk about Isan [i.e. northeastern] people, they dismiss them as ‘red all over’ – meaning Isan people are strong supporters of former premier Thaksin Shinawatra’s Puea Thai Party.” 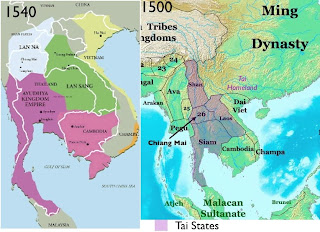 The Isan region is largely coterminous with the Khorat Plateau of northeastern Thailand, a low-lying sandstone platform noted for its thin and acidic soils, wet-season floods, and dry-season droughts. Considering its meager environment, Isan is densely settled; its twenty million people form roughly a third of Thailand’s population. Not surprisingly, it is the country’s poorest region. Lacking local opportunity, northeasterners often seek employment in prosperous central Thailand. Men typically work in construction; northeastern women are disproportionally represented in the sex business of Bangkok and Pattaya.

The idea that the redshirts should “go back to Laos” is rooted in the fact that the language of Isan is a dialect of Lao. Diet, music, and assorted cultural practices further link the people of Isan to neighboring Laos. Standard Thai-speakers from the core area of Thailand often look down on Lao culture as rustic and inadequately refined. The Isan people, proud of their own history, deeply resent such attitudes. Thailand’s Lao are hardly a minor outlier. Remarkably, the twenty million Lao-speakers in Thailand outnumber their counterparts in Laos four to one. 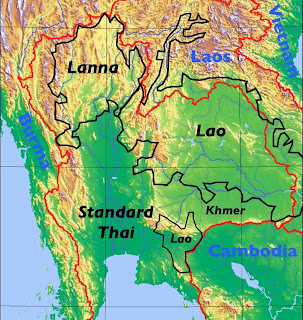 Lao and Standard Thai (which was once called Siamese) are themselves closely related languages of the Tai family, which originated in what is now Guangxi in southern China. Tai-speakers started moving into Southeast Asia roughly a thousand years ago, establishing small states and inter-marrying with – and borrowing culture from – local Khmer (Cambodian) and Mon peoples. By the 1400s, three sizable kingdoms had emerged: Ayutthaya (Siam) in what is now central Thailand, Lanna (Chiang Mai) in what is now northern Thailand, and Lan Xang (or Lan Sang) ranging from the Khorat Plateau into present-day Laos. All three were of mixed ethnicity, but they nurtured local dialects of Tai that eventually developed into three distinct languages. Siam, hooked into global trade networks, eventually grew strong enough to reduce Lanna and Lan Xang to vassalage. Unsuccessful Lao rebellions against intensifying Siamese rule in the early 1800s resulted in the forced relocation of Lao-speaking peasants into the western Khorat Plateau, further reinforcing the Lao majority in the area.

The kingdom of Siam came under pressure from French imperialism in the late 1800s. In response, Siamese monarchs modernized aggressively while playing the British off against the French. In 1893 and 1904, however, they were forced to cede lands in their northeastern periphery to France—the core of contemporary Laos. The French government wanted to annex the Khorat Plateau, but was unable to do so when Britain supported the Siamese cause. But Britain extracted a price: indirect British rule over a slice of Siamese territory on the Malay Peninsula.

In 1939, Siam’s fascist-influenced government renamed the country “Thailand” to help forge its different Tai-speaking peoples into a single nation. A concerted “Thaification” program followed, spreading Standard Thai (Siamese) through schools and government, discouraging the use of the Lanna and Lao scripts, and inculcating reverence for the Thai monarchy. The process was somewhat successful, as the people of northern and northeastern Thailand came to generally consider themselves members of the Thai nation. Certainly there is scant desire among the people of Isan to separate from Thailand and join Laos, a repressive county far more impoverished than the Khorat Plateau.

But if the people of northern and northeastern Thailand became Thai in the larger national sense, they did not thereby become Thai in the narrower cultural sense. The people of the area that was once Lan Xang not only maintain their cultural differentiation (see language map above), they also remain opposed to the country’s political establishment, based in central Thailand. Thaksin Shinawatra, a native son of Chiang Mai in the north, championed the non-Siamese Thai, and they have rallied to his cause—hence the strong correlation of language, history (political status in 1540), and electoral behavior shown in the maps above.