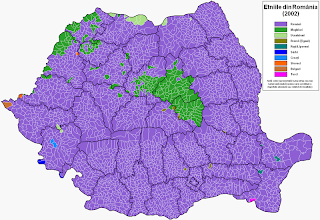 As the previous post indicated, many Hungarian-populated areas lie outside of Hungary’s national borders. More than half of Hungary’s territory was stripped away in the post-WWI settlement, although most of the areas lost had non-Hungarian majorities. Hard-core Magyar (or Hungarian) nationalists who dream of reclaiming these lands often advertise their views by displaying maps of pre-Trianon Hungary (the 1920 Treaty of Trianon having reduced Hungary to its current rump status). Extreme nationalist candidates, however, typically receive fewer than 10 percent of the vote in Hungarian national elections. 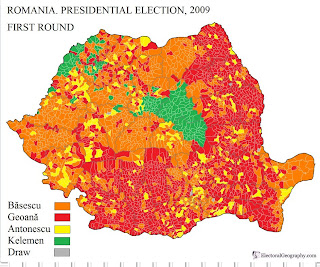 In neighboring countries, ethnic Hungarians usually support their own political parties that call for language and cultural rights as well as local autonomy for Magyar-populated areas. In the Romanian presidential election of 2009, the correlation between ethnicity and voting was exceptionally strong; the map on the upper left shows Magyar populated areas in green, while the map on the right shows districts that voted for the Magyar-based political party in green as well. Political integration in Romania obviously has some way to go.

The map on the right was taken from an invaluable website called Electoral Geography 2.0 (http://www.electoralgeography.com/new/en/). Visit it to find a treasure trove of electoral maps.