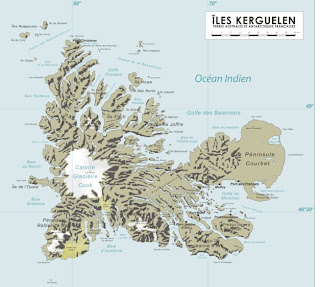 One of the most intriguing — and obscure — parts of France’s far-flung territorial domain is the Kerguelen Archipelago in the southern Indian Ocean, also known as the Desolation Islands. Dominated by Grande Terre Island, Kerguelen is one of the world’s largest remote oceanic landmasses; covering 2,786 square miles (7,215 km. sq.), it is roughly five times the size of Hawaii’s Oahu. Located far from the equator (at 49 degrees S.), the Desolation Islands are noted for their raw and windy weather. But if Kerguelen is always chilly, its maritime climate precludes real cold. Average monthly temperatures range from 46° F (7.9° C) in January to 36° F (2.3° C) in July.

Isolation and harsh climate have generated some ecological curiosities. Kerguelen’s butterflies, like its other insect species, have no wings; winds are so strong and persistent that flying insects would simply be blown out to sea. Like most oceanic islands, Kerguelen has no native land mammals. It does, however, support a number in introduced species, including rabbits, reindeer, rats, and feral house cats. The rabbits have proved destructive to the local vegetation, nearly wiping out the Azorerla “cushion plants” that once blanketed the lowlands, forming pillow-like structures up to a meter thick that were almost impossible to cross on foot. The Kerguelen cabbage, which once helped protect Antarctic mariners from scurvy, is also much reduced. Abundant lichens and mosses help support the islands’ estimated 4,000 reindeer, but they too are being over-grazed. French authorities have introduced an endangered sheep to one of the archipelago’s islands, but reproduction has been limited by the animals’ inability to adjust to the inversion of the seasons; they bear their young as winter approaches. 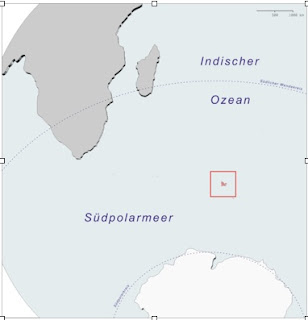 Kerguelen’s marine ecosystems are rich in wildlife, owing in part to the area’s giant brown kelp. Kelp forests surrounding the islands are thick enough to impede navigation, clogging ship propellers. Great rafts of kelp often wash ashore after storms, transferring nutrients from the marine to the terrestrial ecosystem. Whalers and sealers were formerly active in the area, almost wiping out local seal populations. Marine mammals are now protected, and their numbers have rebounded.

Kerguelen has no permanent human inhabitants, but it is staffed year-round. France maintains several research stations, one of which is devoted to satellite and rocket tracking. The archipelago’s winter population of around 70 swells to an average of 110 in the summer. People cluster around the “settlement” of Port-aux-Francais, which contains a chapel, hospital, library, gymnasium, and pub. The chapel is appropriately named Notre-Dame des Vents (“Our lady of the Winds”).

The Desolation Islands are a remnant of a long-lost continent that was once about a third the size of Australia. From roughly a hundred million years ago until 20 million years ago, most of the now largely submerged Kerguelen Plateau remained above sea level. The existence of such a sunken continent has provoked some imaginative speculation. One expansive website argues that several lines of “pseudo-primates” evolved into highly intelligent species that constructed elaborate civilizations on Kerguelen and went on to intervene in organic evolution on other continents. Even reputable sources have let their enthusiasm lead them astray. A 1999 BBC article entitled “‘Lost Continent’ Revealed” contended that “fifty million years ago, [Kerguelen] may have been covered in lush ferns, moist with tropical humidity. Small dinosaurs would have hidden in the undergrowth stalking their prey.” That would certainly be surprising, since dinosaurs were wiped out across the globe some 15 million years earlier, when a massive asteroid collided with the earth.