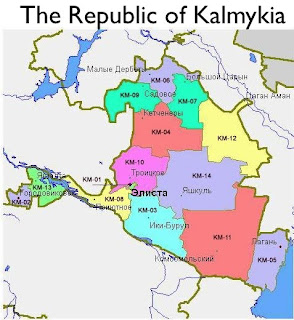 Certain parts of the world are so closely associated with a specific issue or activity that other matters tend to fade from view, at least as far as the international media are concerned. Consider, for example, Kalmykia, a Russian internal republic located northwest of the Caspian Sea. Larger in area than the Republic of Ireland, Kalmykia is a significant place with a fascinating history. In the international news, however, Kalmykia means one thing: chess. Today’s Google news search on the region yielded 23 articles: three concern inflation in Russia, one examines a local offshore oilfield, another mentions the republic’s improvements in beef processing, and the rest focus on chess.

The prominence of chess in Kalmykia stems from the efforts of the republic’s president, Kirsan Ilyumzhinov, a multi-millionaire who has been president of FIDE (the World Chess Federation) since 1995. A chess fanatic, Ilyumzhinov has made the study of the game compulsory in Kalmykia’s elementary schools. With a reputation for being both charismatic and authoritarian, Ilyumzhinov has bragged about introducing an “economic dictatorship” to the republic. 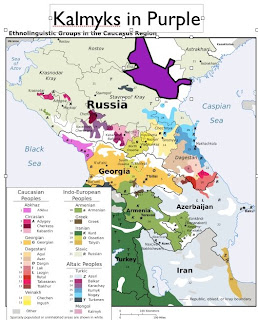 Kalmykia deserves notice for more than its role in the chess world. The Kalmyks, who constitute a bit more than half of the republic’s roughly 300,000 people, speak a Mongolian language and traditionally follow Tibetan Buddhism. The notion of a Tibetan Buddhist majority republic lying within Europe (as Europe is “continentally” defined) would strike most readers as odd indeed, but the Kalmyk presence in the region dates back to the early 1600s. The current Kalmyk community is actually a remnant group, as “Kalmyk” literally means “those who remained.” The far western Mongols had been important allies of the Russian Empire as it expanded into the Caucasus and Central Asia, but when the Czar’s government started to undermine local autonomy, most of the community undertook a vast – and deadly – exodus back to Mongolia. 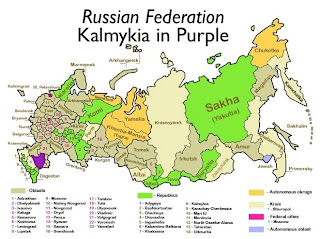 Much of Kalmykia’s subsequent history has been painful. Many Kalmyks sided with anti-communist forces during the Russian civil war, provoking harsh retribution after the war ended. In the 1930s, Stalin disastrously collectivized Kalmyk herding, resulting indirectly in some 60,000 deaths. He also attacked the Buddhist establishment, burning libraries and shuttering monasteries. Not surprisingly, many Kalmyks welcomed the German invaders in 1942; some 3,000 local men actually joined the German army, serving in three Kalmyk units. In retaliation, Stalin ordered the entire Kalmyk population deported to Central Asia in 1943. An estimated one in three perished in route. In 1957, Khrushchev allowed the Kalmyks to return, restoring their (supposedly) autonomous republic.

Today the Republic is doing reasonably well, thanks to oil, agriculture, and perhaps chess. The Kalmyks benefit from their relatively high levels of education and their international connections. Overseas communities are found today in many parts of Europe and in the United States. The U.S. center of the Kalmyk diaspora—Monmouth County, New Jersey—supports several Kalmyk Buddhist temples as well as a monastery. The head of the religious establishment in Kalmykia itself is Philadelphia-born Erdne Ombadykow (Telo Tulku Rinpoche), who was recognized by the Dalai Lama as a reincarnation of a Buddhist saint. Ombadykow spends half of each year with his followers in Kalmykia, and the other half with his family in Colorado.