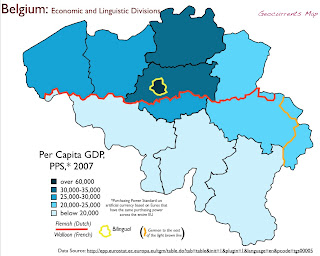 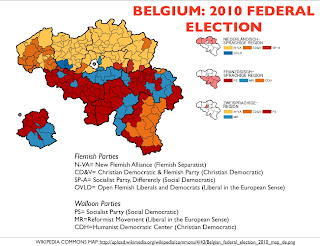 News stories have been coming out for months on the continuing failure of Belgium to form a government after the June 2010 election. On January 6, 2011, the BBC announced that two Flemish parties were yet again demanding “adjustments” to a compromise plan crafted by the mediator of the Belgian king. On the face of it, the controversies—focusing on tax policies, regional subsidies, and proposed readjustments of administrative and electoral divisions in the suburban fringe of Brussels—don’t seem insurmountable. But Belgium’s underlying troubles go much deeper.

The main problem stems from the country’s stark cultural and economic divide between the generally well-off Flemish- (Dutch) speaking north and the somewhat poorer Walloon- (French) speaking south. Almost all institutions are divided along these lines. Most significantly, no political party is pan-Belgian; even the Greens split between the Flemish Groen! and its Walloon counterpart, Ecolo. Local governments on either side harshly restrict the public use of the other region’s language. Flemish voters, moreover, continue to push for higher level of autonomy, many calling for outright independence. Exasperation over subsidies flowing to the socialist-ruled south helped the separatist New Flemish Alliance to gain first place in the June elections (although with twelve parties gaining seats in the Chamber of Representatives, it received a modest 17 percent of the total vote). As the New Flemish Alliance seeks the end of Belgium, it is hardly surprising that its parliamentarians would stymie the formation of a new government.

The prolonged inability to constitute a government is nothing new to Belgian politics. After the June 2007 election, 196 days passed before an interim government emerged. Belgium itself is thus coming to be seen as a political failure. Bart De Wever, leader of the New Flemish Alliance, recently proclaimed in a contentious Der Spiegel interview that his country “has no future” and will “eventually evaporate of its own accord.” He also flatly opined that “Belgium is a failed nation.” That last assessment is difficult to dispute, inasmuch as a “nation” is formally defined as a group of people united in their belief that they form a political community. Such national identity is sorely lacking among a large percentage of the Belgian population. Whether Belgium is a failed state is a different question. “Comatose” may be a better description.

State failure is generally seen as political catastrophe of the first order, bringing economic collapse, political chaos, and overwhelming insecurity. Yet the foundering of the Belgian state is associated with none of these things. To be sure, the financial consequences could be unwelcome, as credit-rating agencies are threatening to downgrade Belgium’s ranking, undermining governmental bonds. But overall, the abeyance of the national government has been rather inconsequential. The Flemish region and Wallonia, along with multi-lingual Brussels, have gained increasing autonomy over the past several decades. Before the latest crisis hit, the central state was already sharply limited, its powers and prerogatives having been pushed both down to the country’s three regions and up to the European Union.

De Wever’s image of an “evaporating” Belgium seems apt. A violent dissolution of the state is certainly not in the offing. The New Flemish Alliance is a staid, center-right party, not interested in intensive struggle. As most Walloons and more than a few Flemings retain vestigial allegiance to the country, complete dissolution seems unlikely. Any attempt to formally dismantle the state, moreover, would stumble on Brussels, the bi-cultural city-region that both groups claim for their own. Belgium will thus likely remain an officially sovereign country, but could still steadily diminish in its scope, perhaps eventually becoming a mere shadow of a state.

The gradual diminution of the Belgian state points to a major flaw in the standard geopolitical model. In most analyses of world politics, the sovereign state is held to be the essential, all-important unit. In both international law and popular perception, the independent country is regarded as an individual, distinct from all others, possessing an integrated geographical body, and acting with purpose and volition. Together, the 200-odd sovereign states form the international community, in which they interact as fully autonomous, juridically equal individuals. Compared with the level of the sovereign state, all other rungs of the spatial hierarchy are relatively insignificant. Independent countries are what ultimately matter, more than provinces, regions, or even autonomous areas, and certainly more than multi-state blocs such as NAFTA, ASEAN, or the Arab League.

Yet in the case of Belgium, the sovereign, internationally recognized state is simply not the most important government in the land. Wallonia and the Flemish Region are much more significant—as is the European Union. In this instance, as in many others across the globe, the standard model misses a much more complex reality. Regardless of how we conceptualize them, mutually recognizing official states are not necessarily what count. Some states, like Belgium, are fading; others, such as Somalia, are little more than fictions. Power is exercised at all levels of the spatial hierarchy, from the village to the United Nations. In some cases the “state” level is of less significance than others. In the state-based model, the pretense of power is often confused for its actual existence.

The failure of the Belgian state goes curiously unnoticed in the Fund for Peace and Foreign Policy’s influential “failed state index.” Strikingly, Belgium is classified here as one of the world’s most stable states, with a lower possibility of collapse than France, Germany, or the United States. This seeming paradox is explained by the fact that the index does not actually measure “state failure” at all, but rather the likelihood of systematic societal breakdown. Such collapse is not an issue in Belgium; as Der Spiegel put it in 2008, “Belgium is the world’s most successful failed state.”