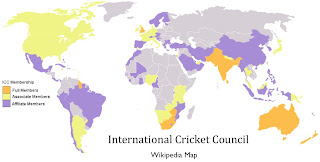 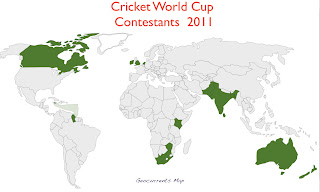 “Pakistan as a country is in serious trouble. It has just experienced the worst flood in memory. It is dominated by conflicts between the US and the Taliban and Al Qaeda… Pakistanis need something to escape from the harsh realities of day-to-day life. They need friends, they need help – and they need cricket.” – Dean Jones

“In the past five years, Pakistan has been accused of everything: match-fixing, spot-fixing, ball-tampering, drug offences. A coach died in suspicious circumstances. Then, worst of all, terrorists attacked a touring team. Pakistan has lost its right to jointly host the 2011 World Cup, which would have been a huge revenue raiser. Not now. And nobody really wants to play there.” – Dean Jones

The cricket world is now gearing up for its quadrennial world cup, to be held from March to May, 2011. The cup itself recently went on display in the Dubai Aquarium, Dubai being the headquarters of the International Cricket Council (ICC). The organization has come a long way since its 1909 founding, when, as the Imperial Cricket Conference, it included just England, South Africa and Australia. Next year’s world cup competitions will be held in South Asia, with games rotating among Sri Lanka, India, and Bangladesh. Pakistan has been debarred from hosting over security concerns and game-fixing scandals.

As is the case with rugby, international cricket is structured around the framework of sovereign states – with some notable exceptions. England and Scotland are separate members of the Cricket Council, while Ireland belongs as a unified island. Wales, however, does not enjoy separate membership, yet the Isle of Man does. The West Indies participates as a collectivity of disparate parts, encompassing ten sovereign states, three British dependencies, one U.S. dependency (U.S. Virgin Islands), and one island divided between a Dutch dependency and a French dependency (Saint Martin/Sint Maarten).

The most intense rivalry in cricket pits India against Pakistan, a topic honored with its own Wikipedia article. As the author notes:

A loss at the hands of the other was (and still is) considered nothing less than a national failure. Instances of players’ homes being pelted after a match was lost are not uncommon. Over-zealous supporters even burn effigies of a losing team’s players or even of individual players that had simply performed less than well.

But the Indo-Pak sports rivalry can also be turned to peaceful purposes; when the two countries want to reduce tensions, cricket matches offer a good “confidence-building” measure. On November 2, 2010, noted India singer Kumar Sanu earned headlines – and jeers – by simply proclaiming that “music and cricket can bring Pakistan and India closer.” He noted that players such as Shahid Afridi and Virender Sehwag are “equally popular in both countries.”

Like rugby, cricket is spreading. China will be fielding a team at the Asian Games, scheduled for November 12-27, 2010 in Guangzhou China. Some South Asian fans are worried about the possibility of impending Chinese competition. As former Pakistani star Javed Miandad recently put it:

The Chinese are very quick learners. Just as an example, they have a player who until three months ago did not know what cricket was, he was completely clueless. But today he can bowl leg-breaks as good as many professional players. Their complete devotion to mastering anything is simply awesome.