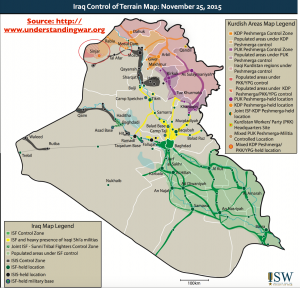 I have been generally quite impressed with the mapping of the current war in Iraq and Syria. This is a complicated and rapidly changing conflict, and I find it highly convenient that major newspapers, magazines, websites, think tanks, and the indispensible Wikipedia provide comprehensive and often-updated cartographic coverage. The best maps that I have found come from the Institute for the Study of War (ISW), which describes itself as “a non-partisan, non-profit, public policy research organization.” Although non-partisan, the institute does in general advocate forceful military actions by the United States. According to its mission statement, the ISW believes that:

[G]round realities must drive the formulation of strategy and policy. In pursuit of this principle, ISW conducts detailed, open-source intelligence analysis to provide the most accurate information on current conflicts and security threats. ISW researchers spend time in conflict zones conducting independent assessments and enhancing their understanding of realities on the ground. Through reports and timely events, our research educates military and civilian leaders, reporters, and the public to enhance the quality of policy debates.

(Although it is rather beside the point, the ISW is unusual in the field of security analysis in that is dominated by women. Three of its four leaders are women, and its founder and president is Kimberly Kagan, wife of Frederick Kagan, who in turn is the brother of Robert Kagan and the son of Donald Kagan, both of whom are well-known writers on security issues. Three of the six analysts at the ISW are female as well.)

As an example of the cartographic excellence of the ISW, I have reduced and reproduced here one its more recent maps of the situation in Iraq, by analyst Patrick Martin. Like many of the better maps depicting this conflict, it differentiates populated areas from sparsely inhabited zones while emphasizing the control over cities and transportation corridors. Its level of detail, however, is unsurpassed, especially when it comes to the Kurdish-controlled north. Although many maps of the current war in Iraq group the various Kurdish forces together, they are actually divided into several cooperating but still somewhat competitive contingents. Four Kurdish groups appear on this map. Two are based primarily in northern Iraq (the Kurdish Democratic Party [KDP]) and the Patriotic Union of Kurdistan [PUK]), one is based in northern Syria (the People’s Protection Units [YPG]), and one is associated primarily with southeastern Turkey (the Kurdistan Workers’ Party [PKK]). As can be seen on the map, several areas are under the combined control of two or more of these organizations. The situation is especially complicated in Sinjar, the main Yezidi area that was recently retaken from ISIS.

The ISW also produces detailed descriptions of its maps. The extended caption of the ISW map highlighted in this post (by Patrick Martin) is worth reproducing in full, as it captures many of the complexities and challenges encountered in the struggle between Kurdish and ISIS forces. As can be seen, ISW analysts are concerned about tensions existing among the various Kurdish contingents and among the region’s different ethnic and religious groups:

Kurdish forces recaptured the Yazidi-majority district of Sinjar, west of Mosul from ISIS on November 13 [2015]. Confrontations between the Kurdistan Democratic Party (KDP) and the Kurdistan Workers’ Party (PKK) will grow increasingly likely as both seek to control Sinjar, while Kurdish control over the mixed-demographic district is already leading to heightened tensions between Yazidis and Sunni Arabs. Kurdish forces included Peshmerga affiliated with the Kurdistan Democratic Party (KDP); PKK-affiliated fighters from the Syrian People’s Protection Units (YPG); Kurdistan Workers’ Party (PKK) forces; and local Yazidi militias. The city of Sinjar remains under mixed KDP Peshmerga and PKK control. Areas east of the Sinjar were recaptured primarily by the Peshmerga, with the exception of Tel Qasab, a village southeast of Sinjar, which was captured by a YPG-affiliated Yazidi militia. However, areas west of Sinjar reportedly involved few Peshmerga. These areas remain primarily under the control of the PKK, YPG, and PKK-affiliated local Yazidi militias. Villages north of Sinjar and Sinjar Mountain contain forces from all Kurdish fighting forces excluding Peshmerga affiliated with the Patriotic Union of Kurdistan (PUK), and it is unclear as to what specific villages are controlled by which forces. Areas north of the mountain have been under mixed Peshmerga and PKK control since before the Sinjar operation, which ISW is retrospectively representing on this map. ISW has also retrospectively assessed that the KDP Peshmerga do not have control over the Kasak intersection area, northwest of Mosul, which is still held by ISIS. KDP Peshmerga control the town of Kasak itself, but not the surrounding roads. ISW has thus adjusted the depicted control of terrain in the Kasak area.

ISW maps of other conflicts, such as that of Afghanistan, are also superb, as will be noted in a forthcoming post.