Geopolitical and Religious Conflict in the Spanish Exclave of Melilla 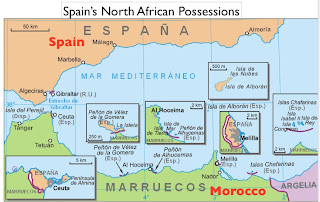 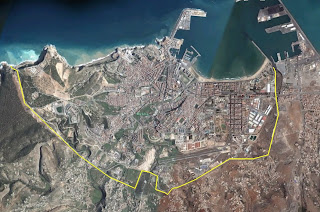 As mentioned in Monday’s post, tensions came to a boil this summer between Spain and Morocco over Spain’s possessions on the North African coast, Ceuta and Melilla. The squabble began in July 2010, when Spanish forces allegedly beat five Moroccan men in Melilla for carrying a Moroccan flag. The government of Morocco subsequently encouraged or at least allowed its citizens to stage two massive border protests, which blocked the delivery of fresh produce into the exclaves. The blockade, in turn, incited political sparring in Spain, as the center-right opposition party accused the government of “failing to defend adequately the Spanish presence in North Africa,” while the government in turn denounced the “disloyal” maneuvering of the opposition, which included an unannounced visit to Melilla by former prime minister José María Aznar.

By August 23, the crisis had apparently abated. Spain claimed a “diplomatic victory” in its negotiations with Morocco after the two countries agreed to “strengthen their security and police cooperation to handle issues ranging from immigration to drug trafficking.…” But whatever agreements were made between Morocco and Spain, it is unlikely they will permanently settle the conflict. Morocco’s demand for the two communities still stands.

It is unclear what prompted Morocco to proceed with the blockade in July; no public statements have been made. But speculations on both the origin of the struggle and its diplomatic consequences are rife. A recent Time Magazine article suggests that the Moroccan government views Spain as severely weakened by its economic crisis, and hence vulnerable to intimidation. Spain stakes a great deal on its role as mediator between Europe and North Africa—a position threatened by any struggle with Morocco. According to another recent article, “Morocco wants to ensure continued Spanish support for its efforts to hold onto the disputed Western Sahara; Morocco’s government has internal problems and raised this fuss as a diversionary tactic; or maybe it wants more European aid money and is badgering Spain as a way to get it.”

What is clear is that relations between the people of Melilla and their Moroccan neighbors are both intimate and troubled. An estimated 30,000 Moroccan citizens cross the border everyday. Many come to sell their labor, as Melilla is vastly more prosperous than Morocco. Others come to shop and smuggle, returning to Morocco with “everything from booze to toilet paper.” Such day-trippers are apparently much abused by Melillans, a people anxious about illegal immigration and concerned about the security of their vulnerable community.

Tensions in Melilla cannot be reduced to a simple struggle between the Spanish inhabitants of the enclave and their North African neighbors. Some thirty to forty-five percent of the city’s 73,000 residents are Muslims of Moroccan origin, mostly of Berber rather than Arabic stock. According to the Wikipedia, Melilla remains deeply divided: “The culture in this little city is thus virtually divided into two halves, one being European and the other Amazigh [i.e., Berber].” Other sources depict greater communal cohesion. According to one recent article, “the vast majority [of Melilla’s Muslims] say they have no interest in joining their poor neighbor. ‘We feel Spanish and we are Spanish,’ said merchant Yusef Kaddur, as he stood under a date palm tree outside the main mosque in Melilla’s bustling Muslim quarter.” The fact that Berbers have little power in Morocco, even though they constitute almost half of the country’s population, no doubt contributes to the lack of pro-Moroccan sentiments among Melilla’s Muslim inhabitants.

Melilla’s Jewish population has a storied history, but is now diminishing rapidly. As Spain’s former prohibition against Jews was not enforced in its North African exclaves, Jewish settlement was continuous. In the mid twentieth century, twenty percent of Melilla’s inhabitants were Jewish; today that figure has been reduced to around five percent due to emigration. According to a 2002 article in Religioscope, Ceuta and Melilla were formerly considered “paragons of interfaith harmony,” but that is no longer the case. Many Muslim youths, the author argues, have been radicalized in recent years, and have thus turned against their Jewish neighbors: “eggs, rocks and bottles have been thrown at Ceuta’s Sephardic synagogue while Jews were at prayer, Palestinian flags and graffiti glorifying Osama bin Laden have been painted on synagogues and churches, and graves in Melilla’s Jewish cemetery have been desecrated.”

Melilla is obviously a troubled and insecure place. Its most serious clashes in recent years, however, have focused not on sovereignty disputes or religious rivalry but on immigration, the subject of tomorrow’s post.