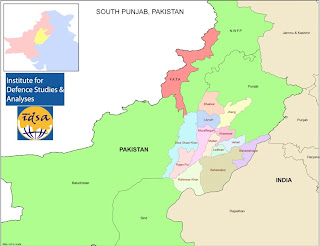 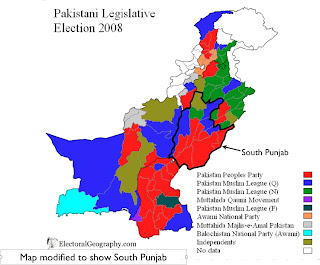 The culturally and linguistically distinctive southern half of Pakistani Punjab is, as noted yesterday, a hotbed of Islamist radicalism. According to Bill Roggio, “South Punjab teems with radical mosques and madrassas, which are used to indoctrinate Pakistani youths to join the jihad. Tens of thousands of members of these terror groups who have gone through training camps are said to be active in South Punjab.” Why south Punjab would be so much more inclined to extremism than North Punjab – or any other part of Pakistan outside of the Tribal Areas – is an interesting matter. North Punjab is a more agriculturally productive and prosperous area than South Punjab, but correlations between poverty Islamic radicalism are generally weak. Deeper issues are almost certainly at play.

The most convincing explanation that I have found comes from P.K. Upadhyay, writing for the Indian Institute for Defense Studies and Analysis. According to Upadhyay, the key factors are institutional and political. As he explains:

Compared to the rest of Punjab, this area has remained backward and cocooned in a time warp. The government and its agencies have exercised lesser control over South Punjab and have left its tribal oriented feudal structure intact. … The hold of local chiefs was, however, getting eroded for many years due to the expansion in influence and activities of officially supported religious hard line groups. These groups have been setting up their base in the area to recruit cadres and train them in connivance with the state for carrying out pogroms against Shias and other religious minorities within as well as for the jehad in Kashmir. Over a period of time, the traditional [chiefs] were pushed to the background and jehadist groups came to dominate the area completely.

South Punjab, in other words, has long been a politically marginalized area, lacking the administrative structures of the modern state. Until recently, the region was even denied its own linguistic and cultural standing, treated merely as peripheral variant of the Punjabi norm. When the Pakistani state under the presidency of Zia began to push politicized Islam in the 1980s, the region’s antiquated political structures were unable to resist to the hard-core Islamist political networks. Dissatisfaction with the northern-dominated Punjabi provincial government and the Pakistani national government has no doubt aided the militants’ cause.

Although radical Islamists have established a firm base of power in South Punjab, their violent program is rejected by many of the area’s inhabitants. Such attitudes are indirectly revealed through voting behavior. As the ElectoralGeography.com map posted above shows, almost all of southern South Punjab voted in 2008 for the quasi-socialist Pakistani Peoples Party of the late Benazir Bhutto, an organization detested by radical Islamists. In contrast, northern South Punjab, like North Punjab, generally supported the moderately Islamist Muslim League parties. Pakistan’s one hard-core Islamist party, the Muttahida Majlis-e-Amal, failed to take a single district in Punjab.

Some observers, however, expect that support for extreme Islamist organizations will soon increase in South Punjab, as well as in other parts of the country. Much of Pakistan has been devastated this summer by heavy monsoonal rainfall, and the flood crest is currently passing through South Punjab. Hard-line Islamic charities have proved more effective in delivering relief supplies than the government, enhancing their appeal. Due to the same dynamic, support for extremist groups increased in Kashmir following the 2005 earthquake.

Unfortunately, reliable information about South Punjab is difficult to obtain. As Bill Roggio reported in 2009:

“The Pakistani government has denied that terror groups are based in South Punjab. Just last week, the government barred foreign reporters from South Punjab, insisting they can only report from the area after obtaining a permit. ‘All foreign journalists are required to get permission from foreign affairs as well as from interior ministries for visiting any specific place especially in South Punjab,’ a senior officer of the Punjab government told the Press Trust of India. The official claimed that journalists published ‘twisted and unfounded’ facts about terror groups operating there.”

In general, finding any geographically specific information about Pakistan is a challenge, as we shall see in tomorrow’s post, the final one in this series.