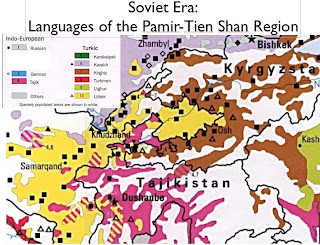 Ethnic conflicts have periodically broken out in former Soviet Central Asia. Clashes between Uzbeks and Kyrgyz in the Fergana Valley took hundreds of lives in 1990, and discord between Uzbeks and Tajiks in Uzbekistan continue to simmer. Yet ethnic strife of this sort is not a long-standing feature of the region. Central Asia’s various peoples have relatively long histories, but they are convoluted and intertwined. The current identity groups of the region – particularly Uzbek and Tajik – reached their modern forms only in the Soviet period.

The conundrums of ethnic identity in Central Asia stem from a long history of interaction. A thousand years ago, farmers and urban dwellers in the fertile belt to the west of the Pamir and Tien Shan mountains spoke Iranian languages, related to Persian. Pastoral nomads speaking Turkic languages, however, were becoming militarily and politically dominant, and as their power spread, so did their speech. Across much of the region, the sedentary peoples gradually came to speak Turkic dialects heavily infused with their original Persian and lacking the vowel harmony typical of Turkic and other Altaic languages. In the 1400s and 1500s, a literary language called Chagatai emerged on both sides of the Tien Shan, named after one of the successor states of the Mongol Empire. In the older cities on the western side, such as Samarkand, as well as in the south (modern Tajikistan), Persian (Tajik) remained dominant. In the northern grasslands, Western Turkic languages prevailed, including Kazakh and “Old Uzbek.” Beginning in the 1500s, the nomadic Uzbeks began to gain control over the agricultural and urban areas, without substantially spreading their language. In the Tien Shan highlands, another group speaking a Western Turkic language, the Kyrgyz, remained separate, differentiated in part by their practice of transhumance (moving their herds to different elevations with the seasons).

When the Russian conquered the area in the late 1800s, they discovered a fluid ethnic environment in which mode of life was often more important than language in determining identity. Chagatai had essentially died out, but its daughter tongues were spoken over most of what is now Uzbekistan as well as China’s Xinjiang province. In Russia’s new Central Asian territories, people speaking such dialects were generally called Sarts. But “Sart” was more of a lifestyle than a linguistic term; sedentary farmers and town-dwellers were often classified as Sarts even if they spoke Persian (Tajik). Multilingualism was common, and identity malleable, as reflected in a local saying: “A bad Kirghiz becomes a Sart, while a bad Sart becomes a Kirghiz.”

Soviet planners charged with identifying which ethnic groups should be granted their own union republics found the situation perplexing. As a result the political divisions of Soviet Central Asian changed several times in the early communist period. In the mid-1920s, the term “Sart” was officially declared pejorative and eliminated from the state’s ethnic taxonomy. Turkic-speaking settled peoples in the region were henceforth to be classified as Uzbeks, even though the Uzbek language at the time belonged to a different branch of the Turkic family (the original Uzbek tongue is now called “Kipchak Uzbek”). The new official language of the Soviet Republic of Uzbekistan was based on the dialect of the central Fergana Valley. Henceforth, this standard language was to spread through the republic, institutionalized in schools, government, and the media.

The invention of the new enthno-national category of Uzbek transformed the human geography of Central Asia. Peoples speaking Persian (Tajik) and those speaking Persian-influenced Turkic language had often been classified together as Sarts; now they found themselves assigned to different ethnic groups endowed with real political significance. Tearing the Sarts into two groups was not easy, resulting in convoluted boundaries as well as large minority populations in border areas. Uzbekistan has long tried to force its Tajik residents to drop their identity and become Uzbeks, resulting in considerable strife. Although official statistics maintain that only five percent of the people of Uzbekistan are Tajik, many think that the figure is much higher. According to the Tajikam website, “the real number of Tajiks living in Uzbekistan is believed to be nearly 42 percent (11-14 millions) of the population.” Meanwhile, as Uzbekistan was created, a region of common culture that formerly spanned the mighty Tien Shan range was coming to an end. What was once the Chagatai area, named for the second son of Genghis Khan, was now divided into quite distinctive Uzbek and Uyghur zones.

Although ethnic tensions have troubled Central Asia, conflicts between countries over resources, especially water, are now more significants, as we shall see tomorrow.