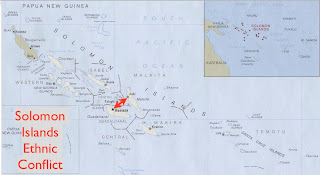 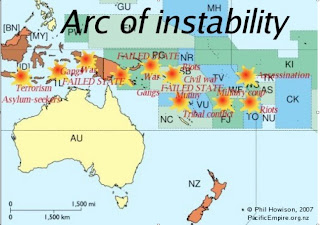 In trying to separate from Papua New Guinea, the people of Bougainville have sought full independence rather than union with Solomon Islands,* the country that encompasses the rest of the archipelago in which their island is located. The sentiment is not difficult to understand; Solomon Islands is a poor and unstable state beset with ethnic conflict.

Solomon Islands’ troubles intensified in the late 1990s, when feuding between the indigenous inhabitants of Guadalcanal and immigrants from the neighboring island of Malaita brought it to the edge of state failure. In 2003, the Honiara government requested international security assistance; Australia, New Guinea, and 20 other Pacific basin countries responded by sending a sizable peace-keeping mission, dubbed Operation Helpen Fren (Pidgin for “help a friend”). While reestablishing basic security, it did not generate stability. In 2006, rioters in Honiara torched the Chinese commercial establishment after rumor spread of Chinese businesspeople bribing members of parliament; the PRC had to send in chartered aircraft to airlift hundreds of its citizens to safety. Additional troops were deployed from Australia, New Zealand, and Fiji, but the Solomon Islands government fell, and its economy plummeted.

The turmoil of Solomon Islands is not unusual in its locale. Ethnic strife, governmental instability, and general insecurity characterize much of its immediate neighborhood. As a result, Australian commentators have deemed the area an “arc of instability.” This politically fraught region extends from eastern Indonesia through Melanesia to western Polynesia (see map). But while “arc of instability” is an evocative phrase, it is ambiguous; other authors have deployed it elsewhere (including Central Asia and the vast swath of the planet extending from the Caribbean Basin to Southeast Asia).

Although much of Melanesia is beset with local discord, one Melanesian government has set its sights on what it sees as a more fundamental ethno-political conflict: that occasioned by Indonesian’s annexation of Western New Guinea. On June 21, 2010, the parliament of Vanuatu unanimously requested an international investigation into Indonesia’s acquisition of, and continuing rule over, the territory. The conflict is often framed in religious and regional—or metageographical—terms. As reported by Radio Australia, Vanuatu’s Parliamentary motion asks “the UN General Assembly to direct the International Court [of Justice] to look into the manner in which the mainly Melanesian and Christian western half of New Guinea island was incorporated into the Asian and Islamic country of Indonesia.”

Vanuatu’s leaders expressed confidence that other Melanesian governments will follow their lead – with one notable exception: Papua New Guinea (PNG), the giant of the Melanesian world. On June 23, 2010, a Vanuatuan member of parliament chastised PNG for “being out of step with Melanesian opinion on the legality of Indonesia’s Papua province.” But Papua New Guinea’s reluctance is not difficult to understand, as it would be highly vulnerable to potential Indonesian reprisals. In its case, both military and economic considerations tend to outweigh the desire for pan-Melanesian cultural and geopolitical solidarity.

In next Monday’s post, we will explore what “Melanesia” means.

* The country’s official name is “Solomon Islands,” without the use of the definite article (“the”).