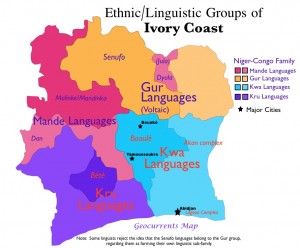 Careful map analysis reveals that the conflict in Ivory Coast cannot be reduced to a split between the Muslim north and Christian south, as is routinely suggested in the press. But it is structured around ethnic differences that have religious aspects. Today’s post seeks to demonstrate the struggle’s cultural parameters by comparing maps of electoral returns from the 2010 presidential election with those depicting Ivory Coast’s ethnic geography.

Before examining maps of the 2010 election, it is worth revisiting the basic ethnic divisions of Ivory Coast. Ivorian ethnicity is a complex matter, as the country has an estimated sixty-plus distinct ethno-linguistic groups. Most maps thus simplify the situation, as was the case with the Wikipedia map posted yesterday. Further simplification is useful for revealing role of ethnicity in the 2010 election. The map posted here highlights both broad, linguistically defined cultural divisions as well as the most politically charged ethnic groups. (For further explanation of the map, see the comments at the bottom of this post.*) 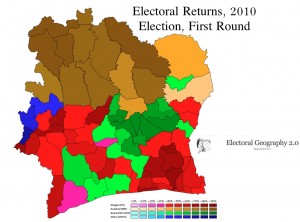 Thanks to the efforts of Electoral Politics 2.0, detailed maps of the 2010 Ivorian presidential election are readily available. Posted on the left is the pattern of the first round, in which only four of fourteen candidates garnered more than two percent of the vote. A quick comparison of this map with that of ethnic territories reveals close correlations. To highlight those connections, the next map abstracts areas in which one candidate scored an overwhelming victory in the first round (winning more than 70 percent of the vote) and overlays them on a lightened version of the ethnic map. Major candidates’ own ethnicity is also color coded; thus the areas that voted overwhelmingly for Laurent Gbagbo, who is Bété, are marked with diagonal purple lines, echoing the purple used to depict the Bété region, and so on. 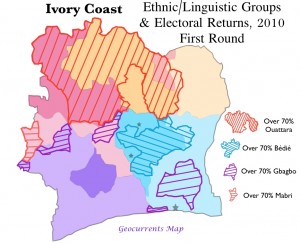 Layering in this way reveals several interesting patterns. For starters, three of the top four vote-getters fully dominated the election in their own ethnic homelands. The central Baoulé people, long Ivory Coast’s politically dominant group, voted overwhelmingly for their own candidate, Henri Konan Bédié, a former president of the country (1993-1999). Bédié, who had been accused of “stratospheric levels of corruption” while in office, polled reasonably well throughout southern and northeastern Ivory Coast, but not in the northwest and north-center. Those regions were dominated by Alassane Ouattara, of Dyula paternal descent, who won more than 70 percent of the vote even in animist Senufo country. Ouattra polled fairly well in most of the rest of the country, but in the Baoulé heartland he received less than ten percent of the vote. Finally, Albert Mabri trounced all other candidates in the relatively small area occupied by the Dan. The Dan are one of the “peripheral Mande” peoples; although their language is in the Mande group, they lack the heritage of political centralization found among the Malinke and they are largely non-Muslim. Although a small group, the Dan have played a significant role in Ivorian politics, largely due to the career of Robert Guéï. (Guéï was a military leader of Ivory Coast who became the country’s third president after the violent overthrow of Henri Bédié in 1999; he and his family were killed in the opening hours of the Ivorian Civil War in 2002.)

The geography of support for the incumbent, by contrast, did not follow the pattern of the other candidates. Laurent Gbagbo carried the major districts of his Bété-speaking homeland, but not decisively; he took only half of the votes, with Ouattara and Bédié splitting the rest. The Bété region is home to large numbers of immigrants from other parts of the country, most of whom likely cast their ballots their own ethnic “favorite sons.” But Gbagbo did crush the other candidates across most of the southeast, the economic heartland of Ivory Coast as well as its most Christian region. He also did extremely well in some of the non-Muslim Mande areas of the west.

Overall, one could say that the voting patterns in the first round of the 2010 Ivorian election reveal low levels of national cohesion. In democracies with high cohesion, political parties compete across all regions, contending for votes on the basis of ideological and policy differences rather than ethnic solidarity or regional favoritism. To be sure, some parts of Ivory Coast did exhibit balanced voting in the first round. In the Zanzan region of the far northeast, Bédié received 30 percent of the vote, Gbagbo 36 percent, and Ouattara 26 percent. In the extreme southwest as well, all three candidates polled reasonably well. Significantly, both areas are marked by high levels of ethnic diversity, populated by small groups that have not been able to stake a claim in national politics. 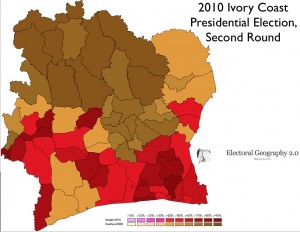 The final round of voting was limited to the two top contenders: Ouattara, who received 32 percent of the vote in the first round, and Gbago, who got 38 percent (Bédié had received 25 percent). It was a foregone conclusion that Ouattara would triumph in the northwest and the north-center, and that Gbagbo would win in the economically vital southeast. The contest really came down to the Baoulé core, a region that had spurned both Ouattara and Gbagbo in the first round. Recall that the Baoulé are a partly Christian but mostly animist group that dominated Ivorian political life for the first four decades of independence. As Ouattara is usually said to represent the hitherto largely excluded northern and Muslim elements of Ivory Coast, one might have expected the Baoulé to rally around his opponent. But that did not happen. Bédié eventually threw his support to Ouattara, who captured the Baoulé region decisively in the final election. To clarify the relationship between ethnicity and voting in the final round, the last map depicts the districts won by Gbagbo overlain on the map of ethnic divisions. As this exercise reveals, Gbagbo took most of southern Ivory Coast, crushingly so in a number of districts, but he failed in the Baoulé heartland. Why this happened is a question for another post. 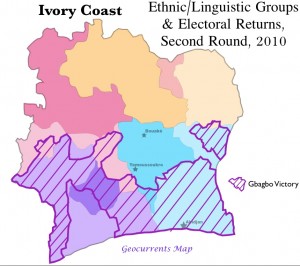 (*The GeoCurrents ethnic map of Ivory Coast first partitions the country into four linguistically based divisions, indicating with coloration the zones in which local languages fall into the Gur, Kwa, Kru, and Mande sub-families of the Niger-Congo language phylum. It also distinguishes the most important ethnic group within each of these broad divisions with a darker shade of the same color: Baoulé (Kwa), Bété (Kru), Malinke (Mande), and Senufo (Gur). Several other groups are noted with labels only: the Dyula (closely linked to the Malinke), the Dan, the Akan complex of ethnicities (which is sometime defined as including the Baoulé), and the so-called Lagoon complex in the southern Kwa region. Ivory Coast’s most important cities are also shown. Note that the ethnic territories so depicted are by no means absolute, as widespread migration has resulted in considerable mixing in many areas—one of the main factors in the recent unrest.  Note also that some linguists think that the Senufo dialects form their own language family, rather than belonging to the Gur group.)