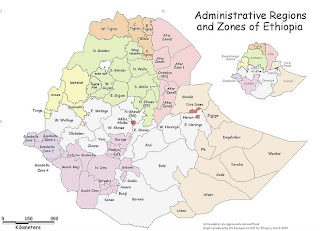 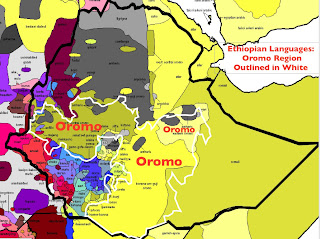 Ethiopia is known for a venerable Christian tradition and a record of successful resistance to nineteenth-century European colonization. Less often discussed is the depth of Islam in the country, whose population today is more than one third Muslim. Also overlooked is Ethiopia’s transformation into an imperial state in its own right during the late 1800s. Acquiring modern weapons to avoid colonial rule allowed the monarchy to embark on its own land-grabbing spree, conquering and incorporating large areas inhabited by people of strikingly different political and cultural traditions. This episode of Ethiopian imperialism remains invisible on most maps of late nineteenth and early twentieth century Africa, which portray the division of the continent as a strictly European affair.

The Ethiopian (or Abyssinian) kingdom had long been dominated by the Amhara people, with the Tigray and other Christian groups of the north also playing significant roles. Eastward conquests brought in Muslim areas, inhabited primarily by Somali and Afar speakers. Expansion to the southwest incorporated a large number of animist groups. The situation to the immediate south of Ethiopia’s historical core was more complicated. This was the homeland of the Oromo, a large ethnic group whose northward spread had vexed the Ethiopian monarchy in the 1600s and 1700s. Ethiopian kings intermarried with the Oromo, partly to co-opt them, and about half of all Oromos eventually converted to Christianity. As many turned to Islam, however, while a few retained their original beliefs. Today the Oromo people are roughly 47% Muslim, 30% Ethiopian Christian, 17% Protestant Christian, and 3% animist. Despite these religious divisions, the Oromo constitute the largest ethnic group in Ethiopia (some 25 million strong) and tend to have a strong sense of ethnic identity.

Ethiopia remained essentially a feudal monarchy until 1974, when the communist Derg (“committee”) seized power. The Derg attempted to demolish the traditional structures of Ethiopian society in a brutal and inept manner, but Amhara dominance of the state did not change. Regional and ethnic rebels gathered strength during the 1980s and made common cause against the Derg. In 1991, a multi-ethnic Ethiopian People’s Revolutionary Democratic Front seized power. Although the Front was a composite organization, its leading faction represented the Tigrayan area of the Christian north.

In 1996, Ethiopia’s new Tigrayan-dominated government restructured the country’s political geography, replacing thirteen provinces with nine ethnically based regions. Such a federal approach, it was hoped, would lessen the country’s severe regional tensions. But the new division of the country presented a few challenges. Trying to include all of the Oromo–speaking people into one region required intricate boundaries (see map above). Southwestern Ethiopia, one of the world’s more linguistically diverse areas, ended up comprising two ethnically composite regions. In the east, the historically important cities of Harar and Dire Dawa formed city-regions, as did Addis Ababa.

Ethiopia’s ethnic reorganization generated considerable enthusiasm in the international development community at first. It did not last long. By the early 2000s, complaints of continued Tigrayan domination mounted, especially in the Oromo region. Secession movements took root; today the Oromo Independence Movement, the Oromo Liberation Front, the Islamic Front for the Liberation of Oromia, and the Conference of Oromiya Peoples Liberation Front are all classified as actively seeking to split the state. Due both to poverty and conflicts with Ethiopian governments, many Oromos have been fleeing the country, often for Yemen across the Red Sea.

Recent reports highlight the plight of Muslim Oromo refugees in Yemen. As Voice of America News reported on March 4, 2010, “The Yemeni government calls many of those coming from Ethiopia ‘infiltrators’ and ‘sneakers’ and regularly announces mass arrests, and plans for deportations.” Ethiopia’s human rights record is increasingly criticized by the United States, generating bilateral tensions. The Ethiopian government has recently been jamming the Voice of America’s Amharic radio programming. Ethiopian president Meles Zenawi accused the station of broadcasting “destabilizing propaganda,” comparing it to the Rwandan radio station that propelled the 1994 Tutsi genocide. Perhaps not coincidently, Ethiopian national elections are scheduled for May of this year.

Although the Oromo region is currently Ethiopia’s main trouble spot, more serious human rights abuses may well be taking place in the western region of Gambella, as tomorrow’s post will explore.