As has often been noted, electoral patterns in the United States increasingly correlate with population density; in general, densely populated areas vote for candidates in the Democratic Party while sparsely settled areas vote for candidates in the Republican Party. As a result, major metropolitan areas generally exhibit a pattern of concentric rings, which turn from blue to red as one travels outward from the urban center. 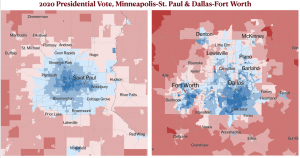 Different cities, however, show major variations on this theme. Minneapolis-Saint Paul exemplifies the annular pattern, with a dark-blue core surrounded by rings of lightening blue that eventually turn pink. Dallas-Fort Worth is more complicated. Here one finds urban cores that are just as blue as those in Minneapolis-Saint Paul, but the urban peripheries and suburbs are more 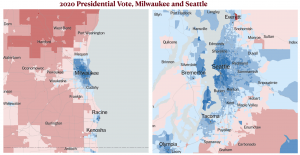 variegated, while the exurbs and enveloping rural areas are a darker shade of red. The greater Milwaukee area is notable for its steep gradient; as one leaves the city, blue yields to pink. Seattle, in contrast, has a gentle gradient, with light blue extending across and beyond the suburban fringe. (The dark red precinct west of Everett is misleading: it recorded all of three Trump votes – but no Biden votes.) 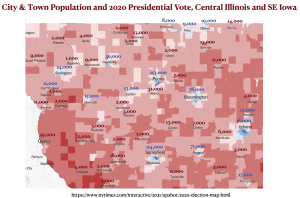 It is not just major cities where this density-dependent electoral dynamic plays out. As can be seen on the map of the 2020 presidential election in central Illinois and southeastern Iowa, all cities with more than 50,000 residents went blue, or at least had blue cores, whereas no town with fewer than 5,000 residents had any blue precincts. Pekin and Quincy were unusual in having more than 30,000 residents but no blue precincts in 2020. Yet even here, the town centers were light pink rather than red. 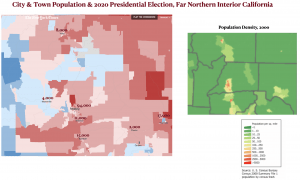 In a few parts of the country, this linkage between population density and voting behavior disappears. Consider, for example, far-northern-interior California, a white-dominated region with strong anti-California sentiments associated with the “State of Jefferson” movement. Although the cities and towns here are more pink than red, they lack blue precincts. The one exception is in Susanville, a small city economically based on prisons. But Susanville’s exceptional blue precinct is small, with just 54 votes cast. In contrast, many of the more remote parts of this region are Democratic voting. This is particularly true in the west, an area that has been heavily involved in cannabis cultivation.

The city of Redding, the “metropolis” of far northern California, has grown rapidly in recent decades, surging from under 17,000 people in 1970 to almost 100,000 today. Many of its newcomers have relocated from California’s major metropolitan areas, seeking lower prices and a more conservative social and political milieu. Although the Redding areas has many attractive natural features, its average July high temperature of 99.9 degrees dissuades the affluent, as does its political climate. Left-wing outdoor enthusiasts find places like Mt Shasta City, Weed, and Dunsmuir, all located in the mountainous blue-zone between Redding and Yreka, far more attractive. In 60%-Biden-voting Dunsmuir, population 1,700, class-three whitewater rapids are uniquely located in the middle of town.