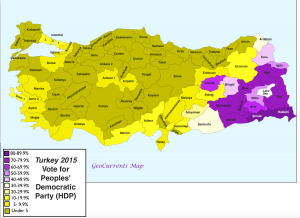 The new, leftwing Peoples’ Democratic Party (HDP) did relatively well in the 2015 Turkish election, taking 13 percent of the vote nationwide and sending 80 representatives to the Turkish Parliament. As noted in the previous post, the HDP’s main area of support is the Kurdish-speaking southeast, where it was the clear majority party. Its overwhelming victory in such provinces as Hakkâri and Şırnak, where is gained over 80 percent of the vote, is probably linked more to its embrace of Kurdish aspirations than to its insistently leftist orientation. As explained in the Wikipedia article on the party:

As a democratic socialist and anti-capitalist party, the HDP aspires to fundamentally challenge the existing Turkish-Kurdish divide and other existing parameters in Turkish politics. The party’s programme places a strong emphasis on environmentalism, minority rights and egalitarianism. When fielding candidates, the party employs a 10% quota for the LGBT community and a 50% quota for women. Despite the HDP’s claims that it represents the whole of Turkey, critics have accused the party of mainly representing the interests of the Kurdish minority in south-eastern Turkey, where the party polls the highest.

As the first map posted here shows, the HDP did extremely poorly over most of Turkey, gaining less than five percent of the vote in most provinces in central and northern Anatolia, areas generally noted for their conservative and nationalistic attitudes. But it did little better in the northwest (outside of greater Istanbul and Bursa), which is in general a secular-leaning region where the center-left Republican People’s Party drew a plurality of the vote. In Edirne, in the extreme northwest, the HDP took barely more than three percent of the vote. The HDP did better in the large cities of western Turkey, gaining between 10 and 15 percent of the vote in Istanbul Province and in Izmir. It is unclear how much of the support for the HDP in Istanbul came from leftwing ethnic Turks and how much came from ethnic Kurds, who number up to three million in a city of some 14 million (giving Istanbul a larger number of Kurds than any other city). 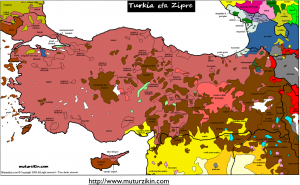 In eastern Turkey, electoral support for the HDP is correlated with Kurdish-majority areas. But how close this correlation actually is difficult to assesses, due largely to the fact that province-level ethnic data in Turkey is difficult to obtain. Even basic language maps of the country vary widely in their depiction of the Kurdish-speaking zone, due in part to the prevalence of linguistic mixing in many areas. Some maps, for example, show large pockets of Kurdish across much of central and south-central Turkey (see, for example, the Muturzikin map posted here). Such partially Kurdish regions, however, 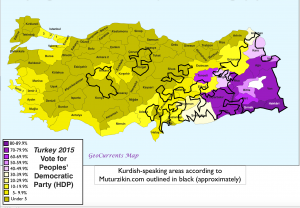 are not apparent on the electoral map. To illustrate this fact, I have overlaid the main Kurdish areas from the Muturzikin map on the 2015 electoral map. As can be seen, a number of provinces, such as Yozgat, that supposedly have a substantial Kurdish population gave very few votes to the HDP. To the extent that the Muturzikin mapping is accurate, we would have to conclude that support for Kurdish-oriented politics is to some extent limited to Kurds who live in the core zone of the ethnic group in southeastern Turkey. 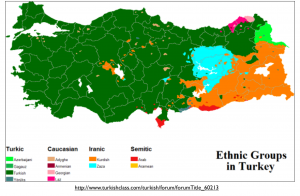 Other language maps, however, show a much more limited extent of the Kurdish population in central Turkey, as can be seen in the figure posted to the left. Again, I have overlaid the main Kurdish zones from this map on the electoral map. The fit here is much closer, although it might seem odd that the HDP gained only 38 percent of the vote in Şanlıurfa Province, which is depicted as mostly Kurdish. In actuality, however, the province has a mixed population of ethnic Kurds, Turks, and Arabs, and is estimated to be only around 47 percent Kurdish. Kars Province in the northeast, on the other hand, 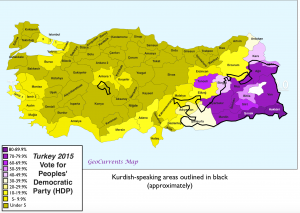 is estimated to be only around 20 percent Kurdish, yet it gave just under half of its votes to the HDP. This province, however, also has a large Azerbaijani population, many members of which might be attracted by the HDP’s more general support for minority rights. 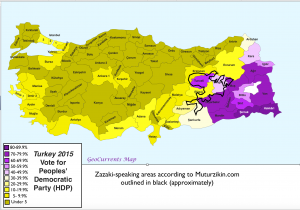 Tunceli Province in east-central Turkey fits the same patters as Kars, although in a more extreme manner; more than 60 percent of its voters supported the HDP even though the province lies outside of the Kurdish-speaking zone. But just because the people of Tunceli do not speak Kurdish does not mean that they are not ethnic Kurds. Actually, there is no single “Kurdish language,” as the two main dialects, Kurmanji and Sorani, are easily as different from each other as are French and Spanish. Most of the people of Tunceli speak Zazaki (or Zaza), which is more closely related to the languages of Caspian Iran (Gilaki and Mazandarani) than it is to “Kurdish.” But such linguistic 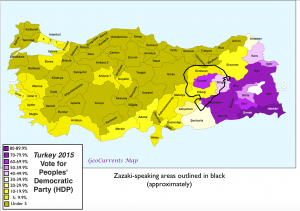 separation does not prevent the Zaza people from identifying as Kurds; according to the Wikipedia, most of them do. As a result, it should not be surprising that a clear majority of the people of Tunceli voted for the HDP. Yet in neighboring Elazığ Province, which is either predominately Zazaki-speaking or mixed Zazaki-Kurdish, the HDP received barely more than 15 percent of the vote. Elazığ, it turns, has long been noted for its conservatism and Turkish nationalism, despite its apparent ethnic background. As noted in the Wikipedia:

Elazığ is known for being conservative and patriotic. Not a single leftist party has managed to get a candidate elected in the past 34 years. Moreover, the BDP, an ethnic nationalist Kurdish party, has never managed to get an official elected to the Turkish Grand National Assembly in contrary to its neighbouring provinces Tunceli and Diyarbakır. Elazığ is also the most developed city (and province) in the region according to a report that was carried out by the Ministry of Development, making it the most developed region of Eastern Anatolia Region 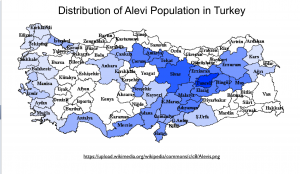 To understand the political disparities between neighboring Tunceli and Elazığ provinces, we must also look to religion. Importantly, Tunceli is the center of Alevism, a highly heterodox and generally quite liberal offshoot of Shia Islam. Alevis, who number up to 15 million, are scattered across much of Turkey, but only in Tunceli do they constitute the majority. But oddly, in Sivas Province in central Anatolia, which also has a large Alevi population, the HDP received a minuscule 1.8 percent of the vote. Obviously, neither religion nor ethnicity determines voting patterns, as many locally specific matters must be taken into account as well. In Tunceli Province, additional factors include its high levels of tertiary education coupled with the fact that an earlier Turkish administration shut down its university. As reported in the Wikipedia article on the province: “In 1979/1980 Tunceli had the highest number of students attending universities as well as the top entry points until the only higher education school [was] shut down and was converted to a military base. Tunceli University [,however,] was established on May 22, 2008.”

Another unusual feature of Tunceli is its concentration of Crypto-Armenians. As again noted in the Wikipedia:

Through the 20th century, an unknown number of Armenians living in the mountainous region of Tunceli had converted to Alevism. During the Armenian Genocide, many of the Armenians in the region were saved by their Kurdish neighbors. According to Mihran Prgiç Gültekin, the head of the Union of Dersim Armenians, around 75% of the population of Dersim are “converted Armenians.” … In April 2013, Aram Ateşyan, the acting Armenian Patriarch of Constantinople, stated that 90% of Tunceli’s population is of Armenian origin.