Historically, Vermont was one of the most Republican-voting states in the union. In 1936 it was one of only two states (along with Maine) to favor Alf Landon over Franklin D. Roosevelt, and did so decisively. But since 1988, Vermont has voted for Democratic presidential candidates. It is now by some measures the country’s most left-wing state. In 2020, Vermont gave a higher percentage of its votes to Joe Biden than any other state. Its democratic-socialist senator, Bernie Sanders, won his most recent election easily, gaining the support of 67.4 percent of Vermont voters. In the state’s 2022 U.S. Senate election, Democrat Peter Welsh overwhelmed Republican Gerald Malloy, who took only 27.6 percent of the vote. But these were all national elections; at the state level, a different picture emerges. Vermont not only has a Republican governor, Phil Scott, but an extraordinarily popular one at that. In 2022, Scott enjoyed a landslide election, taking 69.2% of the vote. Of all the sitting governors in the United States, only Mark Gordon of Wyoming received a higher percentage of the vote in the most recent gubernatorial election (see the map below). 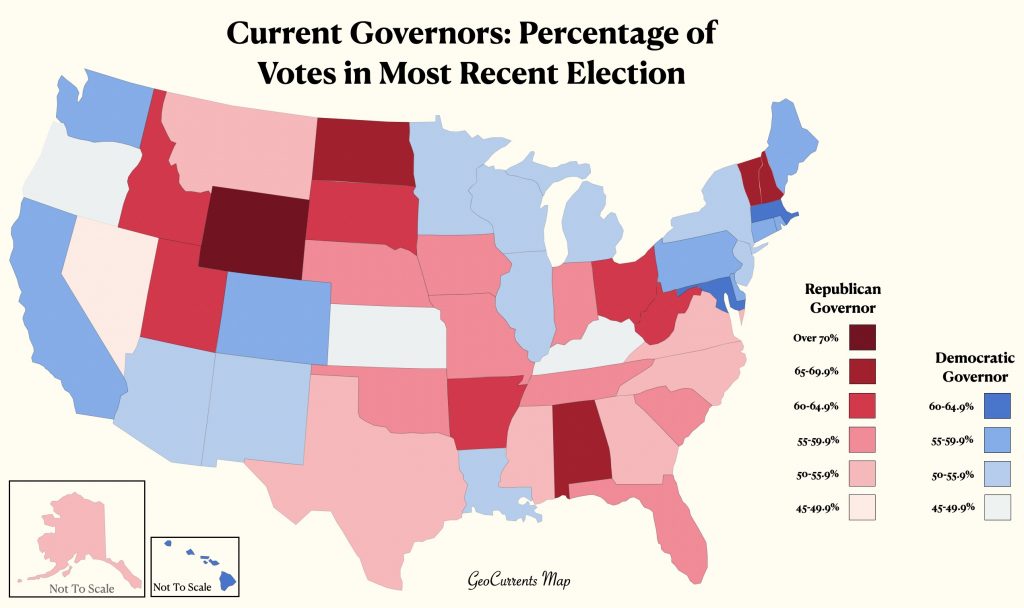 Vermont is not the only state with different political environments at the national and state levels. If one compares maps of gubernatorial and presidential elections, the general correlation is relatively close – but the exceptions are significant. As of early 2023, three “red” states will have Democratic governors (Kentucky, Kansas, and Louisiana), and three “blue” states will have Republican governors (Virginia, New Hampshire, and Vermont). Currently, deep blue Maryland and Massachusetts also have Republican governors, although in 2022 both states elected Democratic replacements. Of these seemingly incongruous states, Vermont is by far the most aberrant. It is extreme on both scores, being the most Democratic-voting state in recent national elections and the second most Republican-voting state in the most recent gubernatorial elections. 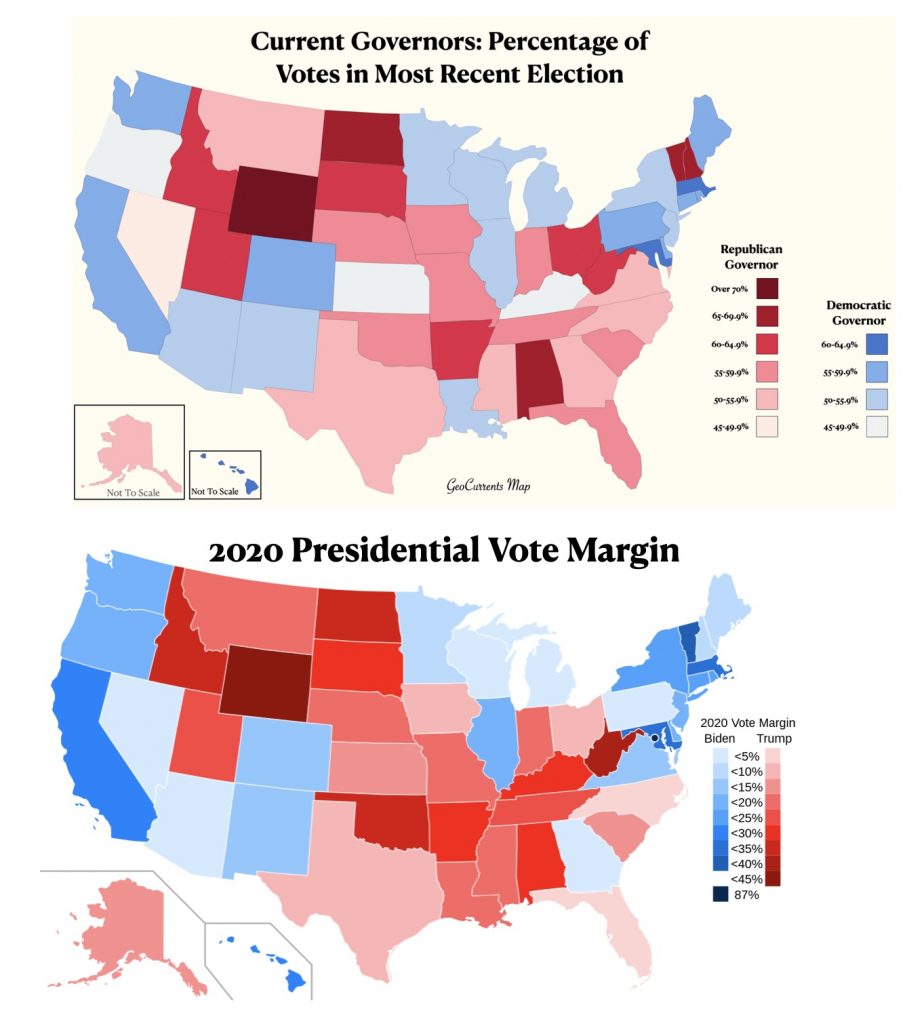 Like other recent Republican governors in New England, Scott occupies a left-center position on social and cultural issues and a center to center-right position on economic issues. According to his own self-description, “I and very much a fiscal conservative. But not unlike most Republicans in the northeast, I’m probably more on the left of center from a social standpoint. I am a pro-choice Republican.” Scott’s fiscal conservatism is probably key to his success. Vermont is a high-tax state, and evidently many of its residents want to hold the line on further taxation and expenditure.

Scott’s landslide 2022 victory was also related to the unpopularity of his Democratic opponent, Brenda Siegel. Siegel took only 23.4 percent of the vote, losing every county in the state (independents and write-ins took 5 percent of the vote). Siegel is a noted progressive activist, who focused her campaign on homelessness, the housing crisis, the opioid epidemic, drug-law reform, and climate change. As noted by VTDigger,

[Siegal] gained the most attention last fall when she slept on the Statehouse steps for 27 nights to pressure leaders to extend the state’s motel voucher program for Vermonters without permanent housing. The goal, she said, was to serve as a constant reminder to lawmakers about the realities of living outside, confronting them on their walks to work and pressuring them to act. After nearly a month of sleeping on the cold stone steps, she and fellow activists prevailed when the program was extended through the winter.

One might have expected Siegel’s political positions and steadfast determination to prove popular in a state as left-wing as Vermont. Electoral returns, however, indicate otherwise. Although the Democrats’ progressive wing has substantial clout within the party, it is regarded with suspicion by moderate Democrats and is rejected outright by most independents. As a result, progressive candidates often have a difficult time winning elections. But if Vermont Republicans had nominated a Trumpian populist, Siegel’s probably would have prevailed. Vermont Republicans, however, incline away from right-wing populism. In 2016, Donald Trump won the Vermont Republican primary, but did so with only 32% of the vote. John Kasich, a center-right if not centrist candidate, came close to winning, taking 30% of the vote.

In several deep blue states, most notably California, Republicans currently have little if any chance of prevailing in a gubernatorial contest. If they were to nominate a moderate candidate, success could be possible. But the Republican base in most parts of the country disdains center-right candidates as “RINOs,” or “Republicans in name only.” In California, where Donald Trump took 75 percent of the vote in the 2016 primary, Republicans are unlikely to nominate a candidate who has a serious chance of winning.

The United States has not only undergone pronounced political polarization in recent decades, but it has also entered an era of what might be called “negative politics.” In this environment, both parties are unpopular with the public at large, and many voters opt not for the party or candidate that they like the best, but rather the one they dislike – or even hate – the least. This unstable dynamic will be explored in a later post.