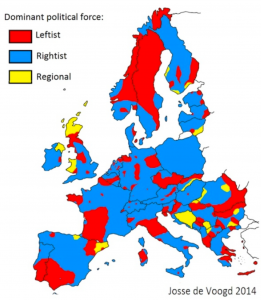 GeoCurrents reader Rafael Ferrero-Aprato recently brought to my attention an interesting map of political divisions in Europe made by the Dutch electoral geographer Josse de Voogd and reproduced by The Economist in 2014. Josse de Voogd notes the difficulties and limitations in making a map of this sort: “Some countries [are covered] in much greater detail than others and there are lots of political parties that are difficult to place ideologically. The information comes from a wide range of resources over a long time-span.” In general terms, the map seems reasonably accurate. But at the more local scale, the situation often gets too complex to be easily captured in a map of this sort. As Rafael Ferrero-Aprato notes in regard to his own country, Portugal:

Speaking for Portugal though, the red corresponds to the strongly leftists regions of Alentejo/South Ribatejo (because of the latifundium agricultural system) and Setúbal Peninsula (an industrial region). It includes also the moderately leftist areas of the north Algarve, lower Beira Interior and Lisbon. So far, so good.

The Alentejo, Setúbal Peninsula, Peniche and Marinha Grande were also areas of strong influence of the Portuguese Communist Party during the 1926-74 dictatorships, the only force that remained organized in the face of strong repression by the regime. As such, these regions saw numerous revolts during that time. 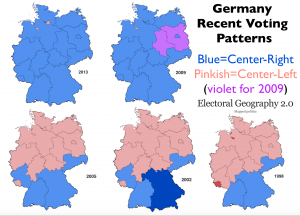 The only country that seems to be misconstrued on the map—at least for recent elections—is Germany. As the set of maps from Electoral Geography 2.0 indicates, German elections have recently been structured largely 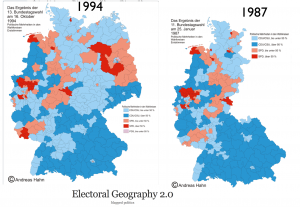 around a north/south division, especially those of 1998, 2002, and 2005. The 1994 and 1987 (West Germany only) maps fit better with de Voogd’s depiction, although it does seem that he unduly minimizes the left-wing Ruhr industrial area. 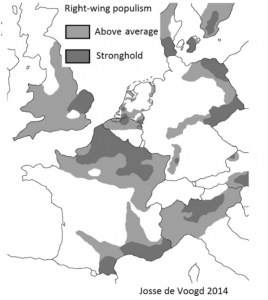 Unfortunately, the interpretation of de Voogd’s cartography by The Economist is not particularly enlightening. Much of the attention here focuses on environmental determinism, referring both to the map discussed above and to another map made by de Voogd, posted here to the left. As the noted in The Economist article:

Flat areas are more right wing The flat pains of southern Sweden, East Anglia, north-eastern France, Flanders and Padania vote for right-wing populists. Hilly regions like Cumbria, south-west France and most of the Alps tend to stick with the mainstream parties. This observation is not as facetious as it may seem. According to Garry Tregidga, an historian at Exeter University, hilly pastoral areas are generally characterised by left-leaning politics. One debatable explanation is that flat crop-growing areas benefit most from economies of scale, so fathers traditionally passed on their land to the first born, reinforcing differences in wealth and creating a more hierarchical political culture. In hilly, pastoral areas inheritances were more commonly split equally, which over the generations created a more egalitarian social structure and political tradition. Another (equally debatable) explanation is that arable farms need cheap vegetable-pickers and that the consequent foreign immigration into otherwise homogeneous rural areas stokes right-wing sentiment. 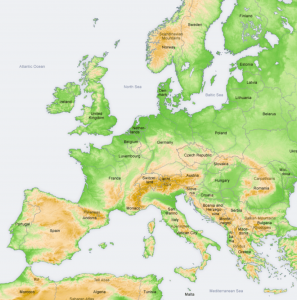 The Economist author simply gets the physical geography of Europe wrong. Upper Saxony in Germany and Provence in France are correctly depicted as right-wing populist strongholds, yet they are hardly flat areas. And as the “dominant political force” map indicates, many “flat” areas generally vote for the left. Examples here include southwestern France (Aquitaine is not “hilly,” despite what The Economist claims), the lowlands of Scotland, the Brandenburg region of Germany, the plains of Andalucía, and the lower Danube Valley. And what of upland area such as the Alps, the Carpathians, the Pindus, and the Cantabrian Mountains that are accurately depicted as more “rightist” in their voting patterns? As a comparison of de Voogd’s basic political map with a physical map of Europe shows, there is simply no pan-European correlation between topography and political viewpoints.

Like most geographers, I am often perplexed by the hold that environmental determinism retains on the public imagination. Actual evidence is rarely able to dislodge such fallacies. Evidently there is something deep comfortable about the idea that landforms and climate determine how we think.