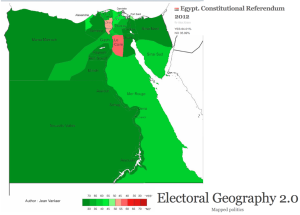 Egypt’s troubled and insecure transition to democratic rule has exposed some intriguing political geographical patterns. Yet at first glance, maps of recent elections do not seem particularly revealing. Consider, for example, the December 2012 Constitutional Referendum, a measure favorable to the ruling Muslim Brotherhood that critics claim restricted basic freedoms and democratic governance. The referendum passed with almost 64 percent of the vote nationwide, going down to defeat only in Cairo and two governorates (as Egyptian provinces are termed) in the Nile Delta (Gharbia and Monufia). Otherwise, no striking patterns are evident on this map. The June 2012 final round of the Egyptian presidential election, in contrast, seemingly shows Egypt divided longitudinally, with the east supporting Ahmed Shafiq (with the exception of the far northeast), a military, secular figure closely identified with the old regime of Hosni Mubarak, and the west voting solidly for the winning candidate, Mohammad Morsi of the Muslim Brotherhood. 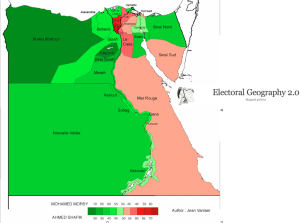 This east/west Egyptian divide, however, is more apparent than real. To grasp the actual nature of Egyptian electoral geography, it is first necessary to restrict discussion to the parts of the country that are actually inhabited, as most Egyptian territory has extraordinarily low population density. As can be seen on the map posted here, almost all Egyptians live in the narrow Nile Valley and triangular delta. If we restrict our vision to this zone, a different electoral-geographical pattern emerges. Instead of an east/west divide, we find a core-periphery division, with the core extending 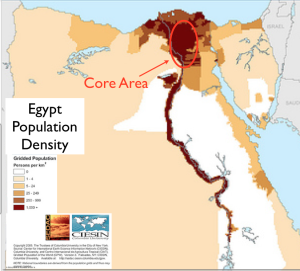 from greater Cairo into the interior portion of the delta, and the periphery including the Nile Valley of Upper (central and southern) Egypt and the fringes of the delta. 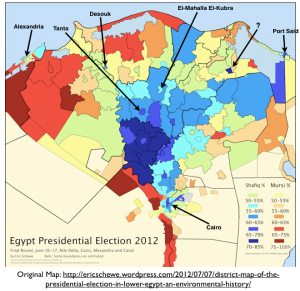 At this level, Egypt electoral geography can be viewed as pitting a strongly Islamist periphery against a core zone more skeptical of the religious agenda. The  December 2012 Constitutional Referendum, for example, received much less support in Cairo and the inner delta than it did in most others parts of the country, provided that one excludes the sparsely settled Red Sea and Southern Sinai governorates. Similarly, in the June 2012 final round of the presidential election, the winning candidate, Mohammad Morsi of the Muslim Brotherhood was triumphant almost everywhere except Cairo and the inner delta, which opted instead for Ahmed Shafiq, a figure closely identified with the old regime of Hosni Mubarak. (Many Shafiq-voters, it is essential to note, disdained him as a representative of the old regime, yet nonetheless preferred him to the Muslim Brotherhood’s candidate.)

With the exception of the city of Luxor, Morsi took the entire Nile Valley of Upper Egypt handily. Morsi did even better in the densely populated Fayoum Basin, an important off-shoot of the Nile Valley.

This core/periphery pattern is most clearly evident in the Nile Delta itself, as can be seen in Eric Schewe’s detailed map, posted here. As is clearly evident, Shafiq won an overwhelming victory in the central and especially the southern delta, whereas Morsi did well in the periphery, especially in the north and northwest. In a fascinating post, Schewe links this pattern to the history of land reclamation in the delta. Many of the areas that supported Morsi are marginal lands that came under irrigation and cultivation only in relatively recent times. As a result, they came to be characterized by large landholdings and numerous landless peasants. As the Mubarak regime was closely associated with landlord interests, Schewe contends, the poor population here was unwilling to support a figure closely associated with it. But as Schewe goes on to explain, this pattern does not necessarily obtain everywhere in Egypt:

While all of this doesn’t explain why a landless peasant would necessarily be a pious Muslim or want an Islamist government, it does explain why they would want to vote against an elitist ex-regime minister who curried favor with his landlord. The reclaimed land-Muslim Brotherhood pattern doesn’t hold everywhere. For example, in the South district of Port Said governorate, where the newest reclaimed land in the country is being rolled out of Lake Manzala in parallel strips, Shafiq took 66% (out of only 8500 votes). 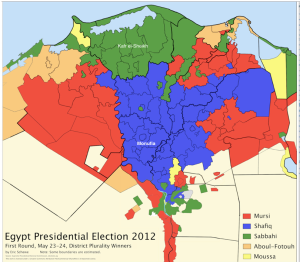 The results of the first round of the election, contested by numerous candidates, reveal a similar but not identical pattern in the delta. In the map here (also by Schewe), one can see the core zone voting again for Shafiq and both the eastern and western peripheries opting for Islamists candidates, either for the Brotherhood’s Morsi or the independent Aboul-Fotouh. Monufia governorate in the inner Delta particularly favored Shafiq, giving him more than 45 percent of its votes. The north, on the other hand, along much of Cairo, favored Hamdeen Sabahi, identified with the older Nassarist political movement, based on a secular, Arab-socialist ideology. Sabahi did particularly well in the northern governorate of Kafr el-Sheikh, taking over 45 percent of its votes in the first round.

The striking contrast between Kafr el-Sheikh and Monufia in the initial round of the Egyptian presidential election seems perplexing on first glance. Both are characterized by densely populated, intensively cultivated farmland dotted with towns and industrial cities, yet the former governorate strongly supported the Nasserist Sabahi and gave few votes to Shafiq, whereas in the latter governorate the situation was reversed. It is probably not coincidental that Hamdeen Sabahi was born in Kafr el-Sheikh, whereas Monufia was the birthplace of Hosni Mubarak as well as Anwar Sadat. Schewe thinks that machine-style politics were at play, arguing that, “This monolithic slab of dark blue tends to make me suspicious that the Shafiq voting machine not only used aggressive tactics in Al-Menoufiya [Monufia], but uniquely aggressive tactics.”

An urban/rural divide is also apparent on these maps, but not to the same extent as the split between the core and the periphery. Alexandria and Port Said stand out to some extent as having supported Shafiq in the final round, but the difference between the urban centers and the surrounding countryside is by no means overwhelming. Much the same can be said in regard to the important textile and cotton ginning cities of El-Mahalla El-Kubra and Tanta. Interestingly, El-Mahalla El-Kubra gave less support to Shafiq than its surrounding rural areas.

After performing this preliminary analysis, I turned to my colleague Joel Beinin, an expert in the political economy of Egypt, who was able to provide a much more nuanced explanation of these patterns. As Beinin explains:

Minufiyya Governorate, the section of the inner Delta where the pro-Shafiq vote was strongest, is the home of both Sadat and Mubarak and of Gamal Mubarak’s crony in chief and steel oligopolist Ahmad ‘Izz.  The two presidents invested a great deal in their native villages and the surrounding areas.  Izz employ(ed) well over 10,000 workers in Minufiyya in steel and ceramics in Sadat City in Minufiyya.  He had regularly mobilized them and peasants in the surrounding villages to vote for him in parliamentary elections.  There were reports that the networks that accomplished this are still in existence but were lying low.

Gharbiyya Governorate is the home of Misr Spinning and Weaving — 22,000 workers and the biggest industrial enterprise in Egypt.  I’m pretty sure that the no vote on the Constitution there is largely due to that.

One city that does stand out fairly strongly from its surrounding countryside in supporting Shafiq is Desouk, located in the socially conservative northwestern delta. Intriguingly, Desouk is noted for its religious nature, yet it gave more than 55 percent of its vote to the non-Islamist candidate. The key here is the city’s Sufi orientation. As the Wikipedia notes, “Desouk is a member of the Organization of Islamic Capitals and Citie, because there are important Islamic shrines in the city, like the tomb of Saint “Ibrahim El-Desouki” (13th century)…” The Desouki order of Sufi mystics, once closely tied to the heart of the Ottoman Empire, is still strongly associated with the city. And as Lee Keath and Sarah el Deeb explain in a Huffington Post article, “Shafiq also rallied … the widespread Muslim mystical sects known as Sufis, who fear the Brotherhood, which advocates implementing a harder line version of Islamic law.”

I am not able to offer any possible explanations for the strongly Shafic-voting area in the northeastern delta. Anyone?