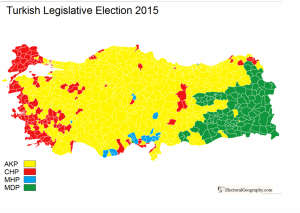 The 2015 Turkish General Election struck many observers as highly significant, due mainly to the drop in support for the previously dominant Justice and Development Party (AKP), closely associated with president and former prime minister Recep Tayyip Erdoğan. Although the AKP remains the largest party in the Turkish parliament, it gained only 41 percent of the total vote, thwarting Erdoğan’s plans for strengthening the presidency. To some extent, the election can be seen as a referendum on Erdoğan himself. Highly popular a decade ago, when Turkey’s economy was growing strongly and the country enjoyed peaceful relations with most of its neighbors, Erdoğan has seen his support drop as the economy has faltered, as regional tensions have intensified, and as Turkish democratic institutions have been partially undermined.

As the first map, from the invaluable website Electoral Geography 2.0, shows, the moderately Islamist, “center-right to right-wing” (according to the Wikipedia) AKP triumphed across most of Anatolia, while the “center-left,” moderately nationalistic, “Kemalist” Republican People’s Party (CHP) came in first in most of European Turkey and along most of the greater Aegean coastal region. The new, left-wing Peoples’ Democratic Party (HDP), closely associated with Kurdish nationalism, did relatively well, taking a majority of the votes in the Kurdish-speaking southeast. It received fewer votes overall, however, than the extremely nationalistic Nationalist Movement Party (MHP): 13 percent for the HDP vs. 16 percent for the MHP. But the MHP triumphed only in a few districts concentrated in the south-central part of the country, as its electoral support is much more spatially dispersed than that of the HDP. 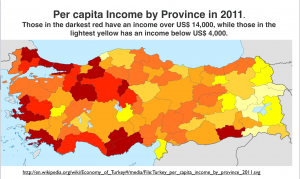 Ethnic and religious factors obviously played a large role in this election, as will be examined more closely in subsequent posts. For now, however, I will concentrate on economic factors. Can we find any geographical correlations between voting patterns and economic conditions? To address this question, we must first find a map that shows some measure of the economic ranking of the provinces of Turkey. Doing so, however, is not easy. A commonly reproduced Wikipedia map that purports to show “per capita income by province in 2011” is not adequate. This map is incomplete, lacking a key, but more problematic is the patterns that it depicts, which seem to be inaccurate. It places Mardin Province in the southeast, for example, in the highest economic category, yet the Wikipedia itself describes this province as suffering from serious poverty, unemployment, and out-migration. 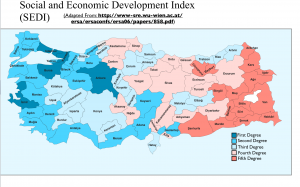 The best map of economic differentiation in Turkey that I have located come from an article entitled “Regional Disparities and Territorial Indicators in Turkey: Socio-Economic Development Index (SEDI)” by Metin ÖZASLAN, Bülent DINCER, and Hüseyin ÖZGÜR. This map shows generalized levels of socio-economic development; note that I have remapped the original data with a different color scheme in order to emphasis disparities. The main pattern here is quite clear: western Turkey is much more prosperous than eastern and especially southeastern Turkey. Coastal areas also tend to be more developed that interior regions, although here the differences are not pronounced. More striking is the fact that the provinces containing Turkey’s largest cities, Istanbul, Ankara, Izmir, and Bursa, are all in the top category of socio-economic development. 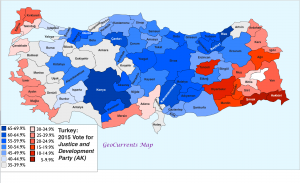 In comparing the map of the electoral showing of the AKP (Erdoğan’s party) with that of socio-economic development, only one pattern stands out: the impoverished southeast voted heavily for the left-wing Peoples’ Democratic Party (HDP). In some respects there is noting unusual here, as poor areas often vote for economically leftist parties. But the Turkish HDP is also noted for its culturally left positions, positions that might not be expected to gain widespread support in a mostly rural, peripheral portion of a developing country. Here, I think, one must look to the political aspirations of the 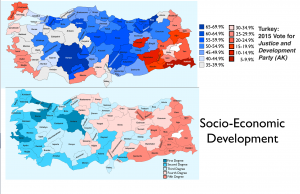 Kurdish people, as will be explored in a subsequent post. Otherwise, the 2015 Turkish voting patterns do not correlate strongly with those of socio-economic conditions. Some very poor provinces voted strongly for the AKP, such as Bayburt, while some wealthy provinces, such as Kocaeli, gave a plurality of their votes to the AKP. Intriguingly, the party’s highest level of support came from provinces in the middle of the socio-economic spectrum: Konya and Rize.

One problem with generalized socio-economic rankings is the fact that they do not capture recent changes and general developmental tendencies. Turkey, for example, has over the past 15 years seen the rise of several so-called Anatolian Tiger cities, which have surged ahead in economic production and productivity. These cities have been widely associated with Islamic values, which differentiate them from the older and 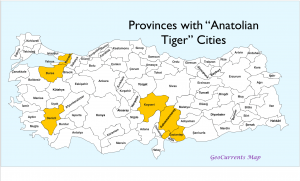 historically more secular Turkish industrial cities, such as Istanbul, Ankara, and Izmir. According to the Wikipedia article on the “Anatolian Tigers”:

Beyond their shared characteristics in an economical perspective, references have also been made, especially in international media, to different political connotations within the term, including by associating this capital with Islamic values or extending its whole under such definitions as “Islamic capital” or “green capital”. … A 2005 study by the European Stability Initiative that was focused on Kayseri uses the term “Islamic Calvinists” to define the entrepreneurs and their values. 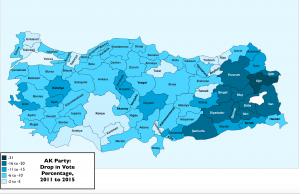 I have crudely mapped the most important of these “Anatolian Tigers” by highlighting the provinces in which they are located. Note that these provinces vary fairly widely in terms of their levels of socio-economic development. They also vary quite a bit in regard to their level of support for the AKP, although in general they did gave a higher percentage of their votes to Erdoğan’s party than did the “average” Turkish province. What I find most intriguing, however, is the fact that two of these “Tiger” provinces, Gaziantep and Kayseri, showed a major drop in support for the AKP between 2011 and 2015. Perhaps Turkey’s recent economic problems have played a role here. The AKP’s most precipitous drop in support, however, was found in the southeast, a phenomenon most closely linked to the emergence of the Kurdish-oriented Peoples’ Democratic Party.