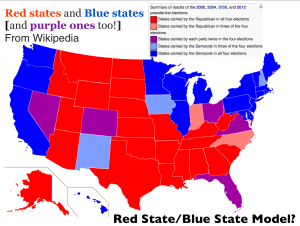 Since the 2000 election, it has been common to divide the United States into a “Red America” of reliably Republican-voting states and a “Blue America” of reliably Democratic-voting states, a maneuver that highlights the relative scarcity of “purple” or swing states. As can be seen in the Wikipedia map posted to the left, “blue” states are concentrated in the Northeast, the upper Midwest, and the Pacific Coast, with New Mexico forming something of a blue outlier.

This red-state/blue-state model has been subjected to much criticism. To begin with, it reverses the color scheme used more widely across the world, in which red signifies the left and blue the right. This system is still used in Dave Leip’s excellent on-line Atlas of U.S. Presidential Elections, but it now proves highly confusing for most Americans. But deeper problems are also encountered. Perhaps most significant is the fact that there are many “red” areas in most “blue” states, just as there are quite a few “blue” zones in most “red” states, as can be seen in maps based on county-level data. Such maps, however, exaggerate the extent of “Red America,” as Democratic-voting areas tend to be more densely populated than Republican-voting ones. Equally problematic is the fact that many areas are roughly split between the two major parties, and should thus be mapped as purple. 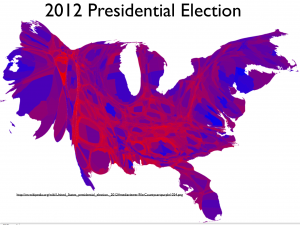 Such problems are surmounted to some degree in red-purple-blue cartograms, such as the one posted here of the 2012 presidential election. This map, however, has caused a minor controversy in my own household, as I find it gorgeous and informative while my wife considers it hideous and confusing. Some experts in color perception also object to red-purple-blue maps, contending that we 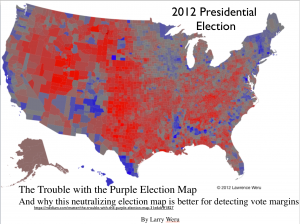 perceive purple differently if it is surrounded with blue than if it is surrounded by red. Larry Weru thus adds green to the mixture, and ends up with a blue-gray-red map that more clearly shows counties in which presidential elections are competitive.

But regardless of such consideration, the maps of the 2014 U.S. election clearly reveal a major “red-shift” in voting behavior. Intriguingly, this shift is least evident on the map of the incoming U.S. Senate. Despite the fact that the Republicans picked up several seats and now command a clear majority in the Senate, the basic red-blue regional pattern still holds on this map, albeit with an expanded “purple” zone of mixed representation. But on the map of the incoming 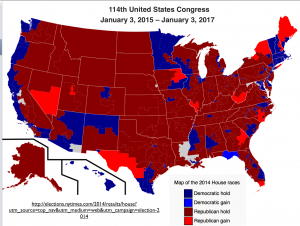 House of Representatives, much of the supposedly “blue” mid-Atlantic and Great Lakes regions appear rather as a sea of red, with only major cities voting for Democrats. Outside of New England the Pacific Coast, few non-metropolitan districts without Hispanic or African-American majorities supported Democratic candidates. Most of those that did are located in the Upper Mississippi region, centered on Minnesota, as will be examined in a subsequent post. 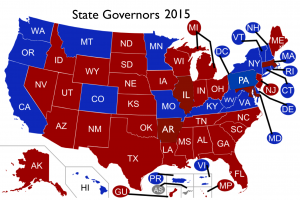 In the gubernatorial and state legislative election of 2014, somewhat different patterns are encountered. Overall, the “red shift” was pronounced here as well, with the Republicans picking up several state governors and legislative 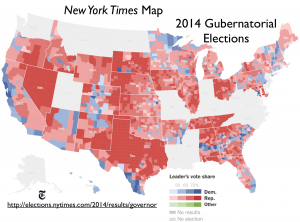 houses. (In Illinois, generally regarded as a solidly “blue” state, the Democratic gubernatorial candidate won only a single county, although it [Cook] is the second most heavily populated county in the country.) But when it comes to such non-national elections, 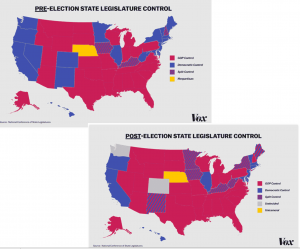 Republicans can be more competitive in “blue” states just as Democrats can be more competitive in “red” states, as they can run on platforms to the left and right, respectively, of their national parties. Thus a Republican champion of gay marriage can win the gubernatorial race in deep-blue Massachusetts, while such Republican states as Missouri and Kentucky still have Democratic governors (who, admittedly, were not up for reelection in 2014).

With the rightward swing of the 2014 election, very few U.S. states are now dominated by the Democratic Party at both the national and local levels. Only four small states—Connecticut, 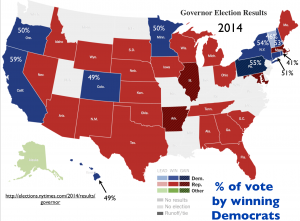 Delaware, Rhode Island, and Hawaii—remain “fully blue,” meaning that all their senators and members of the House of Representatives, as well as their governors, are Democrats, and that the Democratic Party also controls both of their state legislative chambers. (Vermont also fits into this category in an informal sense, as its independent senator Bernie Sanders is a democratic socialist.) California and Oregon almost fit the pattern as well, but in both cases their conservative eastern areas have voted for Republicans for the House of Representatives. And as the final map indicates, even in some of these reliably blue states (Oregon, Connecticut, Rhode Island), the Democratic gubernatorial candidates won with thin margins.

Although the 2016 election could produce very different patterns, the United States must be currently viewed as a mostly “red and purple” land.