Some clear racial voting patterns are evident in the 2022 Brazilian election. A map of Brazil’s relatively densely populated eastern strip, for example, shows a clear north/south divide. Its northern half is mostly non-white and voted heavily for Lula da Silva, whereas its southern half supported Bolsonaro and has a population of mostly European descent. To be sure, a few exceptions are found, such as the mostly white, Lula-voting area in the extreme southeast. When one looks at maps of Brazil as a whole, however, the situation is revealed to be much more complicated, as it does in maps of individual Brazilian states and regions. The second map posted below indicates the Brazilian states in which Bolsonaro found his highest level of support in 2022. As can be seen, four of these states have mostly non-white populations. All four of them are located in Brazil’s western zone of deforestation and agricultural expansion. 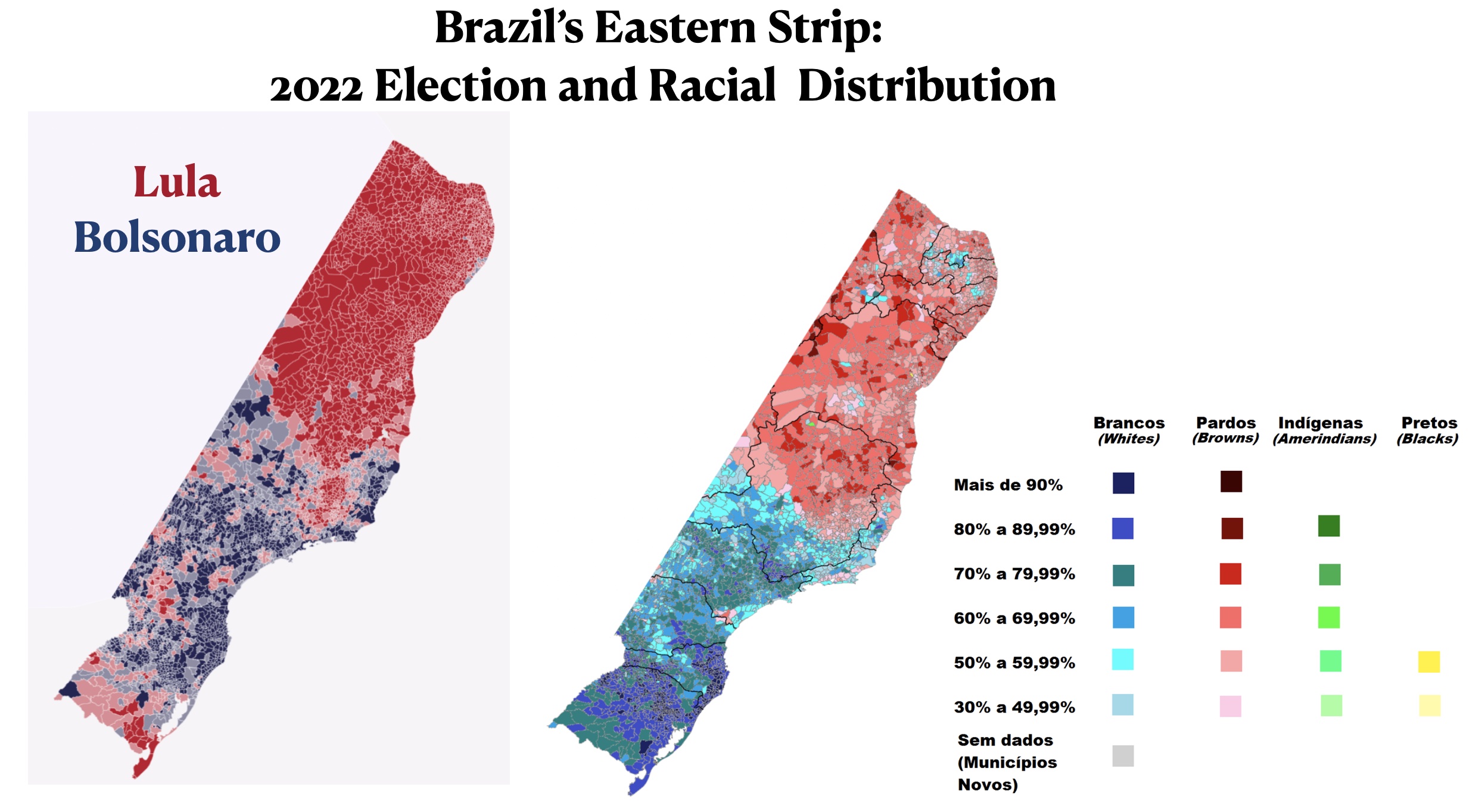 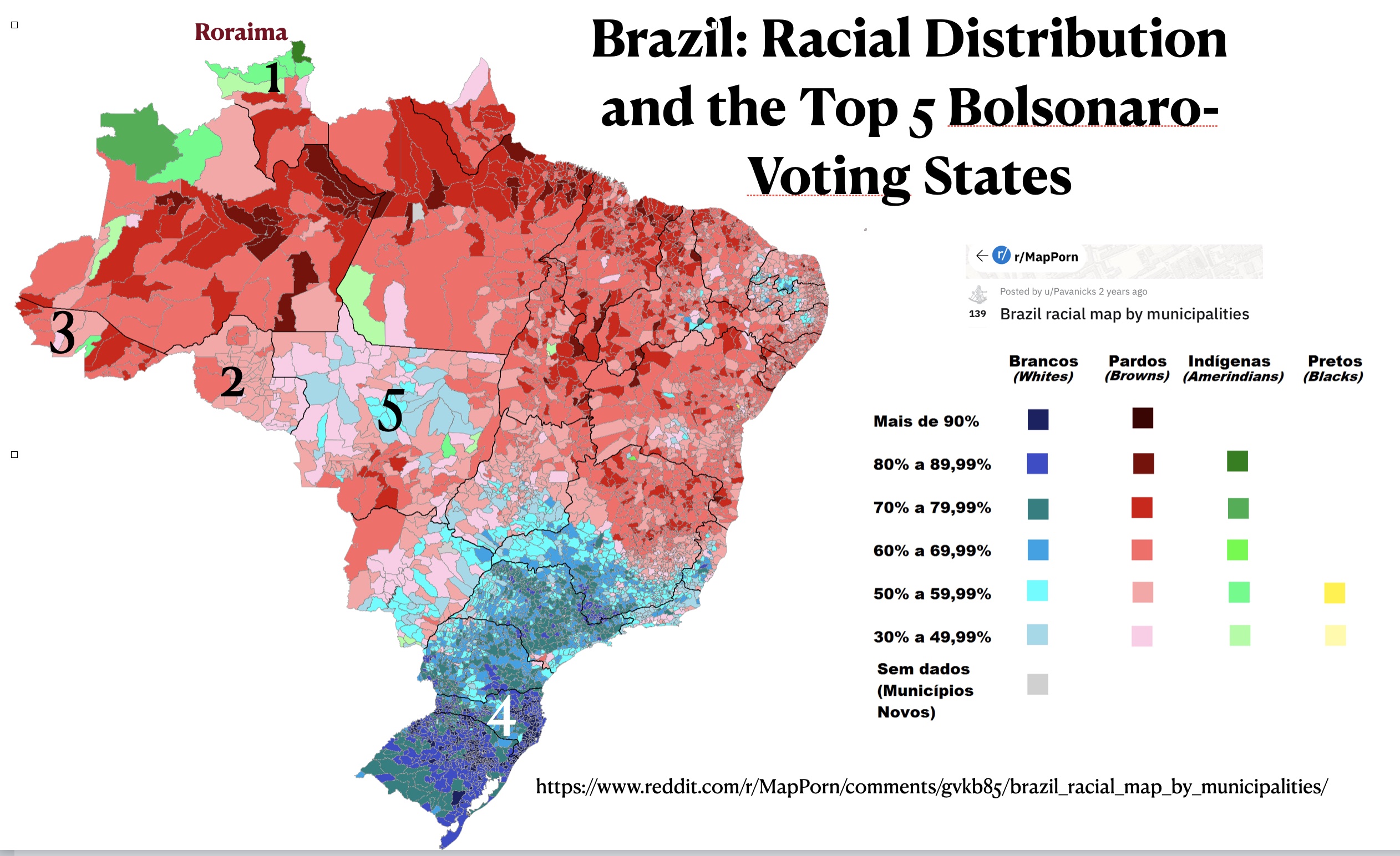 Before digging further into the details, it is important to note that race has been conceptualized differently in Brazil and the United States. In the U.S., a person with any ancestry from sub-Saharan Africa has been conventionally regarded as Black, whereas in Brazil a person with any European ancestry has conventionally been regarded as non-Black – not as “white,” to be sure, but as pardo, or brown. Historically, Brazil encouraged interracial marriage, partly due to the racist hope that it would result in a gradual “whitening” of the population. As a result of these attitudes and practices, Brazil’s Black community is estimated as constituting only around seven percent of the country’s total population. On the detailed map of racial distribution used in this post, hardly any Brazilian municipalities are shown as having a Black plurality, let alone majority. But by the U.S. system of racial classification, the Brazilian population would be reckoned as roughly half Black, with the northeast having a clear Black majority. Brazil also lacks the heritage of overt racial discrimination that characterizes the United States. Still, people with substantial African ancestry tend to be markedly poorer and less educated than people of primarily European ancestry, and they do suffer from stigmatization. But class status can partly override race; as noted in a 2007 scholarly article, “The idea that ‘money whitens’” is a classic topic in the sociological literature on race in Brazil.”

In northeastern Brazil, the poorest part of the country, voting patterns and racial patterns show little correlation. Although the population of northeastern Brazil is mostly non-white, the region does have pockets of mainly Euro-Brazilian settlement. One prominent example is the south-central part of the state of Rio Grande do Norte. Income maps show that this region is more prosperous and has less dire poverty than the rest of the state, but is still relatively poor by southeastern Brazilian standards. It is not, however, distinguishable on the 2022 electoral map, as it voted, like neighboring non-white areas, heavily for Lula. Almost all of the districts in northeastern Brazil that supported Bolsonaro in 2022 are in the coastal area of Alagoas, a mostly pardo (or mixed race) area. Deeply entrenched patron-client relationships, in which local elites influence the voting patterns of non-elites, might explain this seemingly anomalous pattern. 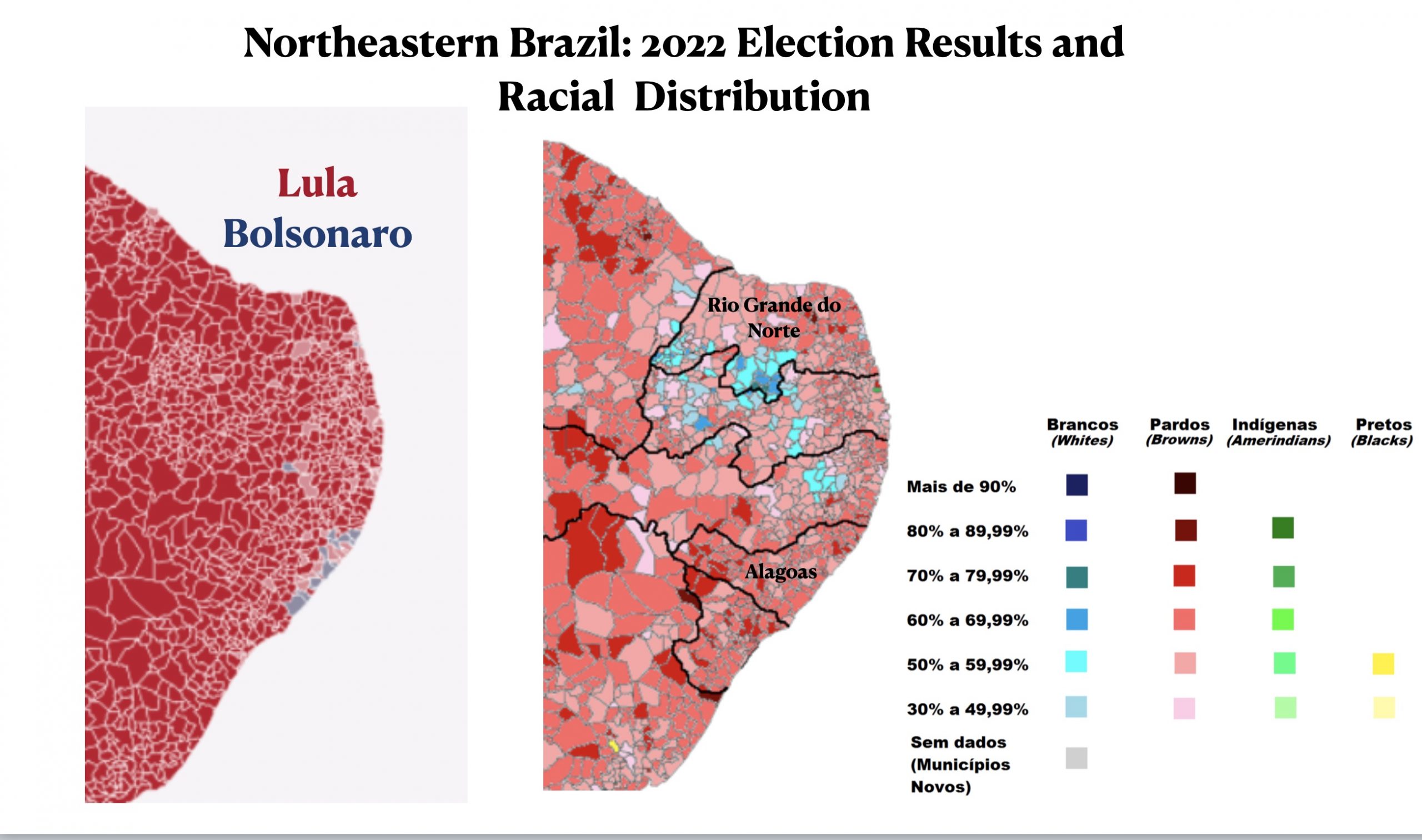 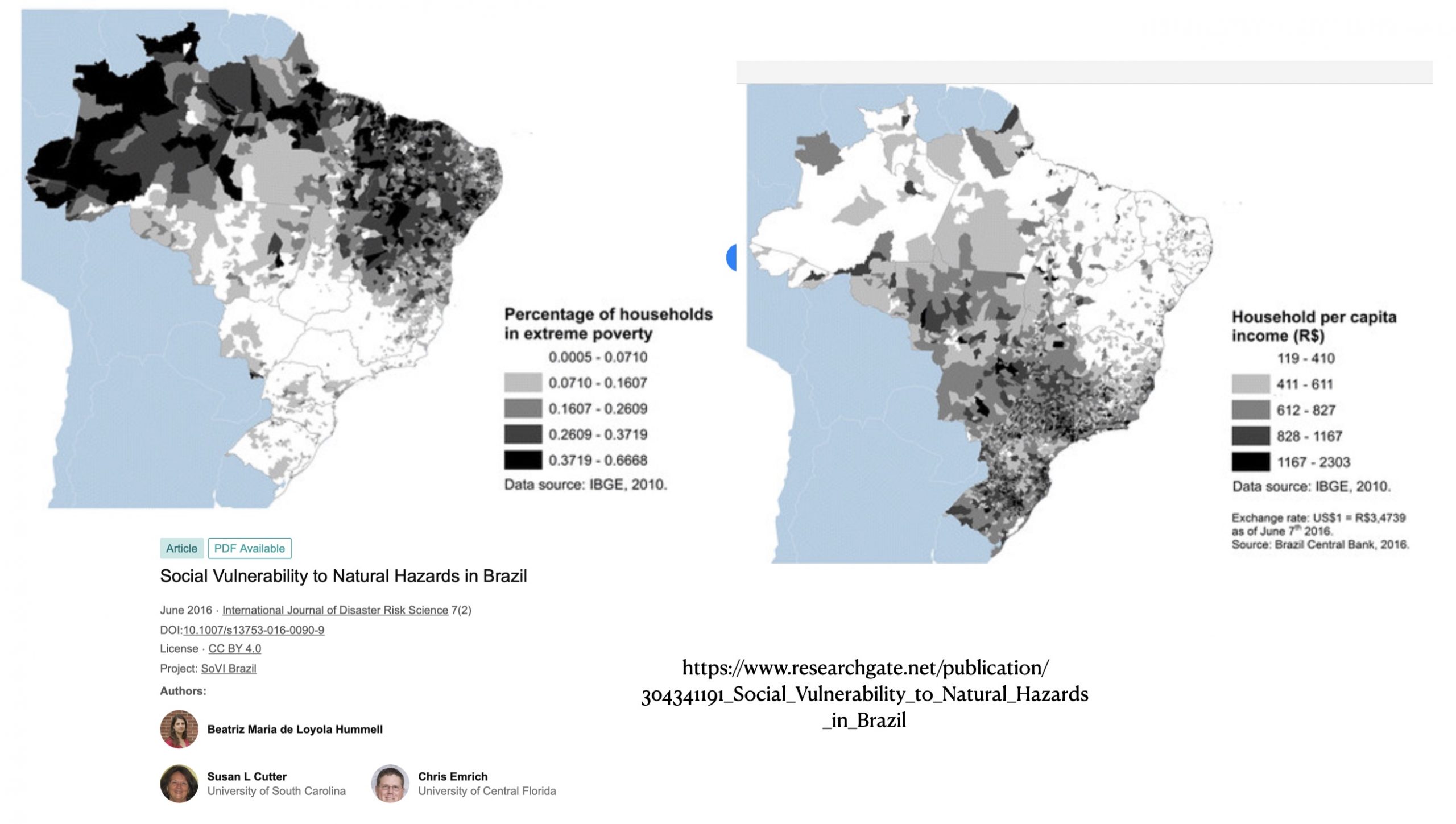 The largest number of people classified as “Black” in Brazil are found in Bahia, a large state that covers the southern half of the northeastern region. Bahia as many distinctive cultural features, which have been both celebrated and disparaged in the rest of Brazil. The final post in this GeoCurrents series on the 2022 Brazilian election will look more closely at Bahia.