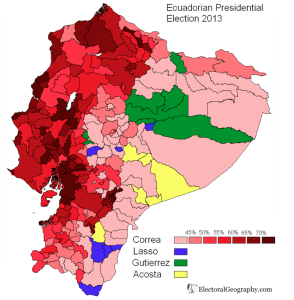 If one digs a bit deeper, however, the ethno-political situations in the two countries turn out to be quite different. To begin with, indigenous people form a clear majority in Bolivia (55 percent), but a definite minority in Ecuador (25 percent). In Ecuador, Correa gets most of his support from the Spanish-speaking majority, and is opposed by most indigenous groups, whereas in Bolivia, Morales is supported by the Andean Indio majority, but generally opposed by both the Spanish-speaking and Amazonian Indian populations. The two presidents also take different approaches to governing. Correa, who holds a PhD in economics from the University of Illinois, is a technocrat, and is poorly connected with social movements. Morales, in contrast, was the former leader of the coca-pickers union, and is closely connected with grassroots politics. 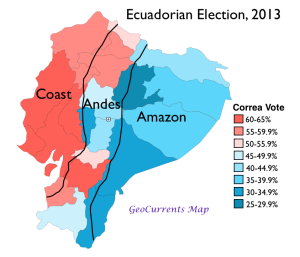 In Ecuador’s recent election, Correa’s won a mandate, easily beating his rivals. But his victory was not as overwhelming as it might seem once one considers the divisions that weakened the opposition. As can be seen on the first map, from Electoral Politics, Correa won a plurality of votes almost everywhere. What is less apparent is the fact that he won a majority of votes in less than half of Ecuador’ territory. To show this pattern, I have remapped the election data at the provincial level, distinguishing the provinces that gave Correa less than half of their votes from those than gave him a majority. On the same map, I have drawn in rough boundaries separating the Pacific coast region, the Andean region, and the Amazonian region. As can be seen, Correa is very popular in the coastal zone but relatively unpopular in Amazonia. The situation is the Andes is mixed. Here some areas supported him fairly strongly, while others favored the various candidates of the opposition.

The opposition candidates were themselves a highly mixed group, preventing the formation of a united front. Three of them took a plurality of votes in several districts:  Guillermo Lasso, of the center-right; Lucio Gutiérrez, a centrist or center-left candidate; and Alberto Acosta, a Marxist. Only Lasso, however, took a significant share of the votes nationwide. Álvaro Noboa, a right-wing populist banana magnate, took more votes than the Marxist candidate Acosta, as did Mauricio Rodas, but neither won the contest in any district, and hence they do not appear on the first map. 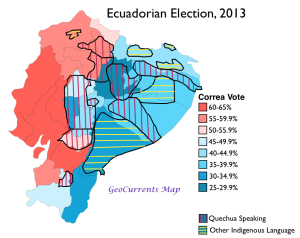 The ethnic correlations in the election are fairly clear. In general, Correa did extremely well in predominantly Spanish-speaking areas, and not so well in highly indigenous zones. To make this pattern visible, I have superimposed a map of Ecuador’s indigenous languages on the depiction of its recent election, following the Ethnologue’s linguistic mapping. As can be seen, most of the indigenous areas, both those in the highlands and those in the lowlands, favored the opposition. The Marxist candidate Acosta did particularly well among the Shuar and other Jivaroan-speaking peoples of the center-east, rainforest tribes that are relatively well organized and have experienced pronounced environmental stress. In general, however, the indigenous groups divided their votes widely among the oppositional candidates. The incumbent Correa performed most poorly in Napo (population 80,000), where he received only 25 percent of the vote. As the Wikipedia describes the province:

The thick rainforest [of Napo] is home to many natives that remain isolated by preference, descendents of those who fled the Spanish invasion in the Andes, and the Incas years before. As of 2000, the province was the sole remaining majority-indigenous province of Ecuador, with 56.3% of the province either claiming indigenous identity or speaking an indigenous language.

In the highlands proper, Correa’s worst showing was in Bolivar province, where he received roughly a third of the vote. As the Wikipedia describes Gauaranda, the provincial capital:

Since the 1990s, the indigenous majority has seized political power and most of the local elected officers are of Quechua origin. The city has 25,000 inhabitants (2005) and is growing. It suffers severe problems of electricity and water supply.

Correa’s lack of popularity with indigenous groups is usually attributed to his support for the mining and oil-extraction industries, bulwarks of the Ecuadoran economy. As Freedom House notes:

Indigenous people continue to suffer discrimination at many levels of society. In the Amazon region, indigenous groups have attempted to win a share of oil revenues and a voice in decisions on natural resources and development. The government has maintained that it will not hand indigenous groups a veto on core matters of national interest.

For a left-populist perspective on these issues, one can turn to a recent CounterPunch interview with Marc Becker, an associate professor of Latin American Studies at Truman State University. Becker characterizes Correa as a technocratic proponent of “extractivist modernization” who has little understanding or appreciation of social movements. He further argues that racial discrimination undergirds the voting patterns. As he puts it:

[M]y colleagues in Ecuador say that since Correa was elected there’s been an increase of racist incidents and racism in general.  …  The indigenous movements are so well-organized that they gain political space that exceeds their numerical representation in the country.  In Ecuador there is a certain amount of resentment by non-indigenous of indigenous for gaining political power and political space.  It appears that Correa plays the race card and plays into the latent racist attitudes of the dominant population of white and mestizo people.  You see this in Correa’s rhetoric.  He says very nasty things about indigenous people, environmentalists, and what he terms ‘ultra-leftists’. 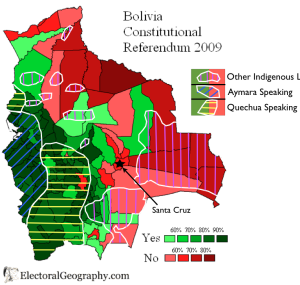 In Bolivia, in contrast, the presidency is held by an indigenous person, Evo Morales, a member of the Aymara group. His main base of support comes from the Andean Indio communities. To show this pattern, I have superimposed a map of Bolivia’s indigenous language groups (again following the Ethnologue) on an electoral map (on this map, a “yes” vote on the Constitutional Referendum of 2009 indicates support for Morales). As can be seen, Morales is not popular in the Spanish-speaking lowland economic hub around Santa Cruz. Nor does he receive much support from the Amazonian indigenous communities, several of which have protested vociferously against his road-building and resource extraction policies.

As the political left has gained power across much of Latin America, conflicts between governments and indigenous groups have not abated, and in many areas they have intensified. As Simeon Tegel put it in the telling headline of his 2011 article: Left Vs. Indigenous of Latin America: Once allies, the two have clashed over environmental concerns.