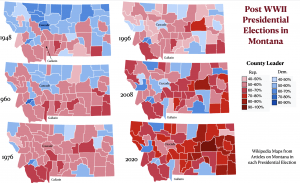 Although Montana has usually opted for Republican candidates in U.S. presidential elections, it was until recently something of a “purple” state, often dividing its votes relatively evenly between the two main political parties. As can be seen in the map series on the left, it has been trending in a decidedly red direction. In 2008, Barack Obama received 47 percent of Montana’s votes; in 2016, Hillary Clinton got only 35.7 percent.

As can be seen on these maps, Montana’s patterns of electoral geography have changed as well. The first two maps (1948 and 1960) show a north/south divide, with the south favoring Republicans and the north favoring Democrats. Many counties, however, were almost evenly split, with few experiencing landslide elections. These patterns disappear in the later maps. The north/south divide is now only vaguely evident, and landslide elections are common, at least in the Republican-voting east. Several counties have switched their party alignment. Cascade (Great 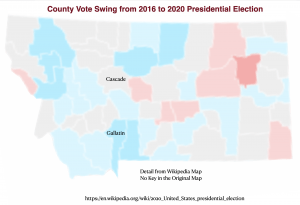 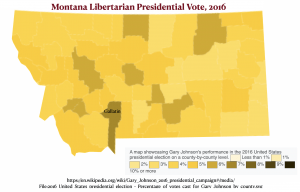 voted Republican. It is now reliable blue – and getting bluer. It remains, however, Montana’s most libertarian county. 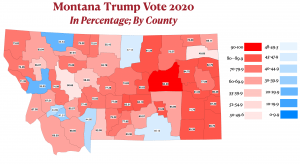 County-level maps of the Trump and Biden vote in 2020 reveal some interesting but subtle patterns. At the crudest level, the state’s main geographical divide now separates the east from the west. Although most western counties are still solidly red, several of the more populous ones are blue. Equally notable, no western county gave more than three-quarters of its votes to Trump. The statistical website 538 thus maps Montana’s western congressional district as leaning Republican, in contrast its solidly Republican eastern district. Twelve eastern counties gave more than 80 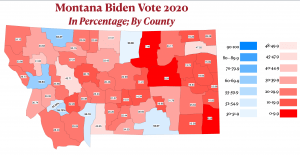 percent of their votes to Trump. But Biden did win 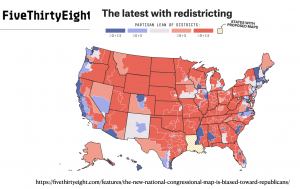 two eastern counties and came very close in a third. As we shall see in tomorrow’s post, all three of these counties have Native American majorities. 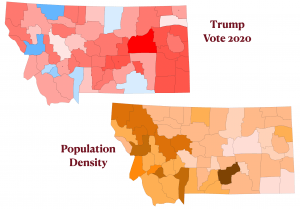 The main electoral geographical divide in the United States now pits metropolitan areas against small towns and rural areas. This pattern, however, is only vaguely apparent in Montana’s county-level data. As can be seen in the paired maps, the most sparsely settled counties gave the highest percentage of their votes to Trump, and several relatively densely populated western counties supported Biden. But Montana’s population leader, Yellowstone County (Billings), solidly backed Trump, and several rural counties that are demographically dominated by Native Americans voted for Biden. 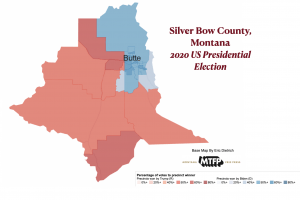 Montana’s rural/urban divide is more clearly evident at the precinct level. Consider Silver Bow County, which is politically consolidated with the city of Butte. Historically, Silver Bow was Montana’s bluest county, its many miners consistently supporting Democratic candidates. Today, the mines are largely shuttered, and the city now specializes in reclaiming toxic sites. It is still blue, although not to the extent that it formerly was. As can be seen, central Butte remains dark blue, whereas most of the 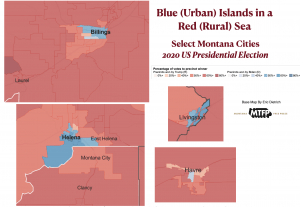 outlying areas of Silver Bow County are red. The electoral maps of Billings, Helena, and Livingston all show blue urban cores surrounded by red rural hinterlands. Even the small town of Havre on the Great Plains, population 9,362, had one light blue precinct in 2020. On the other side of the ledger, two of 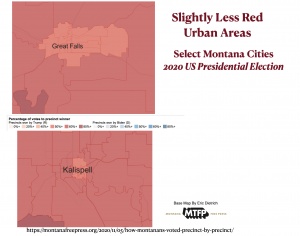 Montana’s largest cities, Great Falls and Kalispell, had no blue precincts in 2020. But they are not as red as their surrounding areas. 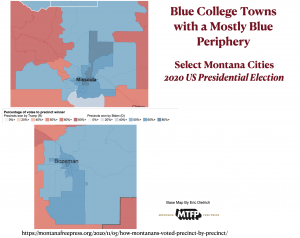 A few rural areas and small towns in Montana that are not on native American reservations now habitually vote for Democratic candidates. The college towns of Bozeman and Missoula are both surrounded by rural blue precincts, although they are not as blue as those in the urban cores. Several remote towns and rural areas situated in areas with abundant natural amenities are distinctly 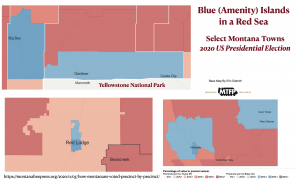 blue. Big Sky, noted for its luxury ski resort, falls into this category, as do the small towns of Gardiner and Cooke City, adjacent to Yellowstone National Park. Red Lodge, also near Yellowstone and adjacent to the spectacular Beartooth Highway, falls into the same category. Near Glacier National Park one finds the small blue towns of West Glacier and Whitefish. Nearby Columbia Falls, however, is decidedly red. This difference reflects demographic sorting tendencies: Whitefish became an early center of outdoor recreation and environmentalism, which in turn attracted newcomers with similar interests and values. As Bill Bishop argued in The Big Sort more than a decade ago, Americans are increasingly moving to places that that match their political orientations. 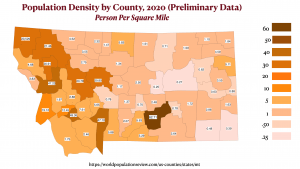