(Note: The next several GeoCurrents posts will examine the 2014 U.S. Midterm Elections) 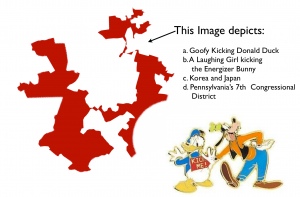 In my large lecture course on the History and Geography of Current Global Events, I always begin by showing an enigmatic or amusing map with the labels removed. I then ask the class what it represents. Recent examples include a map of the range of fruit bats (for a lecture on Ebola) and cartogram of Brazil 2010 election (for a lecture on Brazil’s 2014 election). Next Tuesday’s lecture will begin with the image posted to the left. The answer this time is obvious, provided in the form of 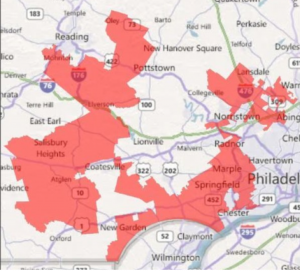 a one-question quiz: “d. Pennsylvania’s 7th Congressional District.” The other possible answers derive from a contest run by the Washington Post to name the oddly shaped districts. The winner was “Goofy Kicking Donald Duck,” while the other choices on my quiz were among the contest’s “honorable mentions.”

Pennsylvania’s 7th is by no means the only severely gerrymandered congressional district in the United States. A fascinating Wonkblog post by Christopher Ingraham from May 15, 2014 aptly describes a number of these districts as “crimes against geography.” Ingraham nicely 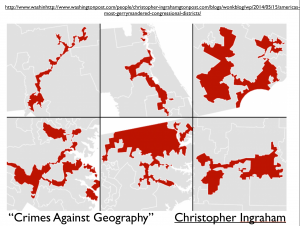 explains the rationale and mechanics of the process. As he notes:

Contrary to one popular misconception about the practice, the point of gerrymandering isn’t to draw yourself a collection of overwhelmingly safe seats. Rather, it’s to give your opponents a small number of safe seats, while drawing yourself a larger number of seats that are not quite as safe, but that you can expect to win comfortably.

Ingraham also shows that a majority of the heavily gerrymandered districts were drawn by Republicans eager to enhance their own electoral advantages. But he also demonstrates that that process is encountered on both side of the political divide. As he goes on to write:

Maryland and North Carolina are home to some of the ugliest districts in the nation among states with at least three Congressional districts. In fact, North Carolina is home to three out of the top 10 most-gerrymandered districts in the country. Maryland is proof that gerrymandering isn’t just a Republican pastime, as the state’s Democrats redrew those boundaries in 2012. The standout in that state is the 3rd Congressional district, which is the nation’s second-most gerrymandered and home to Democratic congressman John Sarbanes. 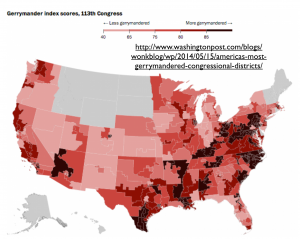 Ingraham’s most significant contribution is his measuring and mapping of the extent of gerrymandering, a feat that has been previously performed (see here and here), but probably not quite so successfully. As his map shows, some states are far more gerrymandered than others. The least manipulated congressional districts are found in both Republican states (Indiana, Kansas) and Democratic ones (New Mexico), as well as in swing states (Iowa). As Ingraham further notes, “Gerrymandering is easier to get away with in more densely-populated areas,” most of which lean in the direction of the Democratic Party. (States depicted in gray have only one congressional district, and hence cannot be gerrymandered.)

Only a few of the most egregiously gerrymandered districts stand out on the map of the 2014 midterm election. They are difficult to see in part because the map is so dominated by red, reflecting in part Republican success in recent elections and in part the pronounced clustering of Democratic 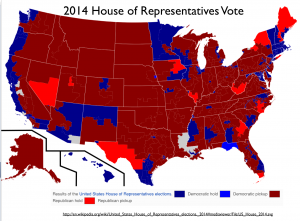 voters in densely populated urban and inner suburban areas. But in North Carolina, which has 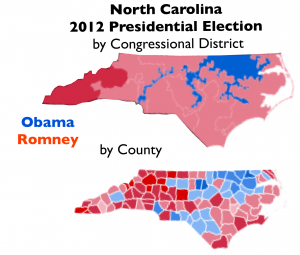 recently become a crucial “purple” state hotly contested by the two major parties, the effects of gerrymandering are clearly evident. To illustrate this, I have juxtaposed a map of North Carolina’s vote in the 2012 Presidential Election organized by congressional districts with a map based on the same data but organized by counties. The difference is striking.

Ingraham contends that North Carolina’s 12 Congressional District is the country’s most severely gerrymandered. Yet it is evidently not as aberrant in shape as it once was. As noted in the Wikipedia:

It was drawn in 1992 as one of two black majority (minority-majority) districts, designed to give blacks (who comprised 22% of the state’s population at the time) the chance to elect a representative of their choice. In its original configuration, it was a 64 percent black-majority district stretching from Gastonia to Durham. It was very long and so thin at some points that it was no wider than a highway lane, as it followed Interstate 85 almost exactly.

It was criticized as a racially gerrymandered district. For instance, the Wall Street Journal called the district “political pornography.” The United States Supreme Court ruled in Shaw v. Reno, 509 U.S. 630 (1993) that a racial gerrymander may, in some circumstances, violate the Equal Protection Clause. The state legislature had defended the two districts as based on demographics, with the 12th representing the interior Piedmont area and the 1st the Coastal Plain. Subsequently, the district was redrawn several times and was adjudicated in the Supreme Court on two additional occasions. The version created after the 2000 census was approved by the US Supreme Court in Hunt v. Cromartie. The current version dates from the 2010 census; like the 2003-2013 version, it has a small plurality of whites, though blacks make up a large majority of registered voters. In all of its configurations, it has been a Democratic stronghold dominated by black voters in Charlotte and the Piedmont Triad.