Economic and Class Factors in the 2022 Italian Election

Historically, leftwing political parties and movements have championed the working class and, in turn, have received its support. But as cultural and social issues have increased in importance, this connection has weakened and now seems to be disappearing. In Europe, concerns about immigration and European integration have also pushed working-class voters from the political left to the right. 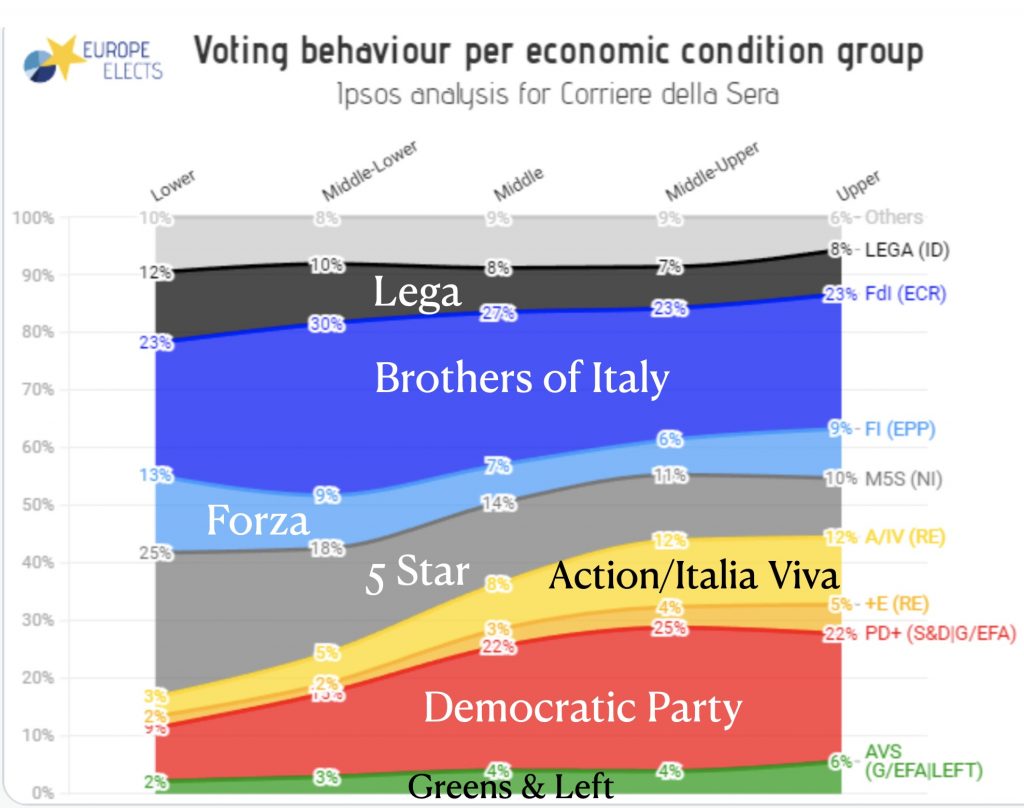 Such dynamics were clearly evident in the 2022 Italian election. As the graph posted above shows, the most left-leaning of the major Italian parties, the Greens and Left Alliance, found the bulk of its support in the higher income quintiles. The Democratic Party, the heart of the left coalition, did poorly with lower-income voters. Higher-income voters were much more inclined than low-income voters to support the pro-EU, centrist “Action/Viva Italia” alliance. The one left-leaning party to gain most of its support from the working class was the neo-populist Five Star Movement. But while the Five Star Movement supports economic redistribution and many other leftist policies, it is also hostile to immigration and suspicious of the European Union. As a result, it has sometimes been shunned by the other left-leaning parties.

Parties belonging to the victorious rightwing coalition received a significant amount of support from the working class. Giorgia Meloni’s right-populist (or national conservative, sometimes deemed post-fascist) Brothers of Italy did well across the income spectrum but appealed most strongly to those in the lower-middle income quintile. Surprisingly, Silvio Berlusconi’s Forza, an establishment oriented, pro-business party, did best among those in the lowest quintile. Matteo Salvini’s populist and regionalist/federalist Lega party also had slightly higher support among lower-income voters. 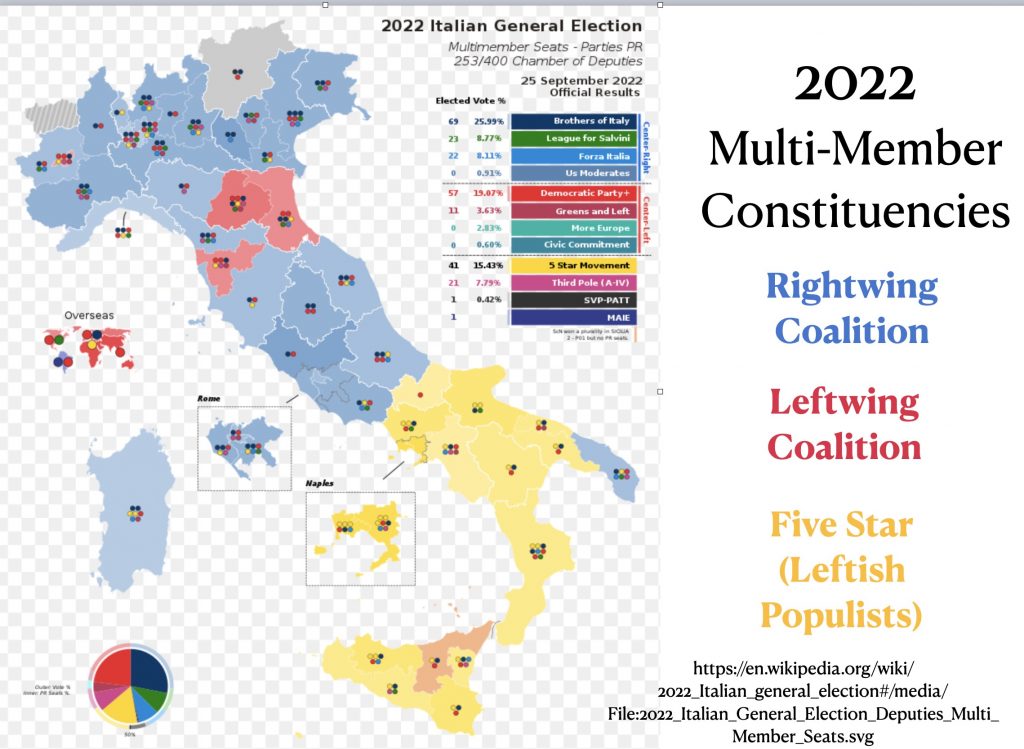 Patterns of economic geography are less visible in the Italian election returns of 2022. As can be seen on the map of multi-member electoral constituencies posted above, the left-populist Five Star Movement received most of its support in the south, which is by far the poorest part of Italy. In northern Italy, however, no economic correlations are apparent. The three richest provinces of Italy, as assessed by per capita GDP in 2019 (see the map posted below), supported different parties. Bologna gave most its votes to the leftwing coalition, as it always does. Monza and Brianza, just north of Milan, supported the rightwing coalition, as it generally does. In the far north, the Autonomous Province of Bolzano (or South Tyrol) supported its own regionalist party, as it almost always does. South Tyrol is very distinctive from the rest of Italy, mostly because more than half of its people speak German as their first language. 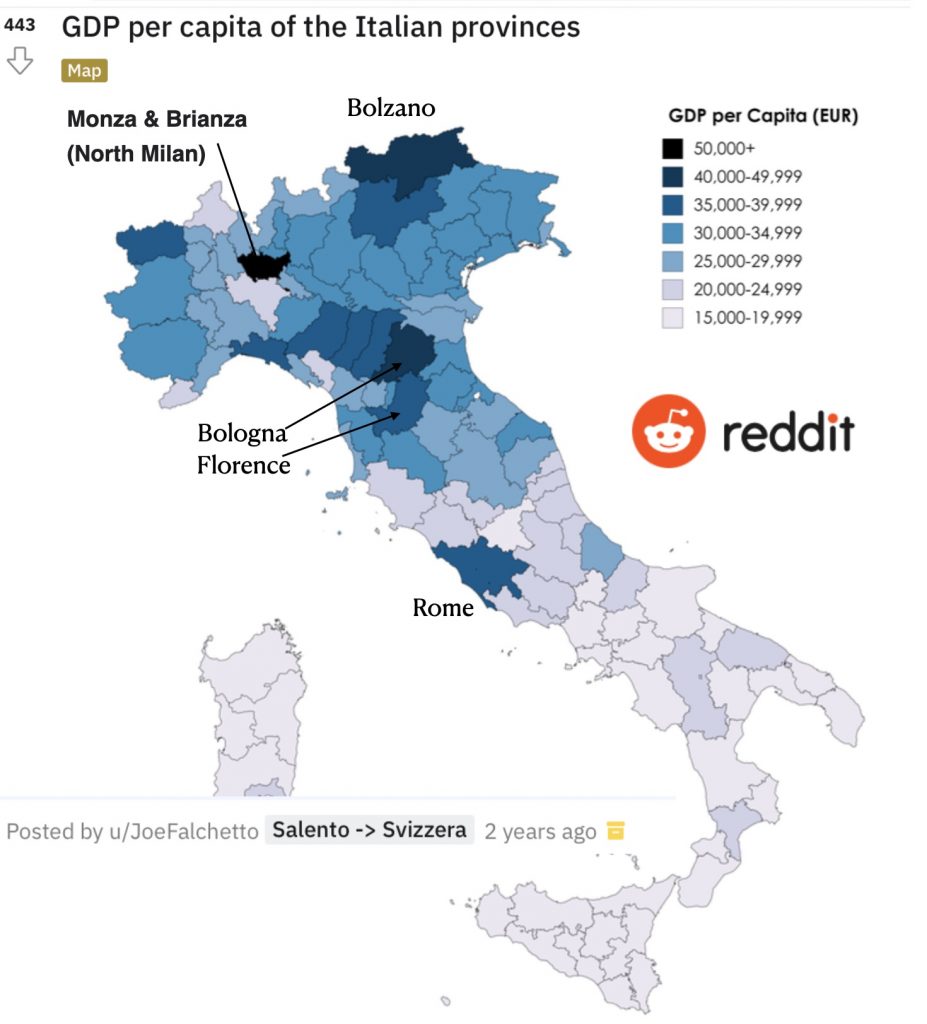