The 2022 midterm elections in the United States had mixed results for cannabis legalization. Voters in Maryland and Missouri approved legalization measures, easily in the first case and by a relatively narrow margin in the second (see the charts below). Missouri thus became the third solidly “red state” to allow cannabis consumption without a medical recommendation, following Alaska and Montana. Voters in Arkansas and South Dakota, however, rejected legalization, with a 56% “no” vote in the former state and a 55% “no” vote in the latter. The South Dakota vote took many by surprise, as just two years earlier a legalization referendum passed, which was later invalidated in court. South Dakota voters will again take on the issue in the fall of 2023, but indications for legalization are not positive. As reported by Benzinga.com, “a statewide poll conducted this summer revealed that South Dakotans’ general sentiment toward legalizing recreational marijuana has shifted over the past two years, signaling that a referendum on the issue this fall could fail.” At the federal level, meanwhile, congressional efforts to eliminate the de jure cannabis prohibition stalled out, yet again. 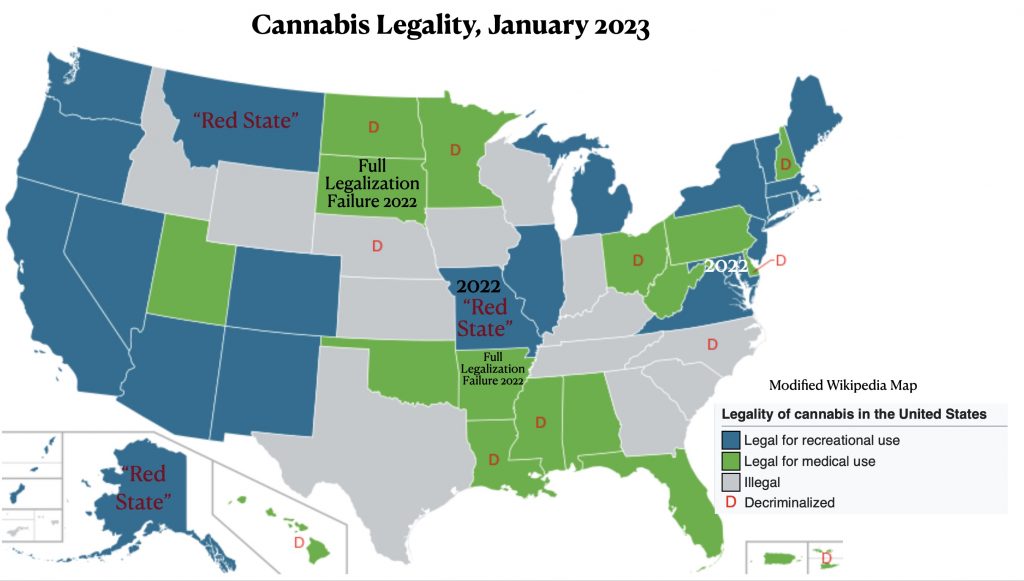 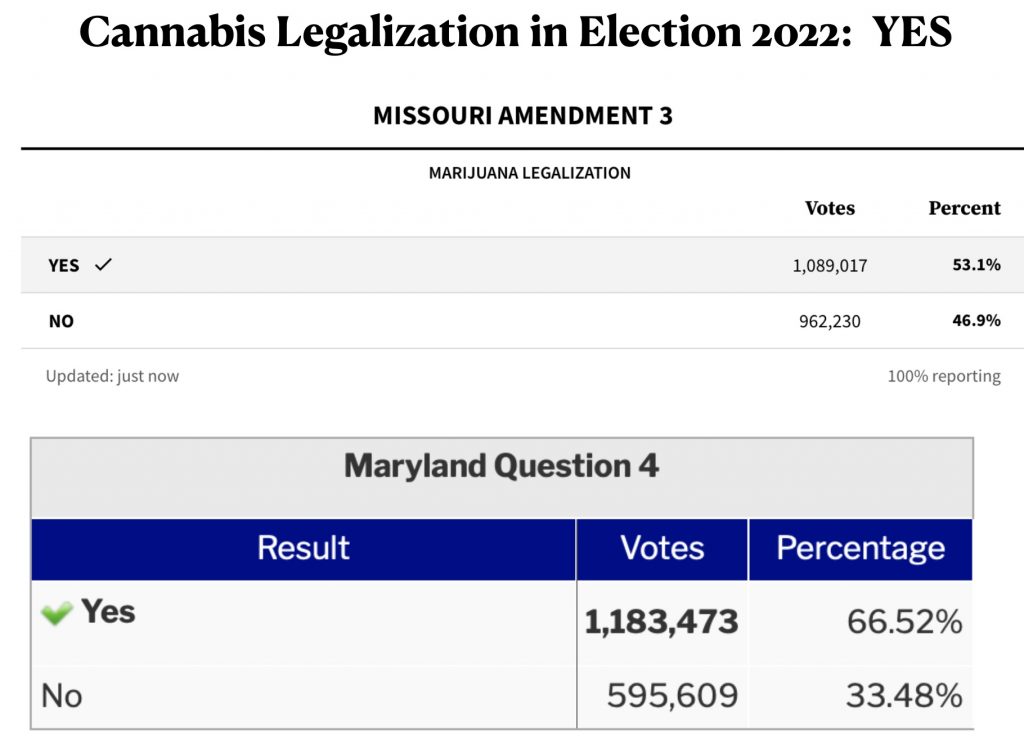 The failure of federal cannabis legalization, and in some states as well, seems to defy the general public will. Opinion polls conducted by a variety of organizations show overwhelming support. An October 2021 Gallup poll found that even 50% of Republicans favor full legalization, with Democrats and independents offering overwhelming approval (83% and 71%). Similar results have been obtained by other polling agencies. A 2022 CBS/YouGov poll found a 66% level of support for legalization at both the federal and state levels. According to this poll, Republicans overall narrowly oppose legalization (51% to 49%), but those below the age of 45 solidly support it (59%). A 2022 Pew survey found that only 10 percent of Americans think that cannabis should be illegal for all purposes. According to the same poll, Americans in every age bracket except that of the elderly (75+) favor full legalization.

Given these numbers, along with the fact that American voters are roughly evenly divided among Republicans, Democrats and independents, the persistence of federal anti-cannabis laws is difficult to explain. In this arena, seems that Congress is defying the public will. Quandaries also emerge at the state level. Even in deep blue Hawaii and Delaware, cannabis remains legal only for medical uses, and in several purplish states it remains fully illegal (Wisconsin, North Carolina, and Georgia). How can these results be squared with public opinion polls that shows overwhelming support for legalization?

A variety of factors are probably at play. Simple inertia probably plays a role, and as a result it seems likely that Hawaii and Delaware will opt for legalization before too long. More important, however, is the concerted opposition of anti-cannabis forces. A sizable minority of Americans is vehemently opposed, with many regarding marijuana as nothing less than the “devil’s weed.”* As is often the case, the desires a vehement minority can override the less passionate concerns of a substantial majority. It is significant that legalization has often occurred through popular referenda rather than through legislation, as legislators can be more easily swayed by interest groups than the voters at large.

But another factor may be involved as well. Legalization, it turns out, has often yielded discouraging or even disastrous results. With revenues much lower than expected, chaotic business environments, and a thriving black market, states like California demonstrate the potential hazards of a poorly formulated legal regime. As a result, some legislators, and many voters, may ultimately favor legalization, yet still reject whatever proposal is put before them, skeptical that it gets it right. These issues will be examined in much greater detail in later posts

*The term “devil’s weed” is used most often for Datura, or jimsonweed, which contains several powerful and poisonous psychoactive substances. For a religiously informed discussion of cannabis as the “devil’s weed,” see Marijuana – The Devil’s Weed?, by Dr. Joe Fawcett.