(Note: This post completes a brief series on Brazil’s 2014 Election. This series has benefitted tremendously from the informed and insightful comments by Frederico Freitas, Ygor Coelho Soares, and Steve. Many thanks!) 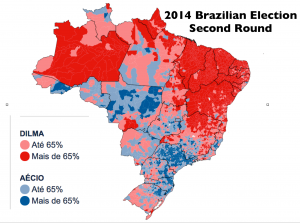 In the electoral map of Brazil’s 2014 election, the vast but relatively lightly populated state of Mato Grosso in the center-west stands out for the strong support that most of its districts gave to the defeated challenger Aécio Neves. Although the triumphant incumbent Dilma Rousseff won handily in a limited area of south-central Matto Gross, most of the rest of the state strongly favored Neves. Yet Mato Grosso does not fit the general profile of areas that rejected Rousseff in favor of Neves. It has historically been a mid-income state, much less prosperous than the core areas of Neves support in the southeast. It is also unlike southern Brazil in having a non-white majority. According to the Wikipedia: 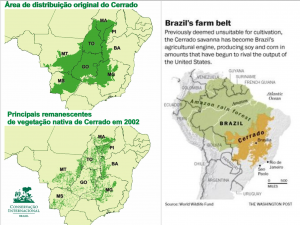 But Mato Grosso has been changing rapidly in recent years, with both its population and its economy surging ahead. The Wikipedia table of Brazilian per capita GDP by state places Mato Grosso in the eighth position, between Parana and Minas Gerais— and it is seven years out-of-date. One of the main reasons for the state’s rapid economic growth is the boom in soy farming. Only a few decades ago, most of Matto Grosso was considered almost worthless for agriculture, due to the poverty of its soils. But researchers at Empresa Brasileira de Pesquisa Agropecuária (EMBRAPA), a state-owned firm connected with the Brazilian Ministry of Agriculture, developed effective methods 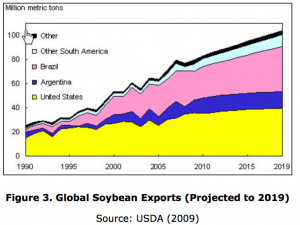 of enhancing soil fertility and bred new crop varieties adapted to local conditions. Such efforts were particularly successful in the Cerrado, Brazil’s central savannah region that covers much of southern and eastern Mato Grosso. The result has been an extraordinary agricultural surge that has allowed Brazil to 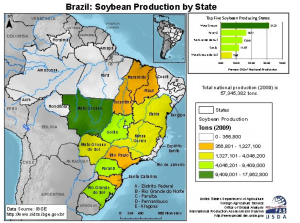 overtake the United States as the world’s top soy producer. Farming in Mato Grosso tends to be highly mechanized and chemically intensive. Many of the large-scale famers of the region hail from southern Brazil, particularly Rio Grande do Sol. 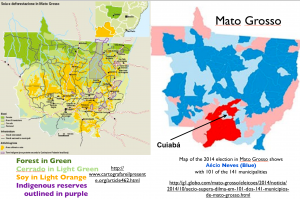 Intrigued by the possible connection between agricultural expansion and voting behavior in Mato Grosso, I juxtaposed an Italian land-use map of with a map of the recent election returns. Comparing these two maps, some degree of correlation is apparent, although it is by no means perfect. Many of the main soy-farming areas voted heavily for Neves. Support for Rousseff, on the other hand, was concentrated in the lightly populated Pantanal of the south-center (arguably the world’s largest wetland) which is used mainly for low-intensity cattle grazing along with with some eco-tourism. The main Rousseff-voting zone also wraps around the state’s urbanized core of Cuiabá and neighboring towns, although the cities themselves seem to have narrowly favored Neves. The paired maps also show the densely forested and sparsely settled northern swath of Matto Grosso as 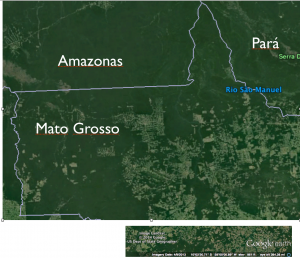 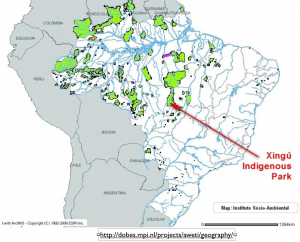 The largest contiguous zone of forest and other forms of natural vegetation in Mato Grosso is found along the upper reaches of the Xingu River and its tributaries in the northeastern portion of the state. Most of this region is protected as part of Xingu National Park, which was established in 1961 to preserve both the natural environment and the region’s indigenous peoples. At the time, this region was widely viewed as one of the most remote and under-unexplored parts of the world. When 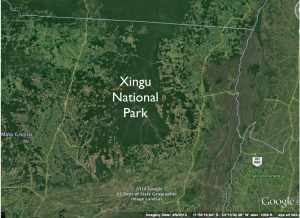 I was an adolescent, I was given a book entitled Mato Grosso, Last Virgin Land. I found it enthralling, and the name “Mato Grosso” came to signify in my mind both the forest primeval and the most inaccessible place on Earth. Today, the upper Xingu no longer seems so remote. Not surprisingly, the park and the larger river system now face a number of threats.

According to a recent report from the Environmental Defense Fund, Brazil made major progress in preserving wild lands and indigenous peoples under the governments of Fernando Henrique Cardoso (1995-2003) and Luiz Inácio Lula da Silva (2003-2010), but relatively little under that of Dilma Rousseff (2010-). The report also credits most of the gains under Lula da Silva to his former environmental minister, Marina Silva. For a while, Marina Silva looked like she might have a chance to win the presidency this year, but she was soundly defeated in the first round of the election.