The 2018 and 2022 Brazilian general elections shared some important features with the 2016 and 2020 U.S. presidential elections. In all cases, a rightwing, populist nationalist won the first contest (Jair Bolsonaro and Donald Trump respectively) but lost the second, in both instances to an older, politically well established, center-left opponent (Lula [Luiz Inácio Lula da Silva] and Joseph Biden respectively). But the electoral geographies of the two countries are highly divergent. In the United States, and in much of Europe, parties on the political left now find most of their support in areas of high population density, whereas those of the right find most of their support in areas of low population density. Michael Lind, a hard-to-classify political centrist, has analyzed this new electoral pattern in some detail. As he writes:

On a map of the United States color-coded by party, big cities and university towns and a few regions with large immigrant and racial minority populations are a chain of Democratic islands in a Republican ocean. Similar patterns appear on maps of voting for Brexit in the UK and elections in continental Europe.

Looking at these maps, it is easy to see why scholars and journalists refer to the “urban-rural divide.” But this is misleading. Farm owners and farmworkers make up only a tiny sliver of the population in the typical Western democracy. Most voters in Europe and North America today live in broadly defined metro areas or small communities on their periphery. In the case of partisanship, the most important border is not between city and countryside, but between expensive, high-density urban business districts and inner suburbs on the one hand and, on the other, low-density suburbs and exurbs.

Rather than use the terms “city” and “countryside,” we can describe the high-density areas as “hubs” and the low-density areas around and between the hubs as “heartlands.”

In Brazil, a highly urbanized country, such a density divide is barely visible. As noted in The Guardian:

Lula’s victory had a peculiarity: he won many votes in some of Brazil’s most populated municipalities but also in most of the sparsely populated areas. In the latter, he reached more than 80% of the vote. It was at these two ends that he made the difference. Bolsonaro, instead, did very well in medium-size cities, as shown by the concentration of blue bubbles in the graph below in districts with between 100,000 and 1 million inhabitants.

But as The Guardian’s chart shows, Bolsonaro triumphed in more than half of Brazilian cities with populations of more than one million. As a map from the same article shows, Brazil’s “hubs” do not stand out from their “heartlands” in regard to electoral geography. A Portuguese-language graphic from Nexo shows that Bolsonaro won more than half of the capital cities of Brazil’s states. In the northeastern state of Alagoas, where Lula took 58.7 percent of the vote, Maceió, the capital city and largest urban center, went for Bolsanaro. (Note that in Brazil, as in most of the world, red is used for the political left and blue for the right.) 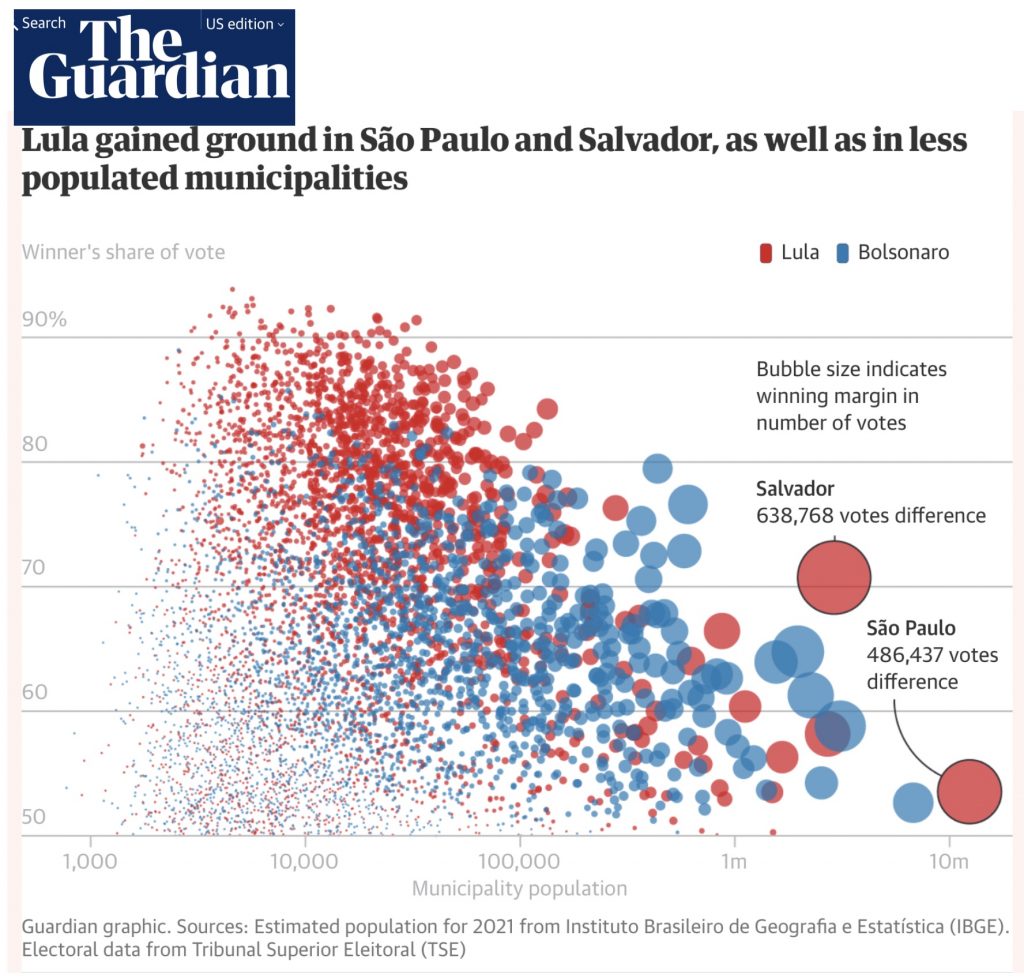 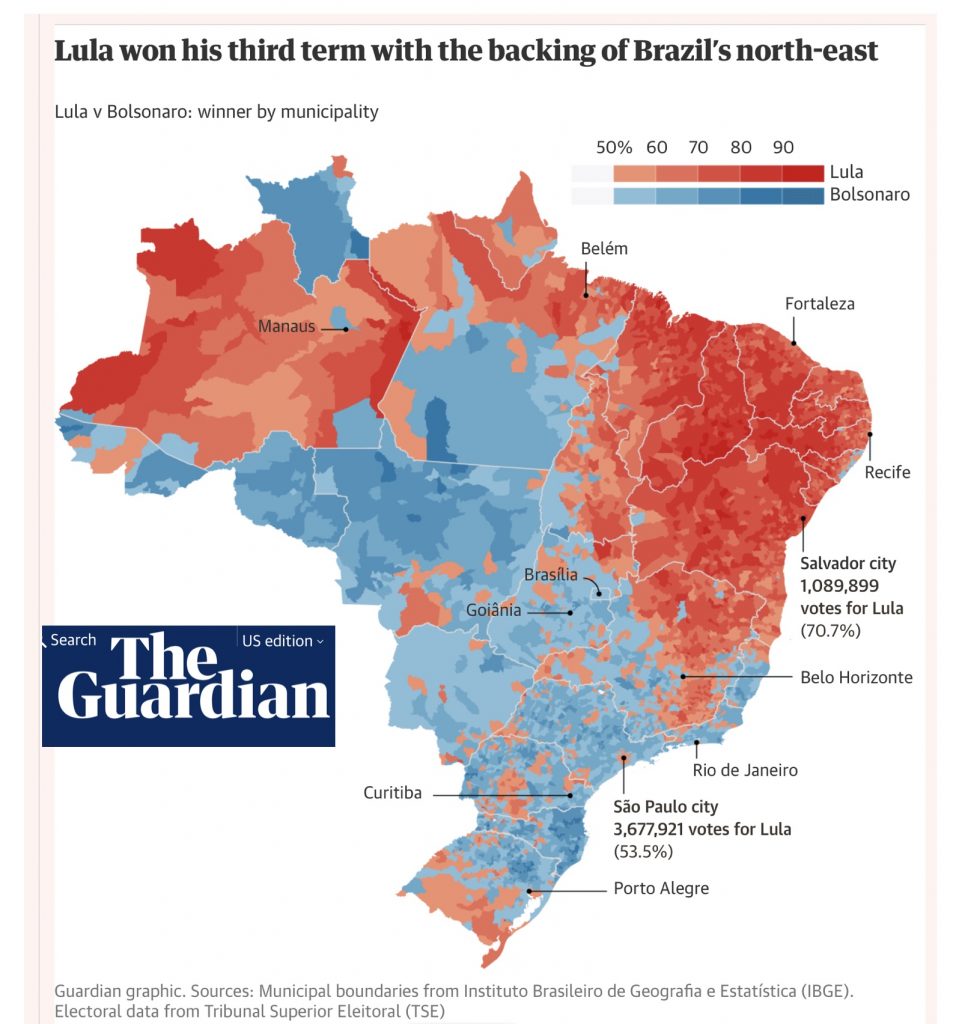 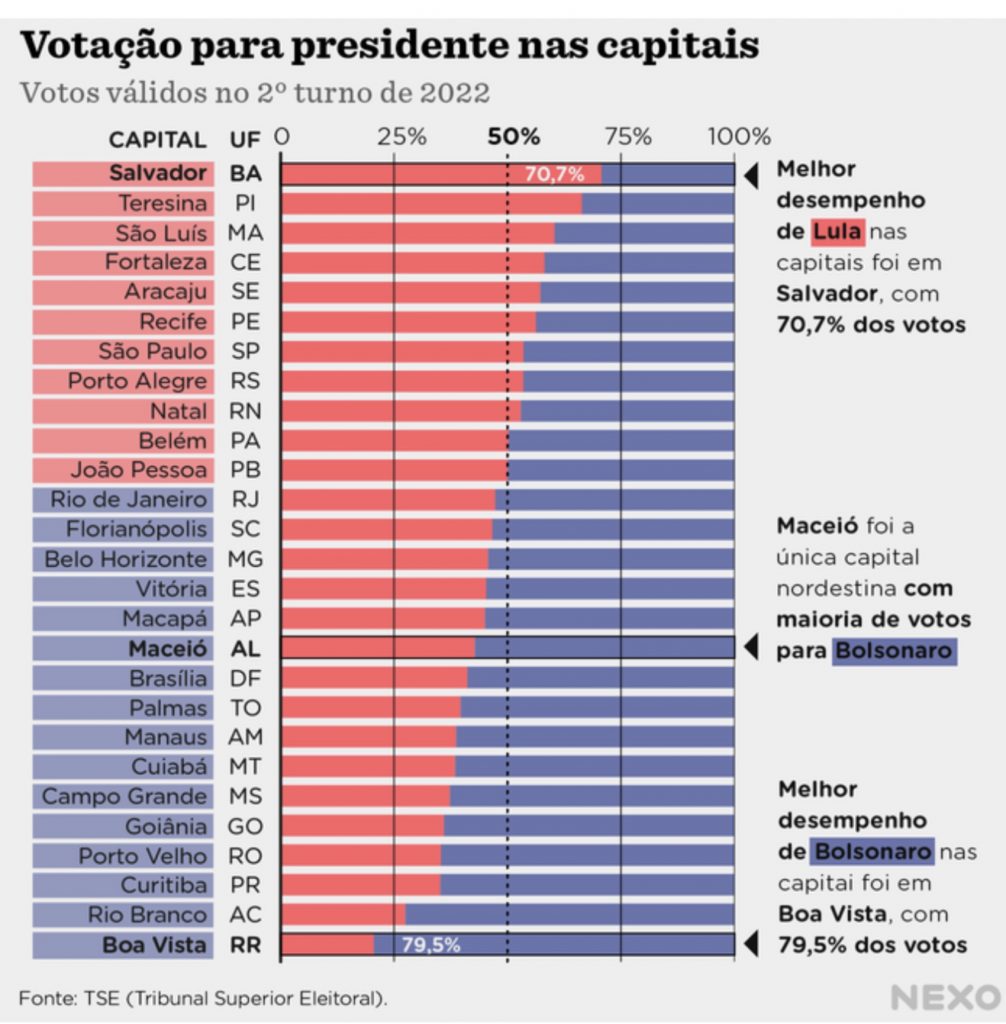 The same pattern is evident in São Paulo’s 2022 gubernatorial election, which was won by a close ally of Bolsanaro, Tarcísio Gomes de Freitas. As can be seen on the Nexo map posted below, Tarcísio (as he is mononymously called) lost São Paulo city and most of its inner suburbs while winning in most of the rest of the state. But Tarcísio did triumph in several large cities, taking both Campinas (population 1.2 million) and São José dos Campos (population 729,000; metropolitan area, 2.5 million). No U.S. cities of such a size vote for rightwing candidates. The largest to support Donald Trump in 2020 was Oklahoma City, with a population of 681,000 and a metropolitan area of 1.4 million. 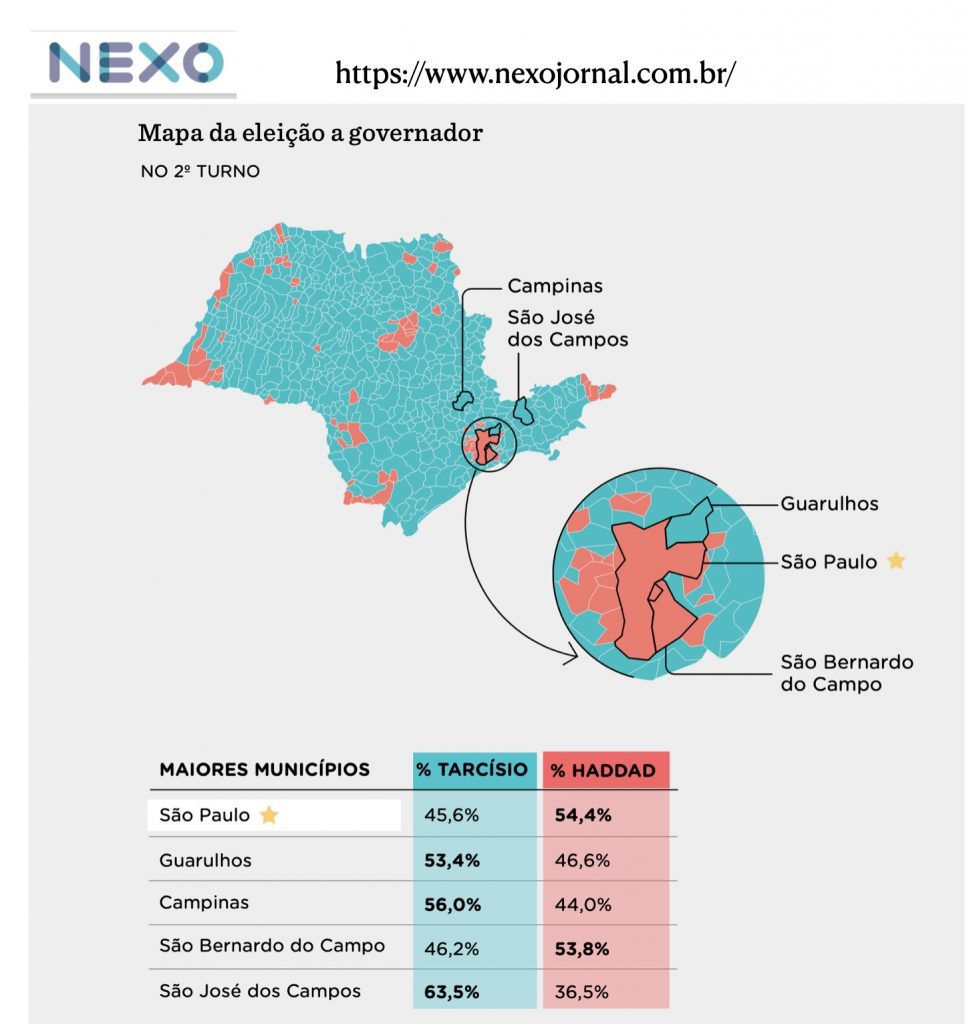