In the 2022 Brazilian presidential election, the Amazonian region was strikingly divided, as is clearly visible on the Globo map posted below. (I have added an oval and two terms on the map to mark Roraima and the Amazonian region.) Most municipalities (similar to U.S. counties) here strongly supported one candidate or the other. Bolsonaro’s zone of support lies to the south of the Amazon River, but has a distinct northern outlier in the state of Roraima. In contrast, in the large state of Amazonas in the northwest, Lula da Silva received more than 60 percent of the vote in almost every municipality. The main exception was the capital city of Manaus (population 2.2 million), where Bolsonaro took 61 percent of the vote. 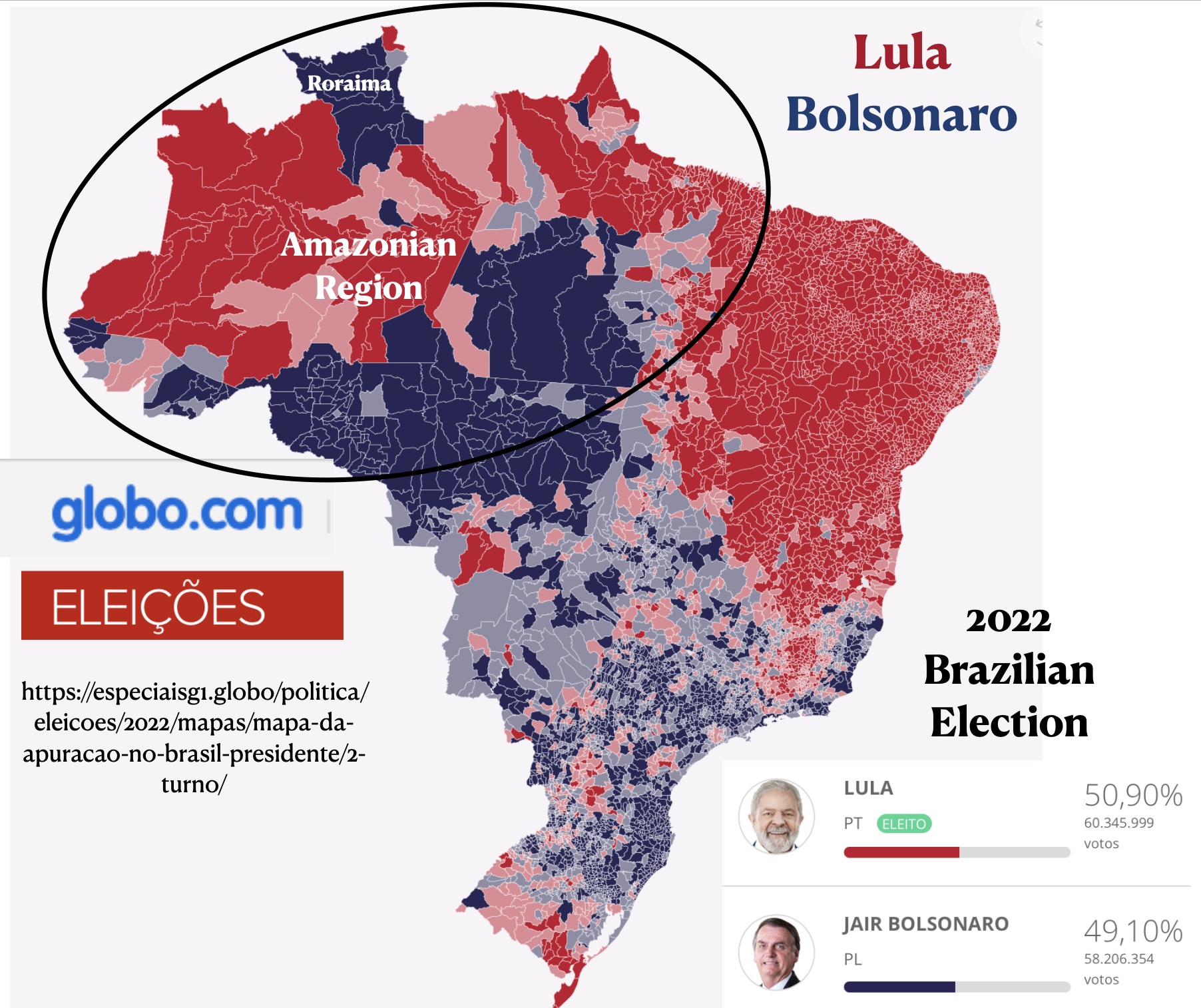 The electoral divide in the Amazonian region is easily explained by economic and demographic factors. As noted in a recent Mongabay headline, “Bolsonaro loses election but finds big support in Amazon Arc of Deforestation.” The Amazonian areas won by Bolsonaro have seen extensive forest clearance and now have economies based on agriculture, grazing, and artisanal (and often illegal) mining. As people stream into these areas from other parts of Brazil, pressure for further deforestation grows. As Bolsonaro, unlike Lula, is a champion of forest clearance and mining, his high level of support in these areas is not surprising. As noted by Mongabay writer André Schröder:

Experts don’t see the result as surprising since a large part of the population in this part of the territory doesn’t consider deforestation to be illegal. “Land invaders, loggers, ranchers and gold miners want a full license to occupy the Amazon territory. And Bolsonaro is not against that,” Beto Veríssimo, researcher and co-founder of the Brazilian conservation nonprofit Imazon, told Mongabay by phone. Voters from those municipalities benefit from politicians who promise not to fight illegal activities, according to Veríssimo. 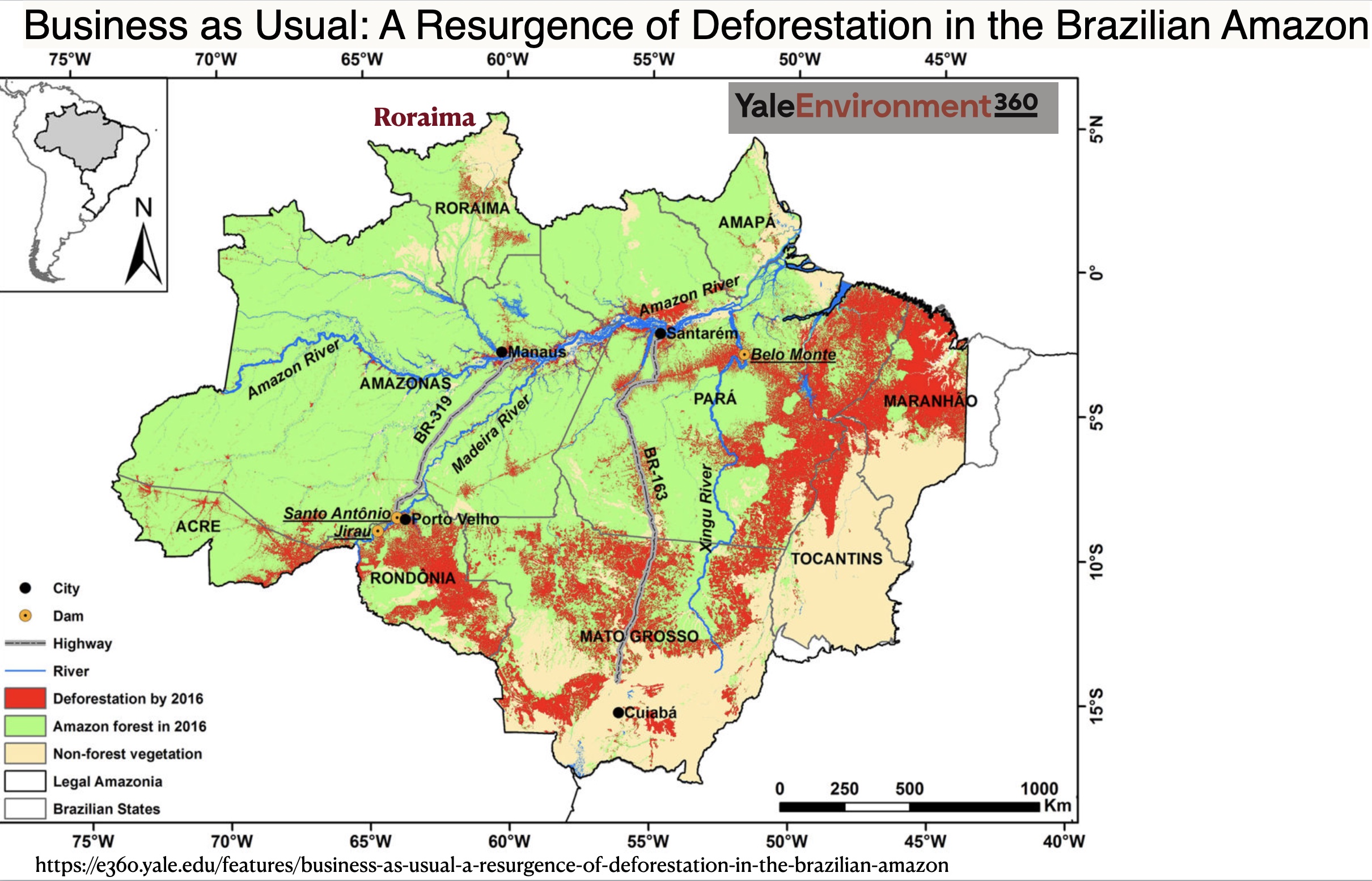 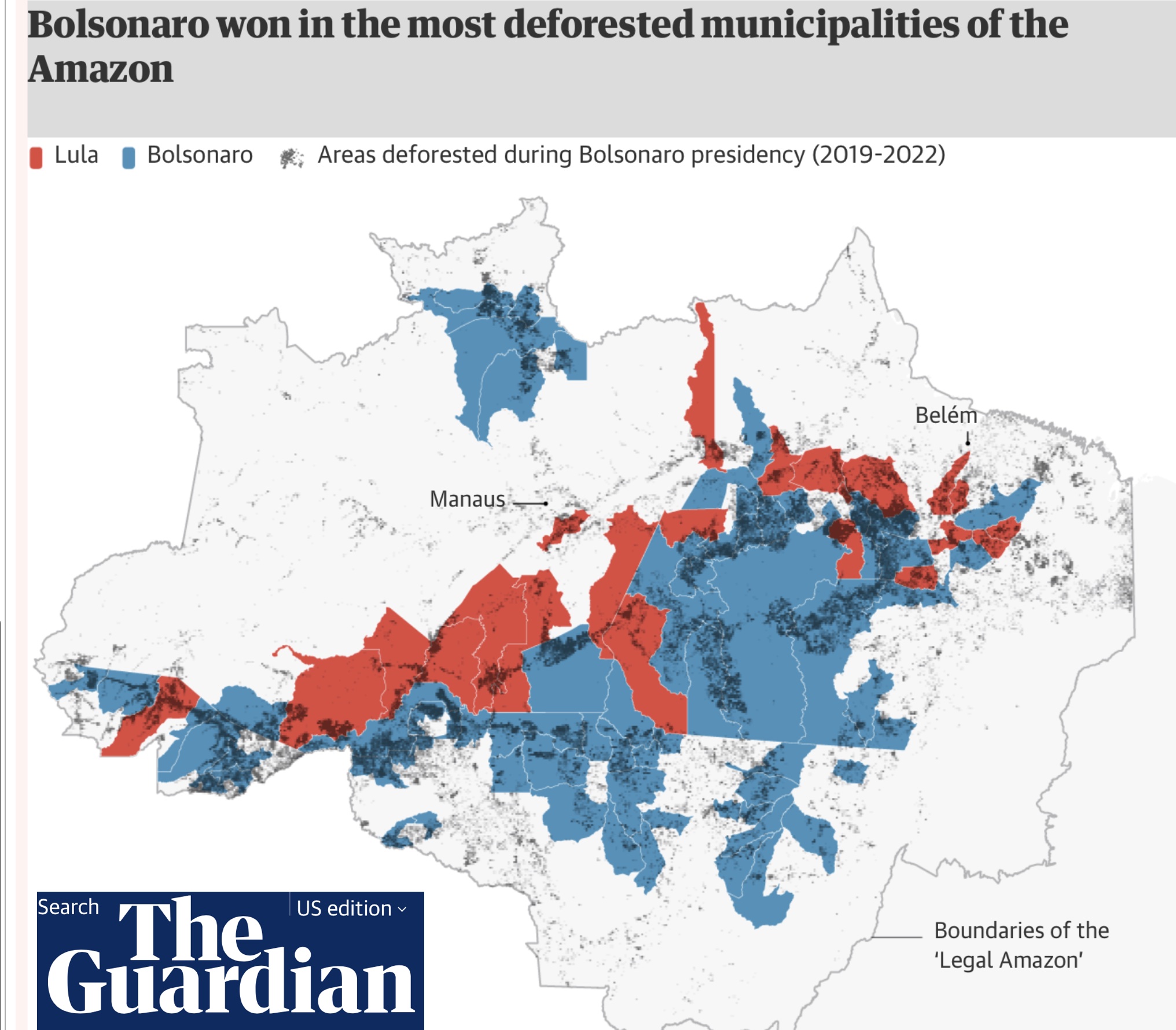 The partially deforested, Bolsonaro-voting zone of the southern Amazon is also characterized by high rates of violent crime, as can be seen on the homicide map posted below. Force is often used here to seize land and settle disputes. In such an environment, many voters support Bolsonaro’s policies that allowed widespread gun ownership. In Brazil as a whole, however, roughly two-thirds of the people oppose these measures 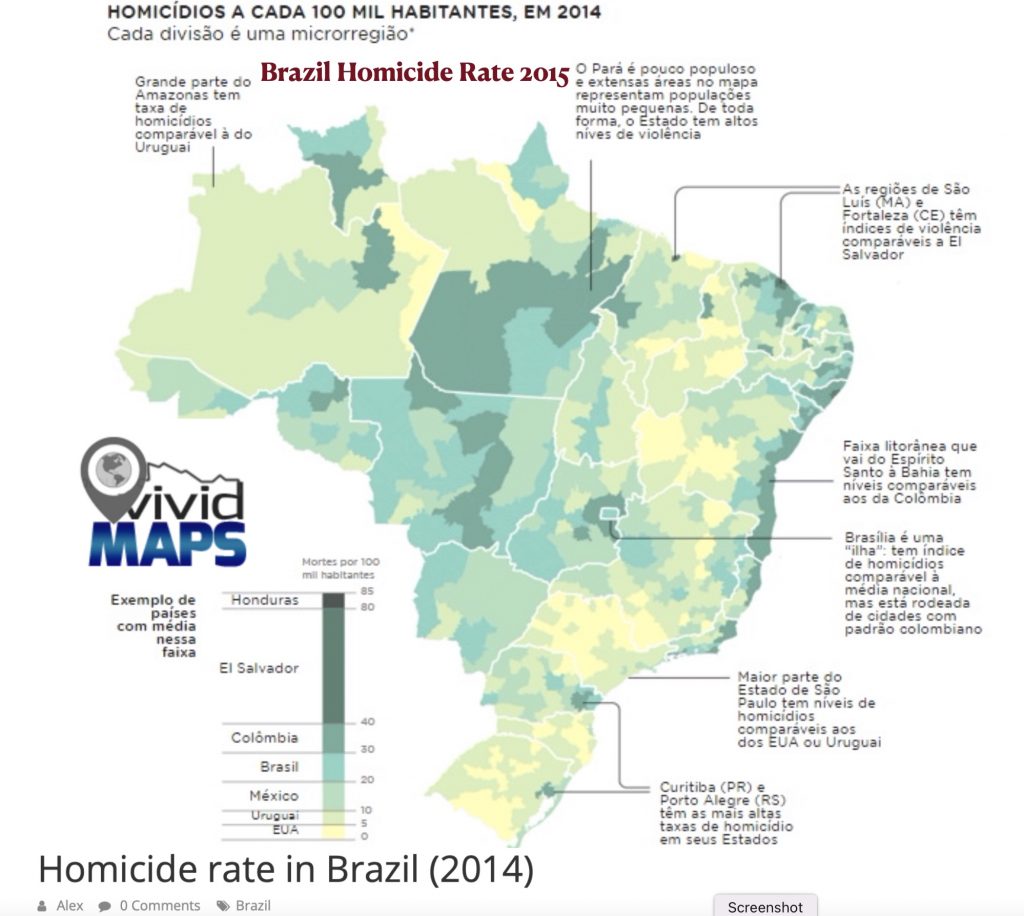 In the Amazonian heartland state of Amazonas, in contrast, relatively little deforestation has occurred. Here most rural people derive their livelihoods primarily from the natural environment and small-scale horticulture. Such areas strongly supported Lula, who significantly reduced the pace of deforestation when he was president in the early 2000s. As noted in a Guardian article, Amazonian municipalities with large number of indigenous people also voted heavily for Lula, as would be expected.

The Brazilian state that gave the highest percentage of its votes to Bolsonaro (76 percent) is Roraima, located in the northern Amazonian region on the border with Venezuela and Guyana. The natural vegetation of Roraima is a mixture of savannah and rainforest, both of which have seen extensive agricultural conversion. Illegal mining is also widespread – and environmentally destructive. Roraima, the least populated Brazilian state, has seen explosive growth in recent decades, its population rising from 79,000 in 1980 to 631,000 in 2020. As can be seen on the paired maps below, only one municipality in Roraima supported Lula in 2022; not coincidentally, it has an overwhelmingly indigenous population. But the state’s other northern municipalities also have indigenous majorities or pluralities, yet they voted for Bolsonaro. 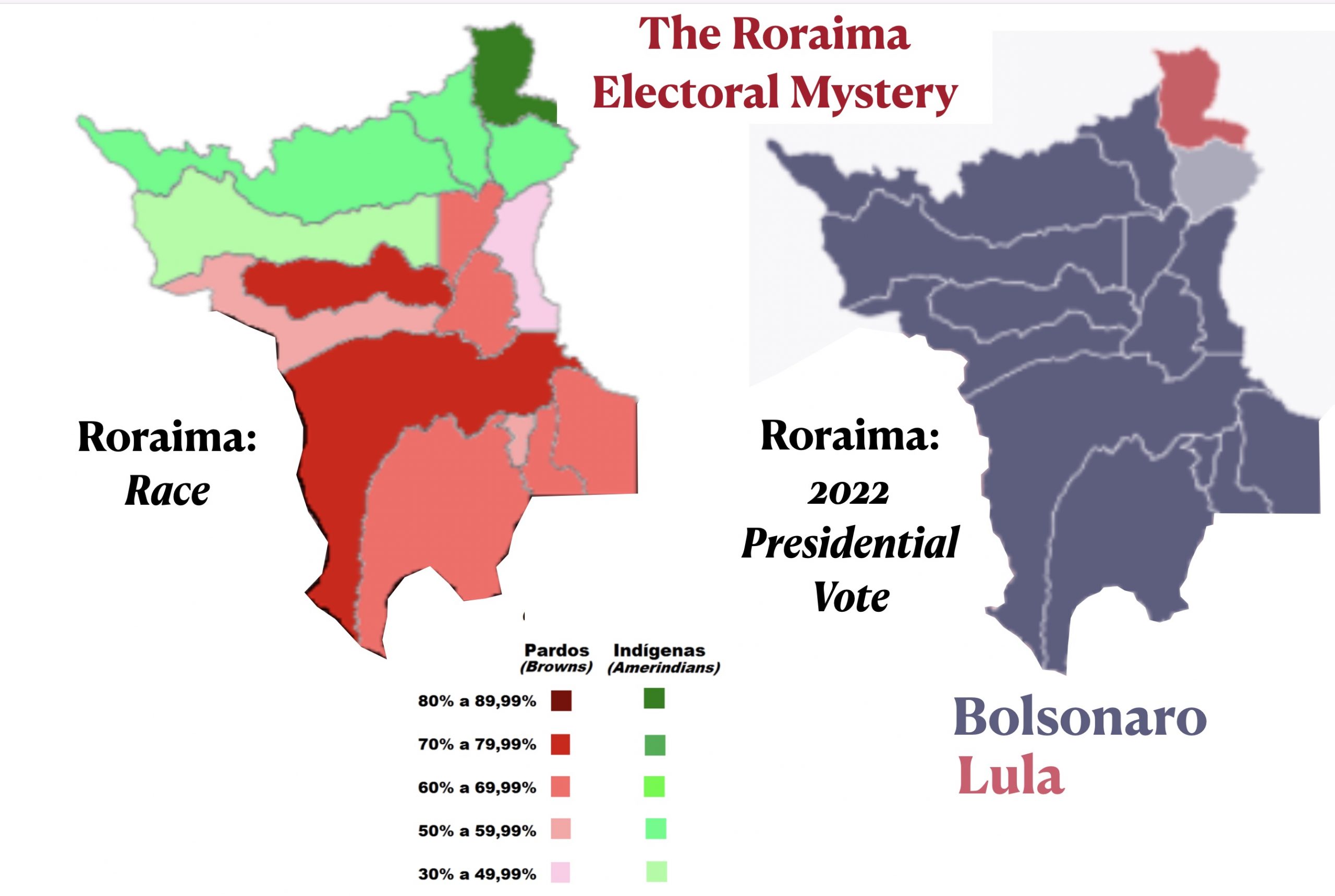 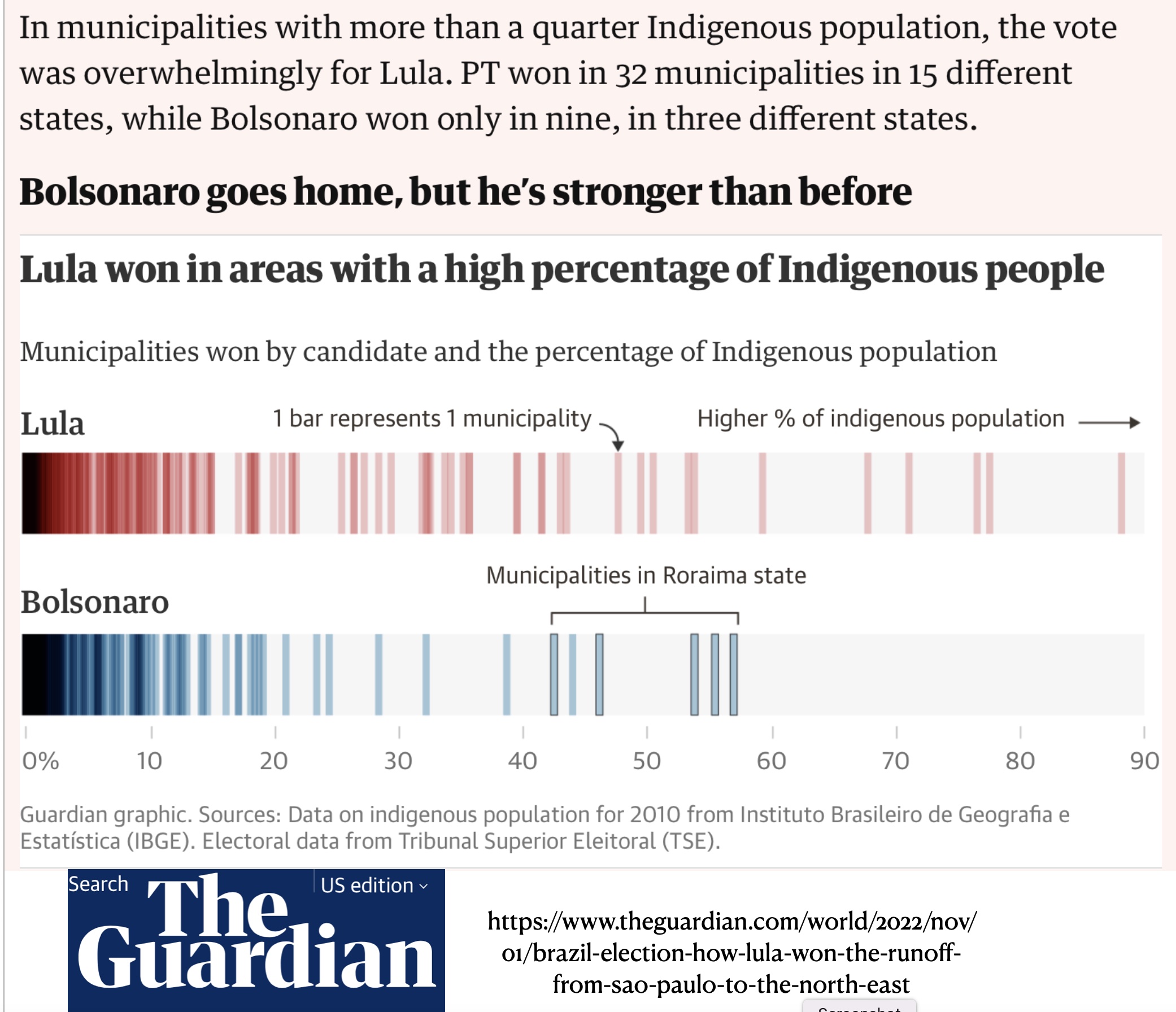 The electoral victory of Bolsonaro in the indigenous-majority municipalities of northern Roraima is not easily explained. An interesting graphic in The Guardian notes this oddity (posted above) but offers no explanation. A recent Al Jazeera article reports, unsurprisingly, that indigenous leaders in the state see Bolsonaro as a threat and have strongly supported Lula. The article also claims that the indigenous residents of Roraima have not received any benefits from the mining boom. As the author, writing before the election, notes:

If re-elected with enough support in Congress, Bolsonaro could try to push through his long-planned bill to allow mining and other industrial activities on Indigenous lands. As is the case with many Indigenous territories, official requests from companies to mine in Raposa Serra do Sol, including proposals for both gold and diamond mines, have increased since Bolsonaro took office, according to data compiled by the monitoring group Amazonia Minada and seen by Al Jazeera.

“If Bolsonaro is re-elected, we will see a continuation of anti-Indigenous policies,” Antenor Vaz, a former coordinator with Brazil’s Indigenous agency Funai who now works as an independent consultant, told Al Jazeera. “Raposa Serra do Sol would face even more pressure from illegal gold miners, as well as large landowners from outside the reserve.”

We thus encounter a mystery: why did most voters in heavily indigenous northern Roraima opt for Bolsonaro? Several possibilities come to mind. In Lula’s stronghold of northeastern Brazil, the 2022 election was marked by voter intimidation and suppression. Even the Federal Highway Police, allied with Bolsonaro, tried to delay or prevent people from reaching the polls. Could similar tactics explain the anomalous voting patterns of northern Roraima? I have seen no evidence of this, but my research has been limited. It is also possible that many indigenous people simply did not participate in the election, although Brazil does have compulsory voting.

It does seem that this apparent mystery deserves investigation by someone who knows more about Brazil, and Roraima, than I do.