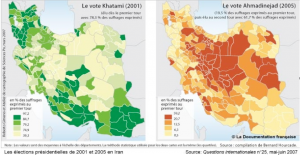 An earlier GeoCurrents post on the 2013 Iranian presidential election highlighted a slight tendency for conservative candidates, such as Saeed Jalili, to do better in the core, Farsi-speaking regions of the country, and for reformers to gather more votes in peripheral areas, especially in the Azeri-speaking northwest and the Balochi-speaking southeast. Intriguingly, earlier elections in this century show the same pattern but with greater intensity. A French map pairing the 2001 first-round election showing for Mohammad Khatami, a reformist, with the 2005 first-round vote for Mahmoud Ahmadinejad, a conservative, illustrates this tendency clearly. But a number of exceptions are also apparent on the map. On the provincial level, largely Farsi-speaking Fars exhibited relatively little support for Ahmadinejad in 2005, and gave a relatively large percentage of its votes to Khatami in 2001. A number of more pronounced exceptions are found at the district level. 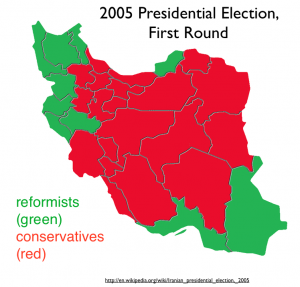 The Wikipedia has posted several interesting maps of the first round of the 2005 election. One map divides Iran into two regions, one that gave most of its votes to reformist candidates (in green), and the other that supported instead conservative candidates (in red). Here the strength of reformist sentiments in the northwest and in southeast is clearly evident. It is not clear, however, how the creator of the map classified all the candidates in this election. The accompanying article places Akbar Hashemi Rafsanjani, who took a plurality of votes in three provinces, in neither the reformist nor the conservative camp, regarding him instead as a “trans-party” candidate. It would require tedious calculations to determine how Rafsanjani’s votes were tabulated for the map. 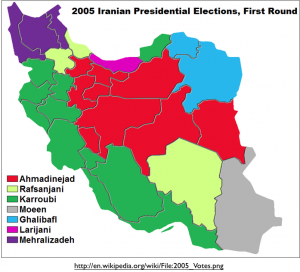 Another Wikipedia map of the first round of the 2005 election shows which candidate took first place in each Iranian province. As can be seen by comparing the two, the reformist candidate Mehdi Karroubi won a number of provinces that nonetheless gave a majority of their votes to conservative candidates in this seven-man race, including Fars, Bushehr, and Khuzestan. The most striking pattern on this map, however, is the strength of regionalist and ethnic voting proclivities. As can be seen on the GeoCurrents map, the reformist Karroubi did best in his native Lorestan Province. Another reformist  Mohsen Mehralizadeh, an ethnic Azeri, took only 4.4 percent of the national vote, but he triumphed handily in East Azerbaijan and took a plurality of votes in West Azerbaijan and Ardabil. Ali Ardashir Larijani, a conservative candidate, came in first in only one province, Mazandaran; it is probably not a coincidence that his family is based in that province. Mohammad Bagher Ghalibaf, another conservative, did much better in his native Khorasan than elsewhere in the country. 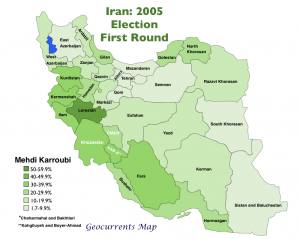 Less easily explained was the extremely strong showing of the reformist candidate Mostafa Moeen in Sistan and Baluchestan in the southeast.  Moen, a prominent physician, was born in Esfahan (Isfahan) Province in central Iran and established his medical career in Shiraz University in Fars Province. He seems to have triumphed in the restive southeastern province of Sistan and Baluchestan by promising to address ethnic and religious complaints. As the Middle East Research and Information Project explains:

In the presidential election of 2005, the reformist candidate, Mostafa Moin [Moeen], promised to redress ethnic grievances and appoint Sunni cabinet members. His largest percentage of the vote came in Sistan and Baluchestan. Of the 874,353 votes cast in the province, 479,125 went to Moin. President Ahmadinejad got 47,070.

In Iran’s 2009 election, the incumbent candidate Mahmoud Ahmadinejad beat three challengers in the first round, taking 62 percent of the vote and thus avoiding a second-round election. This election, however, was viewed by many experts as fraudulent, rendering maps of the results suspect. The official map, posted here, shows challenger Mir-Hossein Mousavi, an ethnic Azeri, winning only a few districts, located mostly in reformist strongholds in the far northwest and southeast. As the GeoCurrents map shows, Mousavi also did relatively well (in the official vote) in greater Tehran. 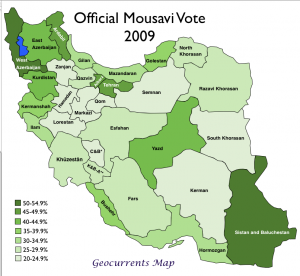 Intriguingly, Mousavi also officially won several districts in Yazd Province in the center of the country, including Yazd City, population 423,000. Unlike most parts of central Iran, Yazd has leaned strongly in a reformist direction in recent elections. It is noted as the main center of Zoroastrianism in Iran, but its Zoroastrian population is still minor; according to the 2012 census, Iran as a whole contains only 25,271 adherents of this ancient faith. Perhaps more significant is the fact that Yazd is a significant industrial center. Resource competition may also be a factor. Yazd is the driest city in Iran, receiving on average only 1.9 inches (48 mm) of precipitation annually. Yazd contends with neighboring Esfahan (Isfahan) Province for water, which may have generated discontent with the Iranian government. Such water controversies intensified earlier this year. The focus of the current controversy, however, is Esfahan, though Yazd features prominently. As France 24 reported:

Outraged that precious water from their local river is being diverted, last week a group of farmers in Isfahan, Iran destroyed a pump channelling water to the city of Yazd. They’ve been guarding the pump day and night ever since, refusing to let the authorities fix it. Meanwhile, residents of Yazd are suffering from a severe water shortage, leading to fears of unrest there.

All week, the farmers guarding the pump, which is located just outside Isfahan, have been clashing with police. According to opposition news sites, Wednesday and Thursday’s night’s clashes have been the worst yet, with police opening fire on protesters with rubber and lead bullets, wounding many. Despite this, the demonstrators – whom our Observer in Isfahan says number in the several thousand – have stayed put.

The local branch of the Iranian Revolutionary Guard blames “rebels” for fostering violence, and says the clashes have resulted in injuries and arrests, without specifying any numbers. It also accuses them of attacking a local base belonging to Basij paramilitary volunteers.