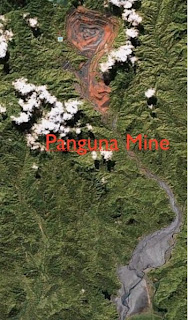 In June 2010, the Autonomous Region of Bougainville in Papua New Guinea (PNG) voted out three quarters of its parliamentary representatives along with its president. Whereas the outgoing leader was a former revolutionary committed to independence, the newly elected chief executive favors continuing ties with PNG. Most sources, however, do not see a loss of interest in sovereignty. The election focused on governmental competence, which the voters of Bougainville evidently found wanting in the former administration. Another divisive issue was the future of the shuttered Panguna mine. While most candidates supported reopening, they disagreed over who should carry it out. Some favored returning control to the former operator, a subsidiary of global mining giant Rio Tinto; others argued for turning to Chinese investors. 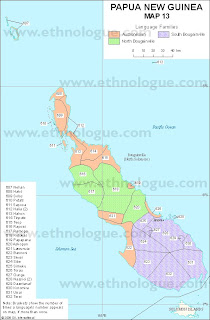 Security formed another electoral concern. Interethnic strife remains deadly, although the body count has diminished in recent years. Violence is concentrated in southern Bougainville where, according to The Economist (June 10, 2010, page 47), “some 14 armed militia groups still openly carry arms.” During the election campaign, the successful challenger accused the incumbent of condoning the warlords who hold sway over much of the south.

Ethnic tension in the Autonomous Region of Bougainville is linked to pronounced cultural fragmentation. Roughly two dozen languages in three families are spoken by the region’s 175,000 inhabitants. Two of these families, North Bougainville and South Bougainville, may be unique to the island. They were formerly classified within the Papuan family, but linguists no longer think that the “Papuan languages” constitute a genuine group, descended from a common ancestral tongue. Other forms of cultural distinctiveness further divide the peoples of Bougainville. According to the delightfully discursive Wikipedia article, among the northern peoples of Bougainville, “Cheerful friendliness is the prevalent norm. Austronesian Bougainvilleans and especially Bukas value outgoing openness, chattiness, a generally friendly mien.” South Bougainvilleans, in contrast, are said to “value privacy, discretion, quiet. Just listen to the silence of their markets and religious and political gatherings. When they are contemptuous of ‘redskins’ and ‘mastas’ (i.e. white people) it’s not that they are vulgar racists as to the colour of your skin. It’s that they find noisiness and intemperate speech shocking and impolite.” 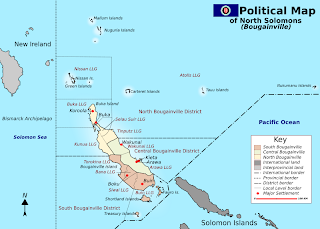 On an unrelated issue, Bougainville also offers a lesson on human perceptions of spatial scale. The otherwise excellent article on the island’s problems in The Economist magazine begins as follows: “The tiny troubled island of Bougainville has a new president …” Tiny? Bougainville is the 79th largest of the world’s roughly 100,000 inhabited islands. It covers more territory than such substantial islands as Cyprus, Crete, or Corsica. Bougainville is almost as large as Hawaii, which is called “the big island” in reference to the fact that it is seven times the size of Oahu, the state of Hawaii’s demographic, economic, and political center. Yet even Oahu, which covers almost 600 square miles, is almost never described as “tiny,” a term best reserved for islands like Australia’s Norfolk (13.3 square miles).

My point is not so much to chide the normally astute Economist for an uncharacteristic slip as to illustrate a common problem in geographical perception. Unfamiliar places far from one’s homeland tend to diminish in apparent size, as illustrated by Saul Steinberg’s famous “view of the world” New Yorker cover. A tendency to mentally shrink exotic places seems to be a natural human disposition. We should be vigilant against it if we want to remain geographically accurate.