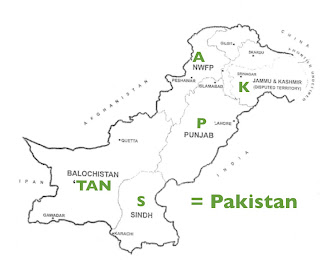 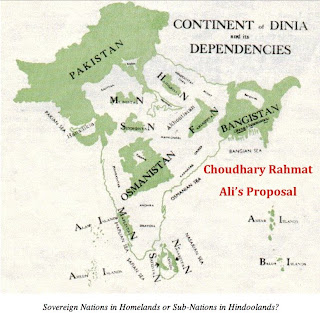 “Pakistan” may denote the “land of the pure” in Urdu, but the word originated as an acronym. In the 1920s and ‘30s, Muslim leaders in British India began to embrace the idea of a separate political homeland for their community, but no name was readily apparent. In a 1933 pamphlet, Choudhary Rahmat Ali coined the term that stuck, deriving it from letters in the names of its regions. As he later put it: “PAKSTAN – by which we mean the five Northern units of India, Viz: Punjab, North-West Frontier Province (Afghan Province), Kashmir, Sind and Baluchistan.” The “i” in “Pakistan” was later inserted to make the word flow more naturally in Urdu.

Fourteen years later, the country of Pakistan came into existence, but it was not the land envisaged by Ali—and he was not pleased. Ali’s Pakistan was to encompass the entire Punjab and then some, but when British India was partitioned, so too was Punjab, its eastern districts going to India. Ali condemned Mohammad Ali Jinnah, the country’s founder, for accepting a truncated Pakistan. But the new state incorporated a substantial territory not included in his original formulation: East Pakistan. East Pakistan would secede to become Bangladesh in 1971, but for the first two decades of independence it was one half (by population) of a bifurcated country, separated from the rest of Pakistan by a thousand miles of enemy territory.

Ali’s omission of Bengal from Pakistan did not imply a lack of concern for the Muslims of eastern British India. By 1940, he decided that they should form the core of a separate country to be called Bangistan, also deemed Bang-i-Islamistan. Ali dreamed of additional Muslim states emerging out of Britain’s South Asian empire. The most significant was “Osmanistan,” to be constructed from Hyderabad, a Muslim-ruled princely state* with a clear Hindu majority. Jinnah also wanted Hyderabad for Pakistan, but the idea was hardly feasible, considering its envelopment by India. The Indian military settled the matter in 1948 by forcibly annexing Hyderabad in Operation Polo, so-called for the territory’s 17 polo grounds. (In the 1930s, the Nizam [ruler] of Hyderabad was reputed to be the world’s wealthiest person.)

It would be easy to dismiss Choudhary Rahmat Ali’s archipelagic map of would-be Muslim-dominated states in South Asia a historical curiosity but for the fact that it continues to pop up on numerous South Asian websites. On Pakistani nationalist and Islamist sites, the image bolsters arguments that South Asia’s Muslim population was short-changed by partition. One blogger posted the map with the tagline “this is what we asked for”—followed by a close-up view of the greater Pakistan depicted on the same map, captioned as “we were cheated out of this.” Hindu nationalist websites use the same map to warn their compatriots that India remains vulnerable to Muslim irredentist designs, and to castigate the Indian government for not doing more to defending its Hindu traditions and populations. On one “Hinduist” website, Ali’s map illustrates the thesis that:

Under the political umbrella of ‘Secularism’ on paper and Anti-Hindu Pseudo-Secularism in practice, the Congress Party under Nehru, Indira Gandhi, Rajiv Gandhi and now under Sonia Gandhi have given categorical cubic content — political, Islamic, evangelical and anti-Hindu — to the above proposals of Chaudhary Rahmat Ali ….

Despite the uses to which his writings are currently put, Ali himself was concerned about rather different issues. His own writings are notable not so much for their pro-Muslim tenor, but rather for their antipathy against high-caste Hindus, whom he saw as exploiting South Asia with British connivance. Rather than wanting to create exclusively Muslim societies, he envisaged Muslim-led states founded on cross-faith coalitions that included the lowest-caste Hindu groups. As he put it:

It is time to realize that we, the non-Indian nations, who comprise the Muslims, Dravidians,** Akhoots (Untouchables), Christians, Sikhs, Buddhists, and Parsis, are, and ever have been, the victims of “The Myth of Indianism.” That is the Myth which teaches that India is the country of “India,” i.e., the exclusive domain of Caste Hinduism and Caste Hindoos and which has been built up by the Caste Hindoos, buttressed by the British and, thanks to our own folly, believed by the world.

Ali found the entire concept of India repugnant, infused, or so he thought, with Brahmin ideology. As an alternative term for South Asia, he proposed “Dinia,” an anagram of “India.” As can be seen on the map posted above, he insisted that Dinia forms a continent in its own right, owing to its separation from other landmasses by “mountain chains [and] high seas.” Here Ali stands on relatively firm ground; by strictly geophysical criteria, South Asia makes a much better continent than Europe. But Ali was ultimately concerned not with physical geography, but rather with fashioning a new kind of cultural-political space. By recognizing Dinia as a continent comparable to Europe, he thought that its many constituent “nations” would be able to realize their own political aspirations as autonomous polities within a larger sphere of social interaction. As he framed it:

… the Movement stands for the replacement of “Indianism” by “Dinianism” and of “countryism” ” by “Continentalism.” This it does for the good of all the nations concerned. For only “Dinianism” and “Continentalism” can save the nations from the doom awaiting them in the country of India, and secure them their permanent deliverance in the Continent of Dinia. That is a Continent of sovereign nations, living in separate homelands, working out their individual national destinies in their own ways, and making their national contributions to the solution of the common problems of Dinia, of Asia and of the world.

Choudhary Rahmat Ali’s Dinia proposal was an imaginative attempt to craft a novel form of political geography. Whether it was an honest one is another matter, as it is hard to imagine how the plan could have benefitted “all the nations concerned,” especially those of the majority “caste Hindus.” Its intricate parceling of political space would probably have necessitated massive population transfers and would at any rate have been a nightmare to implement. Whatever its merits or flaws, the scheme’s bearing on current-day South Asian geopolitical disputes is marginal at best. But that does not stop it from being politically used by hard-line factions.

**By “Dravidian” Ali means not speakers of Dravidian languages, which would include many members of high and mid-level castes, but rather the lowest-caste members of the Dravidian-speaking community.