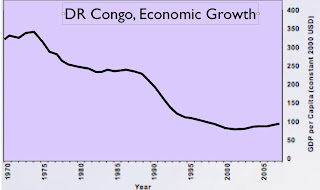 The ongoing war in the Democratic Republic of Congo is reputed to be the world’s deadliest conflict since World War II. Most observers estimate the death toll at around 5.4 million deaths; some figures put the toll as high as 6.9 million. One controversial 2009 report—from the Human Security Report Project of Simon Fraser University—claims that the actual death count was less than a million. Such wild discrepancies suggest how difficult it is to collect accurate information in a place as anarchic as DR Congo. 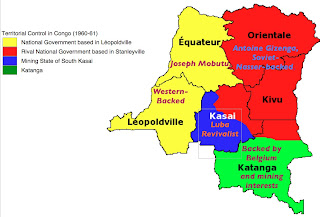 The Democratic Republic of Congo isn’t much of a democratic republic, but that’s not its major problem. More serious is that it doesn’t really function as a country at all. The government hardly governs even in the portion of its territory that it actually controls. Our reference works mislead us when they classify the DRC is a “developing nation-state,” as they habitually do. It certainly isn’t developing (see the chart above), and its governmental apparatus remains miniscule; the DRC takes in less revenue annually than Haiti ($700 million as opposed to $961 million), a deeply impoverished country a fraction of its size. National identity is weak at best. Those Congolese who went to school learned that they constitute a Congolese nation, a lesson that many have apparently taken to heart, but when push comes to shove regional and ethnic cleavages deeply divide. To put it bluntly, since independence in 1960, the Democratic Republic of the Congo has been a de-developing, non-national Potemkin state: a façade of a country with scant substance. 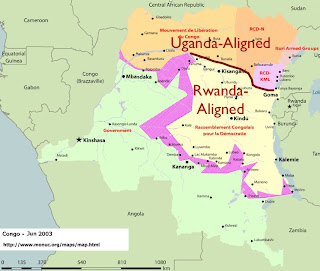 The DRC owes its existence to the wild greed of Leopold II, king of the contrived state of Belgium. Desperate to put his mark on the globe, Leopold unleashed his agents, starting with Henry Stanley, to cut a swath of terror across central Africa. Local people were forced to collect vast amounts of wild rubber; if they failed to meet quotas, hands were chopped, and often heads as well. At the Berlin Conference of 1884-1885, Bismarck and the other European leaders simply awarded Leopold the bulk of central Africa as his personal domain, calling it the Congo Free State (ironies run deep here). After word of the carnage in the Congo reached global attention, Leopold lost his African estate to his own government, and in 1908 the Belgium Congo was born. When Belgium abruptly withdrew from Africa in 1960, the Congo almost immediately split in four (see map). It convulsed with violence through the first half of the 1960s, as regional leaders turned to either the Soviet Union or the United States for support. Che Guevara came to mentor Laurent Kabila, founder of the DR Congo, in the arts of revolutionary war.

Relative stability, but little else, came to Congo in 1965 with the dictatorship of Western-backed Joseph Mobutu, who renamed himself Mobutu Sese Seko just as he rechristened his country Zaire. Reportedly the third highest grossing kleptocrat (thief-ruler) in world history, Mobuto made off with an estimated $5 billion in his 32 years of rule; only Indonesia’s Suharto and the Philippines’ Ferdinand Marcos stole more. But when one considers the vastly greater resources of Indonesia and the Philippines, Mobutu must take first place. While Indonesia prospered and the Philippines merely stagnated under kleptocratic rule, Mobutu’s realm steadily declined. When the Cold War ended, its economy collapsed. In the mid-1990s, Zaire collapsed as well. Its demise came in 1997 when Rwanda-backed Joseph Kabila, no longer a Marxist, seized control. A year later, his disappointed Rwandan backers sent another army to replace him. As Rwandan forces were closing in on Kinshasa, Angola, Namibia, and Zimbabwe (with a little help from Chad and Libya) stepped in to defend the Kabila regime. By the beginning of the millennium, DR Congo had fractured into a complex welter of militia-run territories – the geography of which no map adequately conveys. Increasingly, these militias came to fight, with extreme brutality, over access to resources, particularly coltan (a rare mineral used in the manufacture of electronics).

It is quite telling that Rwanda – a country a fraction the size of DR Congo that had just endured its own genocidal hell – could treat the vast DR Congo as its pawn. This is not something that would have happened to a genuine nation-state. (To be continued.)