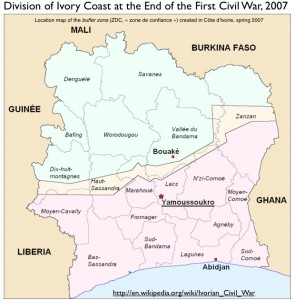 Understandings of the recent conflict in Ivory Coast (officially, Republic of Côte d’Ivoire) vary significantly among different sectors of the news media. Mainstream sources in the United States often mention the Ivorian Civil War of 2002-07 that effectively divided the country in two (see map), but they focus primarily on the presidential election of 2010, which the defeated incumbent Laurent Gbagbo refused to honor. The framework applied is generally one of political obstruction and transformation, with Gbagbo representing the old order of unaccountable African strongmen, and election-winner Alassane Ouattara depicted as upholding democratic rule and responsible governance. In this reading, honoring the verdict of the Ivorian people required the military intervention of France, with the approval of the United Nations. Reports from the African press, however, present a much less sympathetic picture of Western military involvement. As detailed in a recent Le Monde article (translated and reprinted in The Guardian), journalists in Mali, Burkina Faso, and Senegal welcomed the downfall of Gbagbo but not the foreign intervention that ended his rule. Ghanaian and Cameroonian newspapers, on the other hand, more often denounced the regime change as a French neo-imperial power-grab, stressing the atrocities allegedly committed by Ouattara’s forces. Ghanaian reportage can indeed be harsh, as demonstrated in a recent GhanaWeb post—which may set a record for the most lavish use of exclamation marks in an article:

Right now, the elected president according to Ivorian law has been kidnapped by the French and Ouattara’s men and, there is no outrage! No pride! Very few men of integrity who have spoken out!! All of this while in essence a precedent has been set which states that in Africa our laws don’t matter! Our constitutions are toilet paper, and if the west does not back who wins their UN neocolonial army will bomb you out of power!!!!

Despite differing interpretations, the mainstream media, whether in the United States or Africa, tend to frame the conflict as one of national party politics and international geopolitical maneuvering, downplaying ethnic and religious dimensions. Religion, however, is emphasized in certain highly partisan segments of the media, which see the contest as one between Christianity (Gbagbo) and Islam (Ouattara). Here France again gets singled out for censure, though for opposite reasons in different quarters. Muslim reporters have long castigated France for supporting Ivorian Christians while thwarting its Muslim population; today’s anti-Islamic websites denounce France for supporting Ivorian Muslims and thwarting its Christian population.

A 2000 Islam for Today article lays out the former perspective most explicitly. According to its author, Muslims constitute sixty percent of the Ivorian population, yet have been systematically excluded from the government. Instead, up to the turn of the millennium, “power has rotated among the Christian Baoule people of central and eastern Ivory Coast, who account for about 22% of the 16 million citizens…” France, the author contends, was largely to blame: “The Islam-phobic French empowered the mainly Christian Baoule at the cost of the Muslim majority. Today, the country’s Muslims are determined to reclaim their due.”

Anti-Muslim websites dispute the direction of French favoritism, while agreeing about Muslim designs and French perfidy. A recent posting in the hard-right website Atlas Shrugs claims, “We are witnessing an Islamic takeover of the Ivory Coast. And the French (and the UN, US, and Europe) are helping them. Sick.” The post further contends that Ivory Coast is “about to toggle” from being a Christian-majority country to a Muslim-majority country, largely because of unrestrained, illegal immigration from Muslim lands to the north. Such commentators often denounce the close personal ties between the French political elite and both Ouattara and his Algerian-born French wife, Dominique Folloroux-Ouattara—although rumors that Nicolas Sarkozy himself presided over the couple’s wedding are apparently not true.

As the disparate figures used in these articles indicate, the religious demography of Ivory Coast is highly debatable. Overall, the entire conflict is much more complex than is indicated by most recent media reports. Religion does play a role, but so do a number of other factors. GeoCurrents will thus delve into the Ivorian situation over the next week, examining maps of ethnic identity, religious adherence, electoral returns, and migration flows in hopes of bringing some clarity to an intricate, murky, and important situation.