As the past several GeoCurrents posts have explained, sovereign states make poor units of socio-economic comparison due to their vast size disparities. But issues of scale are not the only reasons for considering an alternative scheme of division. In the standard model of global affairs, countries are the all-purpose and essential units of human organization. According to this view, independent states are neatly demarcated geo-bodies administered over their entire expanses by globally recognized, fully autonomous governments, their inhabitants bound together by common sentiments of national solidarity. Yet the nation-state ideal is seldom fully realized. The world is replete with nationless states, stateless nations, contested nationalities, vacuums of sovereignty, and so on. As Jim Wilson perceptively pointed out in a GeoCurrents comment, such geopolitical “anomalies” are too common to be considered anomalous. The political structure of the world, in short, is far too complex for the reigning model. As a result, the global representation found on country-based political maps is simplistic at best and misleading at worst. On a world map, Somalia has the full appearance of a sovereign state; in actuality it has virtually none of the substance.

Over-reliance on a flawed world model results in more than intellectual mischief. In the early years of this century, U.S. military and political planners had little doubt that Afghanistan and Iraq could be quickly and cheaply stabilized and democratized, as it was assumed that they were coherent nation-states, their people tied together by bonds of common affiliation, and hence willing to work together to achieve national aspirations. A decade on, trillions of dollars and many thousands of lives have not proven adequate in either case. As the United States lurches through its second economic crisis in three years, its financial resources stretched near the breaking point, those billions upon billions of dollars that have flowed into nation-building endeavors in Iraq and especially Afghanistan increasingly seem like poor investments. Had we been less beholden to a normative geopolitical model, perhaps such inordinately optimistic policies would not have been pursued.

The goal of the Demic Atlas is to denaturalize the state-based picture by viewing the world through an alternative lens. It is not to argue that states are passé or unimportant in any way, much less that the standard political map should be abandoned. The contention is rather that countries should not be the only units used for depicting the socio-economic differentiation of the human community. Different modes of division can show different patterns and, we believe, yield new insights.

The classification scheme employed in the Demic Atlas will seem odd to most viewers, and shocking to some. The standard world map and model are so ubiquitous, so taken-for-granted, that any alternative is bound to appear perverse. Many if not most educated people have also been so schooled in nationalism that their own countries at least seem inviolable, forming natural units of not just political power but also of social and economic organization. Quick previews of the demic world map—which will be posted here next Tuesday or Wednesday—provoked quick objections, as viewers found it wrong to see their own countries sundered and then re-aggregated with pieces of other states. But this is precisely the purpose of the exercise: to unsettle conventional notions of global geographical organization by challenging the essentialism of the sovereign state. 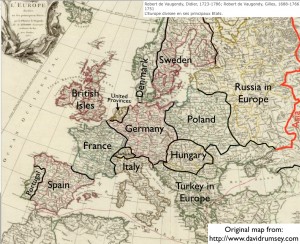 As instinctive as it has become for us to divide the world along geopolitical lines, it is not a particularly long-standing maneuver. Old maps reveal that before the 1800s, European cartographers typically deployed a hybrid system of terrestrial division. In the early modern period (1500-1800), they typically began by splitting the world into continents, and then carving each of the resulting landmasses into a handful of major divisions. Some of these sub-continental entities were geopolitically delimited kingdoms, empires and the like, such as France, Russia, Persia, and China. Others were former sovereign powers that had long lost that standing, such as Hungary and the German (or Holy Roman) Empire, while others were (at the time) mere regions with no political coherence (Italy, Arabia, and India, for example).* Such units were by no means of equal size, as those of Asia dwarfed those of Europe, reflecting the Eurocentrism of European cartographers. But within each continental frame, all the constituent “countries” were roughly comparable. It would have struck an 18th century cartographer as absurd to elevate the pocket states of northern Italy, let alone those of western Germany, to the same level as France or Spain on their basic maps. Early modern cartographers did occasionally depict the small polities of Italy and the Holy Roman Empire, but only when they were explicitly illustrating the geopolitical order. Maps devised for general purposes relied instead on a hybrid divisional scheme.

A somewhat similar situation obtained in early modern Japan. Before the Meiji Restoration of 1868, Japan was a semi-unified state; the Tokugawa Shogunate exercised hegemony over the main islands, but over 200 feudal lords maintained autonomy within their own domains, many of which were spatially dispersed. Tokugawa cartographers by and large ignored the complexly fractured political order that resulted, and instead mapped the archipelago in accordance with the provinces of classical Japan—units that had no political significance at the time. The continued use of a system of defunct subdivisions in basic maps has struck many observers as a quirky anachronism, but as Kären Wigen has shown in her recent book, A Malleable Map, the strategy had its own compelling logic. The provinces of Tokugawa Japan were observational rather than administrative units, providing spatial containers for place-specific information. Provinces served this purpose well because they were deeply rooted in historical memory, were no longer politically charged, and were spatially stable. Also, unlike the domainal territories of Tokugawa Japan, they were relatively compact and of roughly similar size.

Like the provinces of Tokugawa Japan, the spatial divisions in the Demic Atlas are designed for observational purposes: to serve as politically neutral containers for marshalling socio-economic data. Unlike the old Japanese provinces, of course, they are nakedly artificial constructs without historical precedent. Whether or not such manufactured units prove useful is for readers to decide.

*Intriguingly, mapmakers of the time sometimes claimed to base their divisions on geopolitical criteria, yet in practice they did not exactly do so. Consider Thomas Kitchin’s 1787 map, “Europe Divided into its Empires, Kingdoms, States, Republics, Etc.,” published in London by Robert Sayer. As actually mapped, the “principal parts” of Europe included such non-sovereign entities (at the time) as Italy, Germany, Ireland, and Hungary. The accompanying text notes that “Germany is full of sovereign princes and counts …, every one of which is more free and absolute than several crowned heads.” A 1742 version of Guillaume Delisle’s Atlas Nouveau (published in Amsterdam) likewise contains a map purporting to show Asia “accurately divided into Empires, Kingdoms, States, and Peoples,” yet it depicts all of mainland Southeast Asia as one entity, and all of central and northern Asia as another (“Tartary”). These kinds of maneuvers were typical of the time.

Enlightenment-era views on the geopolitical division of space are perhaps best represented in the Encyclopédie Méthodique par Ordre des Matières (“Methodical Encyclopedia by Order of Subject Matter”), a 200-plus-volume reference work published by Charles-Joseph Panckoucke, designed to follow the more famous encyclopedia of Denis Diderot. Here the Europe entry (vol. 2, page 574) details the division of the landmass into three empires (Russia, Germany, and Turkey-in-Europe), twelve kingdoms, one great ecclesiastical realm (the papal state), one archduchy, one grand duchy, four great republics, and four less powerful republics. Not all of Europe, however, was classifiable in this scheme, with northern Italy presenting particular challenges. In another entry, the encyclopedia describes Italy as “a great country of Europe,” noting that it has too many political divisions to report (vol. 1, page 94). The work also notes that the kingdoms and duchies of Europe are not all ruled by their own sovereigns. Although Hungary is listed as a kingdom (joined with that of Bohemia), the author allows that it is currently “under the House of Austria” (vol. 94, page 2).