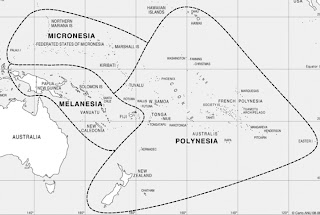 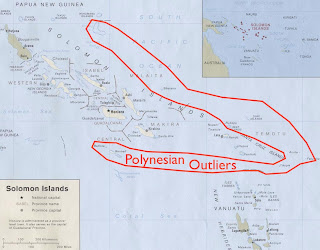 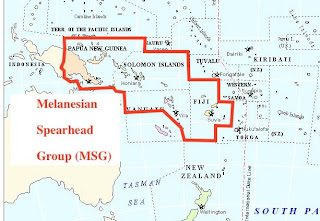 The islands of the southwestern Pacific are conventionally divided into Melanesia, Micronesia, and Polynesia, based on the writings of the French explorer Jules Dumont d’Urville from the 1830s. The etymology is Greek, with the base word nesos — hence “nesia” — meaning island, while “mela-,” micro-,” and “poly-” denote black, small, and many, respectively. The terms were not well chosen. There are “many” islands in all three regions. “Micro” islands (atolls) are also widespread in Melanesia and Polynesia; and a number of Micronesian islands, such as Guam, are substantial. And whereas Micronesia and Polynesia were named after the supposed attributes of the islands themselves, Melanesia received its name from its indigenous inhabitants, in reference to their skin color.

In early anthropological studies, Melanesia, Micronesia, and Polynesia were thought to be differentiated by the traits of their indigenous human societies, but only Polynesia is now regarded as forming a genuine culture region. All Polynesian languages are closely related and clearly descended from a common ancestor, and similar cultural and political patterns are found throughout its vast extent. Micronesian and especially Melanesian cultures, on the other hand, vary significantly, with few unifying features.

Owing to its lack of cultural commonalities, Melanesia might be regarded as a “racial” region defined by the physical appearance of its inhabitants, but this tactic also falters. A recent genetic study indicates high levels of genetic differentiation between separate Melanesian populations, which are especially pronounced in the interior regions of the larger islands. The same study also found relatively few genetic links between Melanesians and Polynesians, even though the ancestors of the latter passed through Melanesia before reaching what later became Polynesia, spreading their Austronesian speech in many coastal areas. But if Polynesian and Melanesian peoples remained genetically and culturally distinct, their separation was not absolute. Some studies indicate a Melanesian origin of some Polynesian Y chromosomes, while the Melanesian archipelago of Fiji later experienced a substantial flow of both genes and social practices from the Polynesian islands of Tonga.

The ancestors of the Polynesians are believed to have moved from Taiwan through insular Southeast Asia and then the coastal stretches of Melanesia before arriving at the previously uninhabited islands of Tonga and Samoa. There they developed the distinctive Polynesian cultural complex that subsequently spread, thanks to their unsurpassed navigational abilities, trough the vast triangle formed by Hawaii, New Zealand, and Rapa Nui (Easter Island). Polynesian mariners also returned to Melanesia, where they settled on smaller islands outside of the main archipelagoes. Papua New Guinea, Solomon Islands, and Vanuatu contain many strictly Polynesian islands, known to anthropologists as Polynesian Outliers. If defined in purely cultural terms, Polynesia therefore intermeshes with Melanesia rather than forming the spatially separate area that is typically depicted on maps.

Although the varied people of Melanesia have few cultural or genetic bonds, they are gaining a sense of political solidarity, as we saw in last Thursday’s posting. Such newfound cohesion is perhaps best represented in the Melanesian Spearhead Group (MSG), a trade association composed of Papua New Guinea, Solomon Islands, Vanuatu, and Fiji. This Melanesian quartet seems to have drawn more closely together after the 2009 suspension of Fiji from the Pacific Islands Forum on charges of political repression and human rights abuses. Some scholars think that the MSG might “mobilise around Fiji, … as Fiji, forsaken by its traditional antipodean friends [i.e., Australia and New Zealand], ‘looks North’ to Asia, most particularly China and India, for new friends.” Melanesians are also banding together to protest what they see as anti-Melanesian prejudices held by other peoples. In the European cultural imagination, “Polynesia” has long connoted a tropical idyll of sensual delights, while “Melanesia” suggested savagery and cannibalism. Melanesian intellectuals insist that such views are deeply racist and need to be jettisoned.

Similar prejudice can be encountered among Pacific Islanders themselves. A June 24, 2010 article in Pacific.Scoophighlights the work of Dr. Tarcisius Kabutaulaka of Solomon Islands who is confronting the issue. Anti-Melanesian sentiments, he argues, are directly encoded in Polynesian speech: “[Melanesians] are referred to as uli in the Tongan language, which means ‘dirty,’ while in the Samoan language they are referred to as mea uli, meaning ‘thing.’” Professor Kabutaulaka added that the issue “is not often discussed openly amongst Pacific Islanders” as it is considered too sensitive. The Pacific.Scoop article goes on to discuss the racial animosity felt by Melanesian students when studying with other Pacific Islanders in such schools as the University of the South Pacific, a multi-campus institution jointly owned by the governments of a number of Pacific island countries. Several Polynesian students quoted in the same article, however, deny the prevalence of racism.