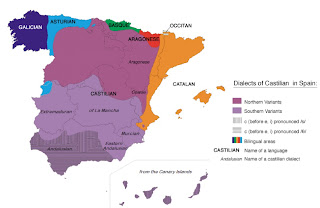 Controversies over identity and territory in Spain are not limited to the Catalan- and Basque-speaking areas. Calls for regional autonomy, nationality recognition, and even national status are being voiced elsewhere, too.

Andalusia in southern Spain is one such place. Some seek to enhance the autonomy of Andalusia as a whole, while others seek to divide it into two separate communities. Andalusia’s distinctive speech is classified as a dialect of Spanish — sometimes even as Castilian (see map above). As a result, it was not initially identified as one of Spain’s historical nationalities, much to the consternation of its people. Andalusia’s statute of autonomy was finally amended in 2006 to proclaim its historical nationality, but some Andalusians go further, demanding recognition as a nation. Their main political vehicle is the Andalusian Party; the smaller Nación Andaluza seeks outright independence. 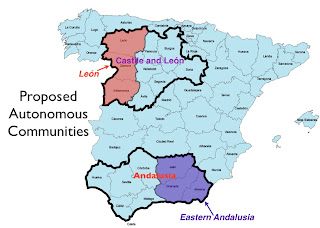 The differentiation of the Andalusian people from other Spaniards is based in part on historical class identity. Andalusia was a land of large estates worked by hired labor, with few of the small-scale peasant proprietors common in northern Spain. Long noted for its flourishing anarchist and socialist movements, today it still votes solidly left. But both large estates and Andalusian nationalism characterize the western lowlands much more than the rugged lands to the east. An organization calling itself The Platform for Eastern Andalusia regards the lowland-based regional government as overly centralized, accusing the political elite in Seville of exploiting the eastern uplands. This group calls for the creation of a new autonomous community to be constructed out of the provinces of Jaén, Granada, and Almería. 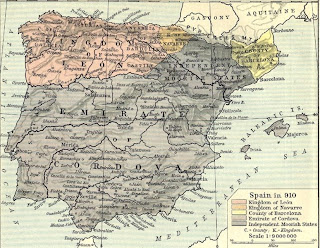 Elsewhere, linguistic differences reinforce historically based claims for new autonomous units. In northern Spain, advocates of “Leonesism” seek to build a self-governing community in the provinces of León, Zamora, and Salamanca, which currently belong to Castile and León. This area, they point out, had been the core of the independent kingdom of León, once the strongest Christian state in Iberia. León was annexed by Castile in 1301, but it persisted as a subordinate territorial unit until 1833. Autonomy advocates also stress the distinction of the Leonese language. Although Leonese is given some encouragement and protection by the existing autonomous community, it does not have the official status that its proponents desire. A few hard-core Leonese nationalists call for independence, but such a view is not popular. 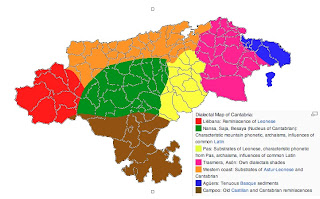 Leonese national identity confronts a problem in the distribution of the Leonese language. Most residents of both León and Zamora, and almost all of Salamanca, speak Spanish rather than Leonese as their first language; others grow up speaking Galician, which is sometimes viewed as a dialect of Portuguese. Linguists also debate the status of Leonese. The most common view is that it is merely a local form of speech in a continuum of dialects known as “Astur-Leonese,” whose center is located to the north in the Autonomous Community of Asturias.

It should come as no surprise that local partisans in Asturias proclaim the distinction of their own tongue, alternatively called Asturian or (yes!) Bable. Since 1980, the “Academy of the Asturian Language” has sought to codify and standardize this form of speech, and to stop its gradual replacement by Spanish. Even though Asturias is an autonomous community, Bable has no official standing, although it is sometimes used by the local civil service. The local government is also gradually changing official place names from their Spanish to their Asturian variants. But even if one excludes Spanish-speaking areas, not all of Asturias is Asturian-speaking. In the western part of the province, one finds dialects of Galician so distinctive that they are sometimes classified as forming their own language, Eonavian.

The Astur-Leonese group of dialects extends to the east of Asturias through much of the autonomous community of Cantabria. But again, debates over linguistic status abound. Some authorities view Cantabrian as a language in its own right, others as a dialect of Asturian, and others as an “ancient dialect of Castilian.” Due to the spread of modern Spanish, UNESCO has classified Cantabrian as a “language in danger of extinction.” As is true in neighboring regions, the diversity of speech forms here is notable; the Wikipedia map of linguistic map of Cantabria, reproduced above, locates seven distinct dialects.