Communist Insurgents and Ethnic Militias in Northern Luzon: The NPA Vs. the CPLA 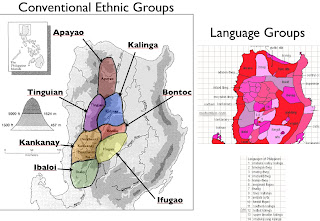 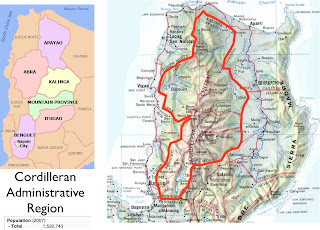 The main focus of insurgency in the Philippines has long been the Muslim southwest. But as discussed in last Friday’s post, the Maoist New People’s Army (NPA) remains active in remote areas throughout the archipelago. One of the NPA’s main zones of operation is the Cordillera of Northern Luzon, a rugged area divided into several provinces. Like Mindanao, the Cordillera long lay beyond the effective control of the Spanish colonial government. Until the 1880s, the culturally diverse peoples of the region (see map), collectively known as Igorots, retained tribal independence. They also kept their indigenous faith based on ancestor worship. Although Christianity spread widely in the 1900s, many Igorots remain proudly “Pagano” to this day.

The armed forces of the U.S. colonial government subdued even the most militant Igorot groups, such as the head-hunting Bontocs, relatively quickly during the first few years of the twentieth century. They did so through a combination of threats, reprisals, and rewards, with the crucial ingredient of treating indigenous culture with some respect. Surprising though it may seem, American administrators often favored tribal highlanders over Christian lowlanders, viewing the latter as having been corrupted by decadent Spanish culture and institutions while the highlanders remained hard-working, manly, and ready for American tutelage. Schools were established in many parts of the Cordillera, and to this day one can venture into some very remote districts and find elderly people fluent in English.

Tensions between the Cordilleran peoples and the Philippine government grew in the 1960s and intensified under the dictatorship of Ferdinand Marcos (1972-1986). Dam-building, mining, and forestry projects in the highlands threatened ancestral land-rights, turning many Igorots against the government and inducing quite a few to join the New People’s Army. In the 1980s, a new military force emerged to complicate the struggle, the Cordilleran Peoples’ Liberation Army (CPLA). Founded by a former Catholic priest, Conrado Balweg, the CPLA based its cause on indigenous rights rather than the class struggle preached by the NPA cadres. It too engaged the Philippine state in armed conflict. In 1987, I interviewed Father Balweg (as he was still called by his followers), a process that involved multiple transfers between vehicles and a brief period under blindfold before meeting him under the watchful eyes of his armed guards. He assured me that he wanted only peace, but that peace was only possible if indigenous land rights could be guaranteed.

After the fall of the Marcos regime in 1986, the new Aquino government began negotiating with the Cordilleran Peoples’ Liberation Army. The deal that was eventually reached was similar to that made with the Moro National Liberation Front. A Cordilleran Autonomous Region was to be created, joining the several highland provinces. Once the initial agreement was made, the CPLA essentially ended its armed struggle, even through the agreed-upon autonomous region was never actually created. The left wing of the Cordilleran people’s movement rejected the proposal as too accommodating, the various ethnic groups of the mountains quarreled over its political arrangements, and as a result inadequate support was gathered in two plebiscites. The only structural change was the emergence of a non-autonomous Cordilleran Administrative Region (see map above). But as the aggressive land-taking policies of the Marcos administration were generally abandoned, local animosity toward the government declined in most areas.

As the CPLA made peace with the Philippine government, it increasingly found itself fighting against its erstwhile comrades in the NPA. It is widely believed that the NPA assassinated Conrado Balweg in 1999. After Balweg’s death, the Cordilleran Peoples’ Liberation Army underwent several splits. As Bulatlat News reported in 2002, the NPA hotly denied rumors that it had entered a truce with the CPLA, labeling it a terrorist group that had engaged in “a long series of crimes against the revolution and the people.” The CPLA increasingly allied itself with the government, yet remained independent. In 1999, it shocked the Philippine government by sending fully armed troops into Baguio City, the former American hill-station (and second-home base for the national elite), after cowing a contingent of the Philippine National Police. A thoroughly embarrassed national government tried to force the CPLA to fold its command structure into that of the Armed Forces of the Philippines, but to no avail.

War continues to be waged in the Cordillera. On February 7, 2010, the Philippine Star reported that fourteen soldiers of the Armed Forces of the Philippines had been killed in the region as the government intensified its operations against “remnants of communist elements.” The NPA also continues to battle the still-independent CPLA. In a recent letter to the editor of the Philippine Daily Inquirer, a spokesperson for the allied Cordillera Peoples’ Democratic Front accused the CPLA of being “in the same sinking boat as the infamous Ampatuan private army … equipped and coddled by the military and the Arroyo regime… [The] purported new and reformed CPLA… must be immediately disarmed, disbanded and punished…” One must wonder who the author thinks should disband this army. The same Philippine military that his side is fighting against?

Indigenous militias often make common cause with leftist insurgents, but their aims generally remain distinct. While Communist forces usually seek to take over states, indigenous forces typically want to separate from them. In a word, the two groups foresee fundamentally different political maps.