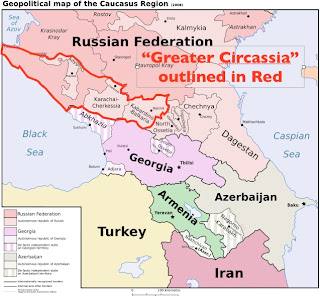 Yesterday’s post referred to the Ossetians as a people of “profound world-historical significance,” a phrase that fits their neighbors, the Circassians, even better. That members of the so-called White race are called “Caucasians” stems largely from the widespread nineteenth-century European notion that the Circassians, natives of the northwestern Caucasus, somehow represented the ideal human form. A hundred and fifty years ago, the Circassians were well known in Europe and the United States, celebrated for their bravery and especially their beauty. Mass-marketing advertisement campaigns hawked “Circassian lotion,” “Circassian Hair Dye,” and “Circassian soap”; P.T. Barnum even exhibited fake “Circassian beauties.” Yet in our time, this once-famous group has virtually vanished from view; when I recently asked a class of 160 Stanford undergraduates if anyone had heard of them, not a single hand was raised. 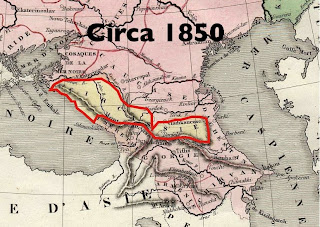 The Circassians’ world-historical significance derives not from their supposed physical attributes, but from the singular niche they occupied in the eastern Mediterranean from late medieval to early modern times. To put it starkly, Circassians served as elite slaves in the major Muslim states of the region. Although the notion of “elite slaves” may seem self-contradictory, unfree individuals could rise to very high positions. Muslim rulers had long staffed their armies in part with enslaved soldiers – Mamluks – and at several times and places such troops essentially took over the state. The Mamluk Burji dynasty that ruled Egypt from 1382 to 1517 was founded by, and composed largely of, Circassian soldiers of servile background. Circassian women who were exported into servitude could end up as concubines or even wives of Ottoman and Persian sultans. Such women could become powerful in their own right, especially if one of their sons rose to the top position.

The Circassians’ downfall came at the hands of the Russians in the 1860s. The Russia Empire reached across the Caucasus to encompass Christian Georgia in the early 1800s, but – as the map above indicates – it failed to subdue Circassia. (Note that the map incorrectly places Chechnya and adjacent areas within Circassia.) Having fought the Circassians for roughly a century, Russia’s leaders decided to expel the population. Some 80 to 90 percent of the Circassians were forced out; most found refuge in the Ottoman Empire, but nearly half died in the process. Today the Circassian population in Russia has recovered to number some 900,000. In Turkey, roughly two to four million people are of Circassian descent, and the Circassian community in Jordan numbers about 150,000. It is doubtful, however, whether Circassian culture can survive outside of the Caucasian homeland.

Circassian activists are now pushing Russia and the global community to recognize the events of the 1860s as constituting genocide. They hope to use the 2014 Winter Olympics in Sochi, Russia – once a Circassian port – to bring their historical plight to global attention. As Sufian Zhemukhov reported in the Circassian World website in September, 2009, “Most Circassians see the Sochi Olympics as an opportunity to plead their case, rather than as an offense to be resisted. Still, many Circassians have opposed the Winter Games on the grounds that they will take place on ‘ethnically-cleansed’ land. Some Circassian NGOs have branded the Olympics the “Games on Bones” and opposed construction work [that] could endanger important burial sites. In October 2007, … Circassian activists organized meetings in front of Russian consulates in New York and Istanbul to protest against holding the Winter Games in Sochi. Finally, the Circassian anti-Olympic movement began to seek official Russian recognition of the Circassian genocide and called on the IOC to move the Games.” (http://www.circassianworld.com/new/general/1382-circassian-dimension-2014sochi-szhemukh.html)

More immediately, Circassian activists want Russia to create a single internal republic for the four legally defined ethnic groups (the Adyghe, Cherkesm, Shapsugs, and Kabardin) that together constitute the Circassian people. That complicated issue, however, must be the subject of a later posting.