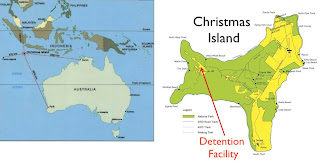 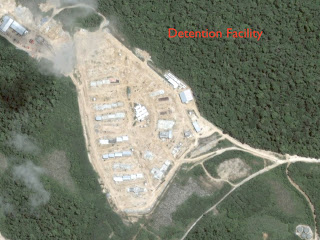 Christmas Island is 52-square-mile rainforest-covered limestone and basalt platform several hundred miles south of Java. Most of the island is a national park, sheltering a limited and highly distinctive native fauna. It is best noted for its eponymous red crab, a land dwelling crustacean than lives in rainforest burrows – in staggering numbers. At the onset of the rainy season, some 120 million red crabs migrate to the sea to spawn, overrunning much of the island. Intriguingly, early accounts make scant mention of the unavoidable crabs. Some ecologists speculate that the red crab population had been kept in check by the endemic Maclear’s rat that once populated the island, also in large numbers. The introduced black rat, however, evidently infected the native rat with an exterminating disease, perhaps allowing the crab population to explode (although we must wonder why the black rat was not able to similarly limit the crab). Currently, crab numbers are declining due to the spread of the yellow crazy ant, a highly invasive “tramp ant” species. Supercolonies of yellow crazy ants have formed, killing an estimated 20 million crabs and reducing the populations of several bird species. Efforts to control the ants are now underway.

Phosphate-rich Christmas Island was annexed by Britain in 1888. Workers came from China and Malaysia; their descendants form the bulk of the island’s current 1400 inhabitants. The phosphate deposits are largely worked out, and efforts to establish the island as a gambling center and as a spaceport have not been successful. Prior to 1993, Christmas had postal independence, allowing it to profit by selling stamps to collectors. The booming business of processing and incarcerating asylum-seekers and thwarted immigrants is now the island’s economic mainstay.

Like Norfolk, Christmas Island is a geopolitical anomaly: in this case, a non-self-governing territory of Australia, located outside of Australia’s migration zone (see yesterday’s post). The island does have an elected advisory council, and its residents do vote in Australian federal elections. But in the end, Canberra runs Christmas. In recent years, the national government has decided to remake Christmas Island into a detention center for refugees and undocumented immigrants trying to reach the Australian mainland. In 2007, the island’s administration was transferred from the Department of Transport and Regional Services to the Attorney General’s Office, reflecting its prominent role in Australia’s fight to control immigration.

The increased population is straining the island’s infrastructure – some say to the breaking point. Both the local inhabitants and the detainees are highly concentrated, roughly on opposite ends of the island. The expanding population of Christmas Island has increased the cost of living of the local inhabitants. Housing especially has gone up, as outsiders have been brought in to staff the detention facilities. As one local reported, “Now the island is at breaking point, the sewage treatment plant can’t cope, the power station can’t cope, the health system can’t cope, and the school can’t cope…” The housing shortage eased recently when a number of immigration workers were moved into Christmas Island’s mothballed casino. The detainees, meanwhile, are kept in bleak compounds on the far end of the island from the settlement. According to recent reports, the compounds will soon be expanded.