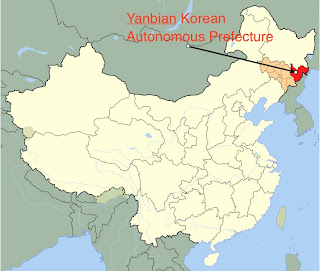 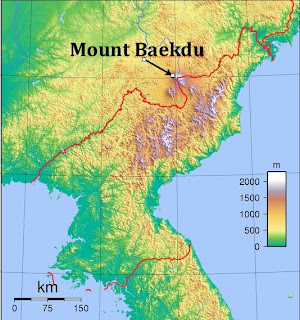 The Korean language extends well beyond North Korea’s boundary into Manchuria in northeastern China. Roughly two million Koreans live in China, mostly in the border zone. Almost half of them reside in the Yanbian Korean Autonomous Prefecture, where Korean cultural institutions receive official support. Although the area was part of several historical Korean kingdoms, its current Korean population stems largely from northward migration in the late 1800s and early 1900s. During this period, Korea was falling under Japanese domination, while southeastern Manchuria beckoned as a lightly populated area of pioneer farming.

China has long had a number of concerns about its Korean-populated area. It worries that a united Korea might someday claim the region as part of its national patrimony, owing both to historical patterns of rule and to the ethnic background of its inhabitants. More immediately, it fears that a collapse of North Korea could generate a massive northward surge of desperate refugees across its border, where they would seek shelter in Korean-speaking communities. The border zone is already a place of tension and intrigue. Hungry North Koreans have been slipping into China for years, causing headaches for Chinese authorities and complicating already tense relations among Beijing, Pyongyang, and Seoul. Fewer people cross in the opposite direction, a far more perilous undertaking, but it does occur. In early June 2010, North Korean border guards shot and killed three Chinese citizens who were trying to cross the border, claiming that they were either seeking to conduct illegal trade or to spy for South Korea.

Concerned about the security of its Korean border zone, China has sought to incorporate its Korean-speaking minority into its larger national community while continuing to respect its basic cultural rights. This endeavor has proved relatively successful. Enrollment in Korean schools is rapidly declining, as education in Mandarin Chinese is increasingly desired, mostly for its economic advantages. Han Chinese and other non-Koreans have also moved into the Korean zone in large numbers, just as large numbers of Korean Chinese – almost half of a million in 2009 – have moved to South Korea. As a result, the Korean proportion of the Yanbian Autonomous Prefecture has dropped from almost two-thirds in the early 1950s to about a third at present.

By all indications, China’s Korean community seems reasonably satisfied with its political situation, showing few signs of wanting to separate from China. But general strains between Korea and China still focus on the border region, many of which concern historical representation (to be explored in tomorrow’s post). One particular flashpoint is Mount Baekdu, located on the China-North Korea border. Widely viewed as the place of origin of the Korean people, Baekdu is one of Korea’s three most important sacred mountains. Many South Koreans believe that the entire volcanic peak is rightfully Korean territory, arguing that its northern slope was illegitimately ceded to China by the northern regime during the Korean War. In 2007, South Korean athletes at the Asian Winter Games infuriated Chinese officials by holding up signs proclaiming Korean sovereignty over the entire peak. South Korean nationalists are angered by China’s development of a tourism industry on its side of the mountain, as well as by its use of the term Changbai Mountain, which some see as an attempt to pry away a key natural symbol of Korean identity.

Professor Guofan Shao of Purdue University has recently determined, through Google Earth analysis, that North Korea is massively logging its slopes of Mount Baekdu, despite its status as a Biosphere Reserve. Such activities are not surprising, as a largely deforested North Korea faces severe lumber shortages. But the situation is tragic: according to some experts, “Mount Paekdu [Baekdu] along with adjacent areas in China possesses the world’s highest plant diversity found in a cool, temperate zone.”