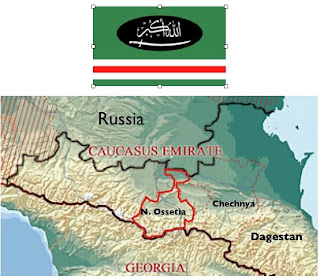 In the global hierarchy of polities, a “self-proclaimed virtual state entity” occupies a lowly position, being little more than a dream. But such dreams must be taken seriously if they are accompanied by violent actions intended to make them come true, as is the case in regard to the Caucasus Emirate. This Islamist “virtual state entity” claims (eventual) dominion over the northern Caucasus Mountains and adjacent lowlands. Currently part of the Russian Federation, the northern Caucasus is divided into handful of internal Russian republics, including Dagestan and Chechnya. Although violence in the region has diminished in recent years, it has hardly vanished. On February 3, 2010, for example, Russian security officials claimed that they killed a top Al Qaeda operative, Mokhmad Mohamad Shabban, in the mountains of Dagestan (see http://www.itar-tass.com/eng/level2.html?NewsID=14783934&PageNum=0).

Any efforts to create an actual Caucasus Emirate will be strenuously resisted by Russia. They also clash against the designs of another “self-proclaimed virtual state entity,” that of the Chechen Republic of Ichkeria. This Chechen republic was proclaimed in 1991 as Chechnya unsuccessfully tried to secede from Russia. In 2007, its “president” merged the “republic” into the much larger “Emirate,” thereby reducing its status to that of a mere (virtual) province. Many Chechen insurgent leaders rejected this move, preferring to fight for an independent, stand-alone Chechnya.

The so-called Caucasus Emirate aims to unite all of the Muslim areas of the northern Caucasus into a single state. Its proposed territory, however, includes a substantial non-Muslim area, the Russian republic of North Ossetia-Alania. The Ossetians (or Alans) are mostly Christians, although a few are Muslims and many still practice quasi-pagan rituals. Tensions between Christian Ossetians and their Muslim neighbors can be severe. In 2004, for example, Chechen and Ingush insurgents took more than 1,000 people hostage in a school in the Ossetian town of Beslan, an event that resulted in some 385 deaths.

The Ossetians, a surviving remnant of the once-powerful Sarmatians, are a people of profound world-historical significance. It is believed by many scholars that most of the legends of King Arthur can be traced back to the Ossetians’ Nart Sagas — but that is a story for another post.