The Spanish policy of preserving national unity by devolving power to the regions faces three main challenges. First, some groups remain unsatisfied, pressing for enhanced self-rule or even outright independence. Second, members of several smaller unrecognized groups seek to hive off their own autonomous communities. Third, the borders of the existing autonomous communities poorly correspond with those of the cultural groups on which they are ostensibly based, as discussed yesterday in Languages of the World.

The big problem is the call for outright secession in the Catalan- and Basque-speaking areas. Most Basques and Catalans want more autonomy, and many would be content with nothing less than full sovereignty. Independence-seekers in these two regions have adopted divergent strategies. Hard-core Basque nationalists have long embraced militancy, attacking the Spanish state and its institutions with bombs and guns. Catalan nationalists, on the other hand, have almost entirely eschewed violence in favor of public demonstrations and electoral politics. In an important recent article in Foreign Policy, Paddy Woodworth argues that the former policy has been a dismal failure and the latter a marked success. Not just Spaniards at large, he contends, but the majority of Basques themselves have been so disgusted with the terrorism of the separatist ETA (Euskadi Ta Askatasuna) that the movement for Basque nationhood has lost its impetus. Catalan nationalism, by contrast, is gaining ground. Catalan stalwarts have long insisted on recognition as a nation and not a mere nationality, generating untold tensions with the central government. Where Catalonia leads, other regions tend to follow. The current Spanish Prime Minister, José Luis Rodríguez Zapatero of the Spanish Socialist Workers’ Party, strongly backs regional autonomy, encouraging the Catalan parliament to press its demands. With Zapatero’s support, the Spanish parliament recently accepted Catalonia’s status as a nation. In July 2010, however, the Spanish Constitutional Court overruled the maneuver, arguing that there can only be one nation in Spain. The decision prompted outrage in Barcelona, inciting an estimated one million people to take to the streets. As Woodworth observed,

[The protests] were led by José Montilla, leader of the PSC, the Catalan chapter of Zapatero’s party, who described the decision of Spain’s highest court as “offensive.” The tone of the march suggests that many Catalans who would have been content with even the watered-down statute are now shifting towards demands for complete independence. Montilla was repeatedly abused by pro-independence demonstrators, who appear increasingly to reflect the popular mood. 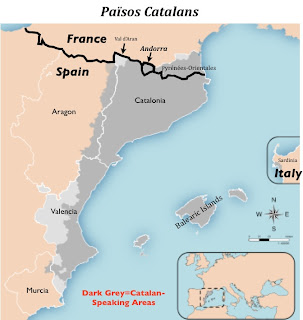 Other sources have ascribed an economic rationale to Catalonia’s surging independence movement. Catalonia is one of the wealthiest parts of Spain, its tax receipts subsidizing the poorer parts of the country. With Spain’s current economic crisis, many of the region’s residents feel that they can no longer afford to support Extremadura and other poor neighbors. According to a recent Los Angeles Times article, this is one issue that binds indigenous Catalans with migrants from other parts of Spain: “Newcomers from Andalusia or Aragon may shrug at warm-hearted appeals to protect Catalan culture, but they respond to hardheaded arguments about their tax money being spent on schools or hospitals far from Catalonia.” But as the map posted above shows, economic considerations cannot explain the different trajectories of Basque and Catalan nationalism, as the Basque region is even more productive than Catalonia.

Whatever the reasons for Catalonian separatism, it will be interesting to see whether Woodworth’s assessment of surging support will be confirmed in upcoming elections. In the 2008 Spanish General Election, the independence-seeking Republican Left of Catalonia lost five parliamentary seats, taking only three. But as the Electoral Geography map posted above shows, most Catalonian districts rejected the nationally dominant center-left and center-right parties to support the local coalition called Convergence and Union, which supports augmented autonomy while remaining ambiguous on independence.

Even if Catalonia were to become an independent country, the aspirations of hard-core Catalonian nationalists would not be satisfied. Such people seek sovereignty not merely for their existing autonomous community, but for all Catalan-speaking areas: the Països Catalans. In addition to Catalonia proper, this region includes the Balearic Islands, most of Valencia, and parts of both Murcia and Aragon in Spain; it also potentially encompasses the entire micro-country of Andorra, most of the French department of the Pyrénées-Orientales, and even the Italian city of Alghero on the island of Sardinia. Sentiments in favor of such a greater Catalonia, however, do not run strong outside of the autonomous region itself. In the early 1980s, the possibility that much of Valencia might be incorporated in an expanded Catalonia prompted an anti-Catalan reaction and even a few physical attacks. Inhabitants of Valencia opposed to the Països Catalans idea insist that Valencian is a language in its own right, not a dialect of Catalan.

Even within the autonomous community of Catalonia, a common national identity is far from universal. Many residents hail from other parts of Spain, and feel put upon by the constant cultural demands of local nationalists. And in the far northern Catalonian comarca (county) of Val d’Aran, the indigenous inhabitants have their own speech, Aranese, considered a dialect of the southern French language of Occitan. The commentator “Ninja,” writing in response to the Foreign Policy article cited above, argues that, “There is also a nascent movement for the independence of Val d’Aran as they speak a different language, Occitan, and have an unique identity.” With a population of 7,130, Val d’Aran would make Andorra seem like a populous country.