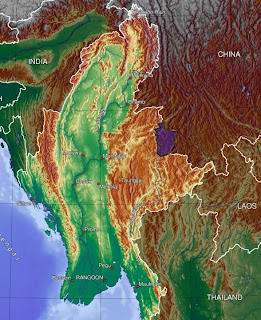 As recently mentioned in this blog, James C. Scott’s new book The Art of Not Being Governed is essential reading on the history of state-level sovereignty. As Scott brilliantly shows, pre-colonial states in Southeast Asia, and much of the rest of the world, actually governed relatively small areas. Our conventional historical maps are thus highly misleading, as they tend to show traditional kingdoms ruling over vast areas that remained well outside of their actual spheres of power.

In much of the world, as this blog seeks to demonstrate, state sovereignty is far more limited. Consider Burma (Myanmar), which has never fully controlled the area that is depicted as forming its territory on our political maps. In the 1990s and early 2000s, Burma did indeed defeat its major “domestic” adversaries, the main ethnic armies associated with the Shan and Karen peoples. It was able to defeat the Shan, however, largely by allying itself with the ethnic group known as the Wa. Since that time, the Wa have formed a virtually sovereign state within Burma (“Special Region 2”), which they have defended with their own militia, the powerful United Wa State Army. The Wa state has hardly been a tribal paradise, as it has supported itself largely through the narcotics trade, gambling, and human trafficking, but that is beside the point. Whatever its merits or lack thereof, the Wa state has remained outside the grasp of Burma, contrary to what our maps and our general model of the world tell us.

In mid-2009, Burma figured that it had grown strong enough to take on the Wa and other ethnic militias and thus extend its power to its internationally recognized boundaries. It ordered militia commanders to fold their forces into the Burmese Army or face the consequences. In August it routed the Kokang, an ethnic Chinese militia allied with the Wa. Thus far, however, it has done little more than threaten the 20,000-strong United Wa State Army. On December 25, 2009, however, the Shan Herald reported that “The United Wa State Army (UWSA) and [its allies forces] the National Democratic Alliance Army (NDAA) are purchasing thousands of protective suits against possible chemical warfare by the Burma Army, according to sources close to the said ceasefire groups. The buying spree was prompted by intelligence reports that the Burma Army was planning to destroy Wa and Mongla’s defenses ‘by using airpower, firepower and chemical weapons.’”

Perhaps the defeat of the Wa state and the incorporation of its territory into Burma is inevitable. I would not, however, be willing to bet on it.